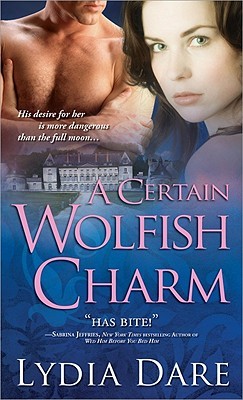 Infuriated over the Duke of Blackmoor's flagrant disregard for his ward after several attempts to contact the blackguard via letter, Lily Ruttledge, the Aunt of the twelve-year-old Oliver, is left with no option but to track the man down. She will force him to pay attention to the rising crisis of a boy who is changing in ways that are starting to scare the normally unflappable Lily. One conversation with Your Grace Simon Westfield, however, and all she wants to do is wring his neck. And if he didn't kick her out of his home and shove her back into the carriage that brought her without hearing a word she said, she would have done just that.

It was far too close to the full moon for Simon to have a delectable little morsel like Lily in his arms. The beast inside him was wild enough as it is. When his highly observant butler mentions that Lily's fears over the changes with her nephew sounded quite similar to Simon's particular history, however, the Duke is horrified that he'd let the child's development go untended for so long. He races after Lily's coach...and if he's just as interested in seeing the tall beauty again as he is in bringing Oliver to heel, well...it's not like he plans to bed her or anything.

Except everything about Lily stirs the man and calms the beast, and the longer she's in his house, the more he can't imagine her ever leaving. When a meddlesome neighbor intent on some pot stirring does what she does best, Lily ends up ruined and Simon - who swore long ago never to marry - assumes the blame for Lily's dismal future and takes her as his wife. And if the thought of Lily belonging to anyone else enrages him and the notion of any other woman but her in his bed leaves the former rakehell cold...well...it's not like he plans to make her his Lycan mate or anything. Really.

Lily knows Simon is keeping something from her. A secret so mysterious every attempt to discover it leads her in frustrating but widening circles. She may love her new husband, but she's determined to be done with secrets once and for all. Simon is doubly intent on keeping her from ever finding out. After all, if Lily were to find out that he is a werewolf, either she'd leave or he'd hurt her when she tried to stay, and above all else, that he definitely will not do.

Not without its own wolfish charms, A Certain Wolfish Charm is a light, easy read that had some genuinely entertaining moments. I'm particularly fond of growly wolves who act all surly and pouty when, in getting what they want, they realize they wanted something else entirely, so pretty much any scene about or surrounding the ball was a truly humorous delight. So were several other scenes, most notably whenever Simon's brother Will decided to poke at him, or when Lily went toe to toe with Simon.

I liked the characters, and though the tone of the book didn't lend to a lot of complex character development, I found there to be enough to enjoy. I think Simon started to get a little too bullheaded and was a bit too obtuse as things progressed later in the book, but sometimes he was just such an adorable little troglodyte I couldn't hold it against him.

I didn't care for the conflict of the book at all, though, and that does tie into Simon's actions throughout the story. The main conflict in the book is the secret that Simon is keeping from Lily. It's a secret almost everyone else, including the reader, knows, so it caused a few problems for me on several different levels. In fact, I never felt like it was a plausible conflict to begin with. Simon lies and hides the truth from Lily again and again because he was supposedly so paralyzed by the fear of ending up like his cousin Daniel (a man he acknowledged never had the training and control Simon did) despite Simon's lifetime experience of having parents as roll models who had a long, loving, and fully Lycan relationship. I didn't buy that at any point in the book. Nor do I find that sort of conflict in a plot arc to be compelling, original, or interesting enough to be the driving force in the book. It's a secret, so it's a foregone conclusion that the secret will be revealed, and because the book is a romance, there's not even a question of how it'll be resolved at the end. Then, when it finally was resolved, the actual resolution was nowhere near as ominous, dangerous, or threatening as it had been set up, warned about, and feared throughout the whole book. That's sort of the antithesis of climactic.

Other than the conflict not working for me, I wish the narrative had been developed differently. The story progresses quickly - too quickly, I felt, and instead of a gradual evolution of emotion and a natural progression of the relationship between Lily and Simon, their story read more like a Reader's Digest condensed version of a much longer and more involved book. The major points of transition in Simon's feelings for Lily, as well as his intentions towards their relationship, were leaped over and advanced without warning or set up, so the profligate who dipped his wick into every light skirt, cheating wife, and merry widow in the nation at the start of the book...a man who resolutely would not marry...became a fully committed and devoted, not to mention thoroughly monogamous lover of Lily, in astoundingly short order without much in the way of actual story to describe or note the change.

Still, I can't deny that several parts of the book were entertaining and enjoyable. Not everything worked for me, some things less than others, but other parts worked nicely. It's a Regency era romance, which normally doesn't hold much appeal for me, but in this case those aspects were tempered nicely by Lily's independent nature and fighting spirit. I also appreciated the glimpse into Will's future book as he and Prisca locked horns and traded barbs to my amused delight. That bodes well for his installment in the series.

Return from A Certain Wolfish Charm to Paranormal Romance Genre