A Demon Does It Better

Perplexed Me A Bit 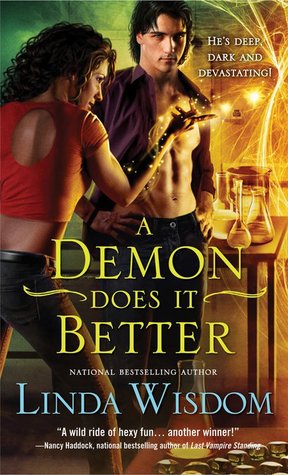 Disclosure: An ARC of this book was provided to me by Sourcebooks Casablanca publisher Sourcebooks via NetGalley. This rating, review, and all included thoughts and comments are my own.

As a powerful witch-healer, Doctor Lili Carter knows she is uniquely qualified to get a job at Crying Souls Hospital and try to figure out what happened to her good friend Sera. A new nurse at the hospital, Sera had been excited about her job. She and Lili had communicated almost every day, Sera trying to talk Lili into transferring and working there with her.

Then the calls and mail stopped. Abruptly.

When Lili got concerned and called the hospital after not hearing from her friend for days, she was told Sera didn't work there any longer, that apparently she'd failed to report in to work one day and no one had heard from her since. Now Lili is back at the hospital she once worked at decades ago. And it doesn't take long for her to figure out that something isn't at all right at Crying Souls.

After meeting the head of the hospital and getting her first look at the mental ward in the basement, Lili has a pretty good idea where to start her investigation. It's a dark, ominous place reminiscent of the worst madhouses in history. And the head of the hospital oversees it directly. It's painfully obvious some of the creatures down there are being mistreated. One of them, though, shocks Lili to her core.

She can barely believe her own eyes, but she's seen the prisoner more than once. Out of the hospital. First in Inderman's magickal plane, then again in her own house. But the sexy, charming demon who had mysteriously slipped through all her wards in no way resembles the filthy, battered creature in the dungeon-like cell. He'd been clean, first of all, and his clothes hadn't been rags. Oh, yeah, and he hadn't been criminally insane, either.

Shadow demon Jared knows he isn't going to be leaving Crying Souls anytime soon. Not after his own kind had been convinced he was mentally unstable. Still, he survives the torture and pain of incarceration, living for those minutes and hours when the shadows can spirit him away from his cell, slipping him out into the real world until his energy wanes and they pull him back.

He'd met the pretty witch on one such jaunt. Jared still wasn't sure how he ended up in her home the second time, but he's not complaining. He likes the feisty little healer. Really likes her. And even though he knows it's hopeless, Jared loves how determined she is to get him out of there.

But Jared knows the truth. No one is ever released from the dungeon under Crying Souls hospital. Not without dying first.

Given how I enjoyed the first book in Wisdom's Demons series, I had high hopes for this one. Unfortunately, the plot was a little chaotic and the characters didn't appeal to me as much as Maggie and Declan did in the first book. I didn't dislike Lili or Jared, really. They didn't do anything particularly annoying...well...other than Jared's habit of reminding Lili that demons do it better - that got old for me relatively quickly. They didn't stumble across any of my lines, though, or push any of my big character no-no buttons, so that was good. I just didn't connect with them and didn't think their chemistry was particularly strong. Nor did their romance seem based on anything more substantial than a physical chemistry that I couldn't quite feel.

The plot was another issue. There were several elements that lacked sufficient explanation for me. Little things, really, but the sum of them impacted my ability to just relax into the story. Why when Jared shadow located did he show up all clean and in nice clothes, unmarked from the abuse he suffered? Why, when Lili had proof of wrongdoing in the hospital, was she on her own to fight it? She hadn't struck me as a terribly powerful force, but she was intent on going against a very powerful force. Questions like that plagued me throughout the book.

Secondary characters had less of a role in this book that in the preceding book, and I didn't find them as varied and fascinating. The setting of the book was also, like the characters, just okay for me. I have no real complaints, but it just didn't appeal to me as much as the Guard compound and the house that Maggie had. The impression I was left with was that this book was just a little...smaller somehow...than the first book.

Like the first book, though, I thought the ending of the external conflict was a bit abrupt. Not as bad, but still a bit anticlimactic after the story elements that preceded it. What was there, though, didn't appeal to me. It seemed less an organic escalation of growing madness and nefarious intentions and more a bit contrived and forced to get the characters into the positions they found themselves in.

I was a little surprised that the second book had so little to do with the first. The only points connecting them in the series is the fact that both lead males are demons (which would explain the series title) and both heroines know each other as friends. The differences may appeal to some readers, but I was hoping for more from the Hellion Guard and some of the characters I met in the first installment. For those starting the series at this point, though, this book reads perfectly well as a stand-alone.

The good thing for me is that it's clear after two books that Wisdom can write creative, entertaining narratives. This one just didn't strike the same chord in me as the first did. I may not have been wowed by the elements in this story, and some of them weren't pleasing at all, but there is a style and sophistication in the way Wisdom puts her words together and creates story that does appeal to me. I really want to see if the next book is more to my tastes in character and story. 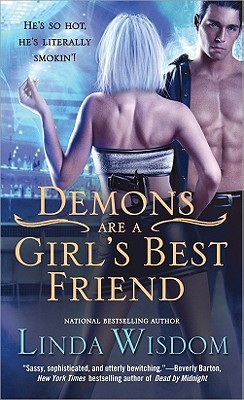 Return from A Demon Does It Better to Paranormal Romance