A Lady Can Never Be Too Curious 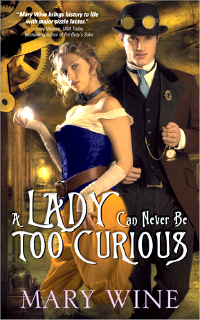 Janette Aston is a young woman ahead of her time. While her contemporaries are attending society balls and getting courted by wealthy and titled suitors, Janette is sneaking science circulars into her home and hiding them from her disapproving father. He wouldn't be happy with her interest in the Illuminists, a secretive order of scientists who are disdained by polite society.

Sneaking into their Solitary Chamber to listen to a lecture on electricity is the riskiest thing she's ever done, but thrilling in a way that stirs her unquenchable thirst for knowledge. Getting caught and being manhandled by Illuminist Guardian Darius Lawley, however, isn't the high point of the afternoon.

Darius takes his job as Guardian very seriously, even when tempted by the surprising and captivating Janette Aston. She's a rare Pure Spirit, though she doesn't know it. Unfortunately, she's also a member of the upper class, which should by all accounts make her off limits. It is illegal to recruit Illuminist membership, and even if Darius weren't the honorable rule-follower that he is, to do so would prompt Janette being shunned by society.

Problem is, now that her identity as a Pure Spirit has been revealed, she is in grave danger. If the Helikeians find out about her, they will take her and use her for their evil agenda...or kill her if she refuses to comply. And it didn't take five seconds in her company for Darius to know that compliance is not in the young woman's vocabulary.

As intriguing a world as Wine has created for this series, and as much story potential within the plot concept, I can't say this was one of my favorite steampunk romances. Despite a strong start with what seemed, at first glance, to be an independent and intelligent heroine and a rigid but honorable hero, the plot never quite came together for me, the world-building lacked the sort of defining explanation that would provide clarity, and the main characters got bogged down by less than appealing habits, which threw off the arc of their romance evolution.

I liked Janette well enough. Sometimes she took being headstrong a little too far, and she straddled an uncomfortable line between scandalized socialite and avid intellectual a little too often for my tastes, but she wasn't unpalatable. Darius, on the other hand, often was.

For a good majority of the book, he seemed completely incapable of conversing with Janette without coming off as either a sanctimonious prig or a doomsday prophet. I found him tedious and two dimensional. I'm all for the noble guardian type, but there has to be a bit of evolution in his character as the story progresses or I end up just wanting him to spontaneously combust. That tends to but a crimp in the effectiveness of the romance.

Unfortunately, that was a large part of my problem with the book as a whole. It wasn't bad, and I certainly wouldn't say I disliked it, but it just wasn't as effective at keeping and holding my interest as I would have liked. The story was just a bit too muddled and hectic, the characters were inconsistent and a little limited, and the manner in which it all came together made it hard for me to really immerse myself in the story as it went along. I don't regret reading it, but I'm not anxious to dive into the next book in the series, either.

Return from A Lady Can Never Be Too Curious to Genres