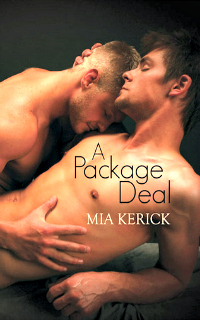 It started with a girl.

Grad student Savannah Meyers seems exactly the sort of complex and beautiful young woman that most reliably catches the eye and holds the interest of contractor Robby Dalton, and Robby is thrilled when she agrees to meet him for coffee.

It turns out to be a really good date. Sort of. At least, he thinks so. Honestly, Savannah's a little hard to read, but that's not necessarily a bad thing. Besides, she agrees to see him again, so Robby's very optimistic. And interested. Of course he's very interested.

He just wasn't expecting their next date to include another guy - one who obviously has a history...and a present...with the pretty Savannah. After that curve ball, a little confusion is perfectly understandable, right? Or a lot...given Robby's utterly stunned, mostly uncomfortable, yet undeniable physical reaction to the gorgeous and haunted Tristan.

After all, Robby's not gay. It's all about the girl. Really. Even if they're a package deal.

My feelings are so conflicted about this book. It's definitely like nothing I've ever read before, and I liked both the uniqueness of story and the wealth of emotion Kerick stirs with the personal journeys of main characters Robby and Tristan, with Savi's unconventional assist. It was gripping in places, heart-rending and painful. Other parts were soothingly, gently hopeful or sweetly, charmingly romantic. A good part of it was tense and a little confusing - in that totally good way of reading a story that's drawn you so deeply into a character's life that his or her perplexed discomfort becomes your own.

Then there were the parts that infuriated and frustrated me, both on behalf of the trials Robby and Tristan face (a testament to how affected I was by them), and in a less positive way at the story itself, which had a few elements that didn't appeal.

For the first three quarters of the book I was totally hooked. I absolutely loved this unusual, touching, emotional story. I loved Robby, with his befuddlement and earnest social awkwardness in the face of his complex and confusing reactions to both Savannah and Tristan. His journey locked me into this book and refused to let me go. And Tristan, the sweet man-child with a gentle soul and horrific past, made my heart ache.

He is such a broken young man, our Tristan, so fragile in so many ways, and yet there's such a guileless innocence and decency in him that I just wanted everything to work out for him, because he desperately deserved happiness, peace, and unlimited love.

It didn't matter to me in the slightest that the unconventional relationship between Tristan, Robby, and Savannah wasn't to my taste for romance. Frankly, the dynamic between Robby and Tristan didn't work for me in that regard, anyway, so I just stopped expecting any sexy M/M romance from the story early in. That helped tremendously.

In fact, this read much more to me like a coming of age story than anything else...except that all parties are already of age (despite the kid's card games and boyish nicknames). It was just far more effective for me as an emotional journey of self-discovery, acceptance, and healing than any sort of romance.

That's generally not something I like to read, but for the first three quarters of this book I was utterly and totally captivated by the characters and their lives. I loved everything about it. Well, okay, I loathed Robby's friend Mikey. From his introduction he did nothing but disgust me. That wouldn't have been too big a problem, though, if it didn't also draw Robby's strength of character into question for putting up with him for so long.

Still, I was dealing with that well enough right up until the incident between Mikey and Tristan. That's where the story started to stumble for me. The aftermath of that scene did more than draw Robby's strength of character into question. It obliterated it, as well as any respect I had for him as a human being for his response - or astounding lack thereof - to what Mikey had done. But it got worse, because there was also Robby's father.

Again, the problem wasn't that Robby's father wouldn't be winning any Father (or Husband) of the Year awards. He's a controlling, close-minded homophobe, but I expect to encounter at least one in stories of this type, so while I detested him, he was not the issue. No, it was Robby's choices and actions after the inevitable face-to-face with the man that derailed the story for me and put another series of large dents into Robby's knight-in-tarnished armor.

By that point in the story, I was hating on Robby almost as much as I was on his dad and Mikey. Fortunately, it was relatively near to the end of the book. Unfortunately, the too-abrupt resolution to everything didn't quite redeem Robby to me before the story ends, so in general the book ended in a less positive place for me than it was throughout the first three quarters of the story.

It also begs mentioning that the book's cover art, which practically oozes an implication of hot, sexy, mature content, utterly fails to reflect the New Adult tone of the story and the extremely tame (mostly glossed over) sexuality in the two brief scenes in which sex occurs. The cover is sexy and beautiful, no argument there, but that art shouldn't be on a book with a story that refers to a man's dangly bits as his "privates" during the only moderately descriptive sex scene in the whole book. Fortunately, it didn't affect my opinions of the story, but that's only because I didn't see it before I finished the book.

I didn't read the review, but saw the rating. I was a bit iffy on the book, but I think I'll try it now. Will come back once I've read it :)

As always, Mariana, I'm curious to know what you think. I hope you enjoy it!

Return from A Package Deal to LGBT-M/M Contemporary Romance

Return from A Package Deal to One Good Book Home