A Reason to Believe 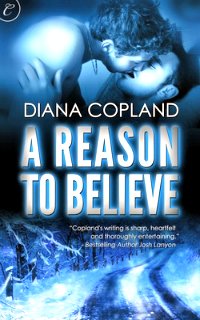 No one wants to get cases involving kids. It doesn't matter that it is the first real case Detective Matt Bennett had been given in the fifteen months since his world exploded, when he not only lost his partner, but had the full nature of his personal relationship with the man become public knowledge. No one wants kid cases.

And no one wants to be standing in the house of frantic parents before dawn on Christmas Day, watching his or her captain question those parents about the timeline of their six-year-old daughter's disappearance.

Regardless of what Matt wants or doesn't want, that's the grim reality of his situation. Or it is until he hears the first giggle, then the words that draw him down the stairs to the basement of the house. That's where Matt finds Abby. Where he sees her, speaks to her. And then his reality takes a detour into a hellish nightmare, because the missing little girl with the too-large eyes and so-pale skin vanishes just after she points him to her own corpse.

Forced off the case and onto administrative leave after he unwisely tells his captain he saw Abby's ghost, Matt is at lose ends. Then his best friend drags him to see Kiernan Fitzpatrick, a well-known medium. Ghostly encounter aside, Matt is highly skeptical, but even the staunchest skepticism falters under the weight of one small little ghost who keeps making her presence known.

To catch a killer, Matt is going to have to believe. In ghosts, in Kiernan, and maybe, after all this time and everything he's lost, in the power of love.

Wow, this book is just a whole lotta awesome. With layered, sympathetic characters who had complex personalities, flaws, and foibles, and a solid plot that ran my emotions through the wringer, this book delivered pure reading entertainment. The romance arc was well-paced, with a relationship evolution that maintained a believable timeline, and Copland did a very nice job balancing that evolution with the murder mystery storyline.

The crime against Abby was truly horrifying and tragic, and sometimes very hard to deal with, but the sweet, sexy, and sometimes scorching hot yumminess that started building between Matt and Kiernan from the moment they met helped keep that horror from overwhelming the narrative. That's always a delicate balance for me, because stories that feature crimes against children always hit me harder than the rest.

I liked Matt a lot and I adored Kiernan. Matt was the broodier, more wounded of the two, and sometimes - especially in the beginning - I wanted to smack him around a little for his attitude, but Kiernan had the exact right amount of good-natured acceptance and easy charm, bordering on boyish enthusiasm, to draw Matt out of his grief prison and give him what he needed to finally heal from his past. They were great together.

And Kiernan's tee shirt slogans were a total riot.

Admittedly, I have a soft spot for ghost stories, so I was predisposed to liking the tale, but it was Copland's imaginative, wonderfully descriptive storytelling and authorial voice that really brought it home for me. The whole book felt very well rounded, offering everything from ghostly spookies to gritty crime, touches of humor, hot sex, and heart-melting romance.

I fell in love with Matt and Kiernan as a couple and through them, Copland's writing. Though I had a few minor issues with a couple of plot points that seemed a tad cliched or predictable, the vast majority of this story was just great reading fun. So much so I was disappointed to find out this wasn't connected to a series. I would love to revisit Matt and Kiernan and their colorful family and friends, but I guess I'll have to settle for rereading this book to do so. Definitely not a hardship.

Return from A Reason to Believe to LGBT-M/M

Return from A Reason to Believe to One Good Book Home