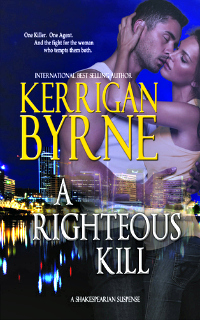 They call him John the Baptist, the serial killer who likes to nail young women to a cross and stab them in the side before dumping them into one of Portland's rivers. FBI Special Agent Luca Ramirez has been hunting him for months, driven to stop a madman before he can kill again.

He is just coming off a fourteen hour shift when he gets the call. Another body has been found at the river. She's been crucified like the others. Stabbed like the others. But unlike those poor lost girls, John the Baptist's latest victim is still alive.

Hero Katrova-Connor survived a nightmarish hell against all odds, but survival and safety are two different things, and the Baptist isn't done with her yet. Going undercover to keep her alive is just another part of Luca's job, but the longer the investigation goes on, his growing feelings for the woman get harder and harder to ignore. She becomes more than just a job to him. She's the woman he'll die to protect.

This series debut by new-to-me author Byrne hit so many of my Happy Reader buttons I was practically vibrating with book-crack bliss. The wealth of solid plot-driven suspense kept me on the edge of my seat, the humor that peppered the narrative was right up my alley, and Luca and Hero had so much sexual chemistry sizzling between them that I was glad I was reading on my Kindle. No worry about the pages going up in flames that way.

Hey, it was a legitimate concern. Yowza.

The uber-alpha male Luca stole this show. He was rockin' the personal demons and aggression management disorder. Often grim, sometimes broody, with a fairly bleak self image, he thought himself little better than the monsters he is so good at catching. That would have been more than enough to appeal to me, but in Luca's case, there was this whole other level to him that completely stole my heart.

He was just so completely and obviously butt over brains for Hero from the moment they met, fighting it every step of the way (of course) out of a mix of professionalism (or, you know, fear) and male stupidity, and was utterly endearing for all of it. Well...if a gun-toting, foul-mouthed, hot-tempered, four-hundred-dollar-shoes-wearing alpha male can be called endearing. His struggle with his desire for Hero was the source of many humorous moments in the book and I savored them all.

Then there's Hero. Artist. Yoga instructor. A little bit of a hippy. She celebrates her individuality and embraces her sexuality. Strong, independent, spirited, maybe a little sheltered, she is the best thing to ever happen to Luca and she knocks him for a loop, tickling me pink in the process. Her personality was a breath of fresh air and I loved how she acts and reacts to things in the story.

And there was nothing I loved more than the fact that while Hero may have been victimized by a serial killer, at no point in the book was she ever a victim.

Serial killers are my favorite type of Bad Guy in romantic suspense fiction and there was a very solid plot arc surrounding John the Baptist in the book. It could have been given a bit more prevalence in the story at times. There were a few places I thought the story was focusing a bit too much on the evolving relationship of the main characters and not quite enough on the murder investigation. To be honest, though, that's not really a complaint. I loved Luca and Hero so much that it didn't really bother me their relationship arc got more of the story's focus, but I would have liked just a bit more balance in places.

That said, if it came down to choosing between better balance and giving up a single moment of the several stellar scenes with Hero's family, then I'm happy to live with the imbalance, because the Katrova-Connor clan stole every scene in which they were included. Admittedly, the book's prologue threw me a little at first, but when Bryne ties that scene to Hero's family dynamic further into the book, I was totally sold and seriously crushing on every single person in the Katrova-Connor clan.

Frankly, there just wasn't anything in the book that I didn't like. It was a fun, sometimes serious, suspenseful, dangerous, smoking hot read with characters that explode across the pages with vibrant intensity. I'll be keeping my eyes peeled for the next book in the series, anxious to get those Happy Reader buttons pushed yet again.

Okay, now she was just being a bitch, but at least she could fortify the moral high ground by avoiding being childish. Because he started it.

"I thought you were a vegetarian."

"I am." Hero closed her eyes to savor the smell. "Thus the Tofurkey."

She shrugged. "Well yeah, but it's bacon."

"Bacon is meat. It comes from a pig," Luca said.

"It doesn't count as meat because it's bacon." She was looking at him as though he was the one who'd lost his mind.

"That makes no sense."

Return from A Righteous Kill to Romantic Suspense

Return from A Righteous Kill to One Good Book Home