A Rush of Wings

A Dark and Ambitious Series Debut 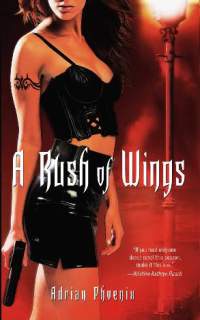 For three years FBI Special Agent Heather Wallace has tracked a killer as he cuts a swath of sadistic torture and bloody death across the country. The trail leads her behind an underground club in New Orleans, where the latest victim has been left bloody, raped, and forever broken, and a message - the killer's first - is scrawled on the wall in the victim's blood. Is Heather wrong? Has the Cross Country Killer changed his MO at this late date? And if so, why?

The answers to those questions open the FBI agent up to a dark world beyond her wildest imaginings, a world of vampires, fallen angels, and government conspiracies. Of psychopaths born, made, and hidden behind the faces of mad scientists. At the center of a hellish firestorm stands Dante: nightkind, True Blood, and goth rocker beloved for his edgy style and angelic looks...tormented, tortured, suffering a debilitating and paralyzing loss of memory, his childhood a blank, buzzing slate of icy misery.

Once firmly ensconced in her world of black and white, Heather has to embrace all manner and shade of gray as she stands beside this young man, intent on protecting him from the forces trying to destroy him. Whatever their source.

Dark and at times disturbing, A Rush of Wings kicks off a complex, original dark urban fantasy series that features a plethora of bad guys with overlapping and often conflicting agendas, where the blood drinkers aren't nearly as bad as the human contingent, and where morality is questionable, flexible, malleable, or nonexistent, depending on the circumstances. The many shifting points of view and the slightly overpopulated cast of bad guys did get a little overwhelming at times, declaring open warfare against the world building and character development aspects of the story...and winning. It muddied the waters more than a little, especially towards the middle of the book, but it was worth sticking it out to the end.

I wish there had been a little more development given to Heather and Dante, both as individuals and together, as I felt that their characters became too easy to overlook or miss completely when viewed beside the full scope of the things going on around and being done to them. It felt like there was just a bit too much story in it - too many subplots and minor arcs in this non-stop adrenaline ride. From beginning to end there just weren't any moments of quiet or down time in which the characters got to breathe a little or the world got to be explained a bit. It was definitely dark, and I like dark books, but some of the best parts of a dark tale are the quiet moments given to the readers to let them form attachments to the characters the author then plans on heinously torturing...not to mention the occasional glimpses of hope and light through the darkness, no matter how small those glimpses, and there just wasn't any of that in this book.

Maybe it sounds like I didn't like A Rush of Wings, and that's not the case at all. I did like it, and I appreciated it for the very thorough, technically skilled book that is is. Adrian Phoenix has her own voice and style that is both recognizable and appealing. She writes a tragic, atmospheric tale that is at turns heart-breaking and stomach-turning.

In truth, I'm not totally sold on Dante as a character, as he has some personality issues that I don't always find appealing, and I was pretty ambivalent about Heather throughout the book. I feel for Dante's plight, though, even when I don't necessarily like his actions or think very highly of his attitude, and I do find his journey compelling. His future is shaky and teetering between uncertainty and utter destruction, and that's best case scenario. His past is utterly horrifying. His story...worth reading.

Return from A Rush of Wings to Urban Fantasy Genre

Return from A Rush of Wings to OGBDA Book Review Home