Has Its Ups and Downs 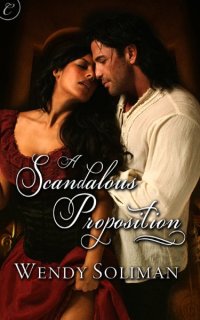 Disclosure:   An ARC of this book was provided to me by Carina Press via NetGalley.
This rating, review, and all included thoughts and comments are my own.

Fresh from the cold and bloody battlefield of war and worn in heart and soul because of it, Lord Adam Fizroy has stopped for a brief repast while on the journey back to his family estate when his private dining area is breached by a seductively beautiful woman...who is quite obviously in need of his help. He is captivated by her exotic beauty and honor-bound to assist the woman, a Mrs. Smith. He secrets her away from the brute who is chasing her and drops her off at a vicarage not far from his home.

Imagine his surprise and abject disappointment, then, when the same captivating woman bursts in on him yet again just an hour later after he's taken himself off to the familiar arms of an old friend and bawdy house proprietress. Or his fury and horror when the seductive little liar is also introduced the next morning as his own dear mother's companion.

Not only does the female lie exceptionally well, but she's one of the most brazen bawdy ladies he's ever had the misfortune to meet! Adam is highly vexed and intent on bringing the dangerously seductive Mrs. Smith to heel. And he is not above using a most scandalous proposition to do so.

Florentina Grantley is incensed by the gall of Lord Fizroy, she being a widow, not a lady of ill repute, but she's also in a very precarious position. She must not lose her position with the Lord's mother. Too many people, her youngest siblings in particular, depend on her and the benefits her position and the location affords. Lives are at stake, after all.

Left with no choice but to knuckle under and accept Lord Fizroy's indecent proposition, she's both stimulated by the thought and terrified. She is not the experienced woman he will be expecting to please him and unless she can pass as exactly what he thinks she is her cause will be lost...along with the lives of countless innocents she's determined to save.

I'm not at all ashamed to admit that I squealed a little in fierce female pleasure when I realized that Florentina's character was written to have been a spy for the British back in her native country of Spain, guiding troops and providing information against the occupying forces of France during the early years of the Napoleonic Wars. This was, of course, before her arrival in England - the details of which form the motivation for almost every single one of her actions in the book.

I loved the idea of a female lead so well versed in rebellion and so proven in indomitable spirit. That's my kind of heroine. Pity the male lead, Adam, was such a hypocritical wanker in comparison, really. And I don't care what sort of justification Florentina's prostitute friend gave for Adam's words and actions, his unguarded and razor-sharp disdain for the possibility of Florentina being a prostitute given where he spends his randy times and how dear a friend he considered the bawdy house's madam to be just turned me off him completely.

Then came the night of the propositioned meeting and...well...everything shifted a little and the book really started to roll.

I ended up being fairly amused and impressed with Adam and too frequently perplexed by Florentina, who, for being a spy and repeatedly claiming she was capable of handling herself, proved to be more timid than I would have expected, with a nature that was more on the prim an proper side. And she was a horrible liar who got herself into trouble all the time through a series of questionable actions and rash decisions. Her character wasn't by any means unpleasant, but her personality and actions definitely seemed in conflict with her backstory to me.

The human trafficking storyline was quite nicely done. I found that part of the book highly entertaining. I wasn't fond at all of the threads surrounding Adam's ex-intended, who is now the current wife of Adam's brother, the Duke. That whole plot line didn't appeal to me, and it was a significant enough part of the book to create some overall dissatisfaction, especially after the conclusion, which seemed very anticlimactic and odd to me.

The concept of the book and the originality of the characters would have maintained their appeal had the book been more even and the characters more consistent. As it is, it's a book with high points and low points, with characters I liked very much in some spots, but absolutely couldn't tolerate in others. Some things went well, some things didn't. Not everything was explained well or fully fleshed out, but some things were wonderfully detailed. Overall I was left thinking that the book had it's ups and downs.

Thank you so much for reviewing my book and detailing which bits you did and didn't like. It helps an author a lot to know such things and your expressed your views very clearly.

Thank YOU Wendy for taking the time to comment on my review, and for using your abilities as an author to bring entertainment to your readers.

Return from A Scandalous Proposition to Historical Romance

Return from A Scandalous Proposition to One Good Book Home