A Touch of Crimson

Has Both Potential and Problems 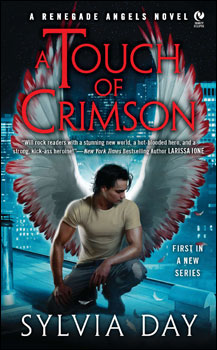 Disclosure:   An ARC of this book was provided to me by Signet Book publisher Penguin Group USA via NetGalley. This rating, review, and all included thoughts and comments are my own.

Lindsay Gibson has always known she's a bit...different...than other people. The weather speaks to her, for one thing. She can sense evil, for another. Oh...and she hunts and kills vampires. Not as a day job or anything, because the pay sucks, but because when she was five years old she watched in horror as a vampire murdered her mother. Since Lindsay was old enough to wield a knife, she's been driven to find the one responsible and end her...taking out as many of the monsters as she can along the way.

The differences that define her also segregate her, forcing her to keep relationships superficial at best, non-existent most of the time. And until she looks across a crowded airport and set eyes on Adrian Mitchell, she was mostly okay with those sacrifices. One glance of such a powerfully, viscerally stunning male, though, changes all of that.

Actually, it changes absolutely everything about and in her life. Lindsay just doesn't know it yet.

As soon as Adrian meets Lindsay's eyes across a crowded terminal, he knows. His beloved Shadoe, the mortal woman who both damns his soul and completes it, has returned in yet another vessel. Generation after generation he's waited for her rebirth, his existence focused on savoring her for however long he has with each new incarnation. The past two hundred years without her have been the longest she's been gone from him and he's been going a little insane from the loss. Now she's returned to him and the cycle has started once again.

Her father Syre, the former Watcher whose wings Adrian himself had severed, spawning the race of Fallen and their vampire children, will be vying to claim her, to turn her into one of his kind. Adrian, head of the elite group of Seraphim warriors tasked with keeping the Fallen in line and slaying the vampires that break their laws, will do everything to stop him. Even though his own crimes match those that caused the Watchers to Fall in the first place.

As loyal as Adrian is to his Creator, as dedicated as he is to his job as the Seraphim Special Ops leader, he will stop at nothing, do anything, to save Shadoe's soul from Syre's clutches. He loves her with a passion that is frightening in its intensity, however wrong that love is, and he will not fail her again.

Even if he has to wage a war to keep her.

I have to give Sylvia Day credit, she doesn't start small. There are so many different story elements and plot points, rising insurgencies, conflicting motivations, character backstory, and conflicts in this very full series debut that it could have been comfortably split into three separate books. On one hand, it made for a very complex world and story, the kind I like with lots of gray areas and no clear black or white lines which too easily differentiate the alleged good guys from the not-so-good guys, or even the totally-bad-guys. On the other hand, I felt too much of the meat of the external conflict book arc took a back seat to the will-they/won't-they tug of war that was the romance arc between Adrian and Lindsay, to the detriment of the book as a whole.

That being said, I had absolutely no trouble seeing the wealth of potential in the series. I love that the Seraphim aren't perfect. The Sentinels treat the lycan like slaves - like dogs, even. The Fallen aren't all bad, either, and I found them sympathetic after spending some time with Syre and Torque. The Sentinels' opinions of both lycan and Fallen is terribly antiquated.

The lycans' growing dissatisfaction is completely understandable. It's so easy to sympathize with their desire to be free from the angels who consider them indentured servants. I loved Elijah and want much more of him. One thing is very clear, as a war seems to be imminent, the enmity between the Fallen and Sentinels will need to change if either have hope of surviving.

Despite the truly meaty world building, intricate mythos, and densely-woven plot threads that made the best parts of the book shine brightly, several issues popped up as I was reading and many things didn't thrill me. I can't say I enjoyed how it all began. The first third of the book felt rushed and crammed with what felt like repetitious reiteration of the dangers inherent in the relationship between Lindsay and Adrian. The last couple of chapters felt abrupt and lacking in any sort of solid conclusion or sense of accomplishment for any of the many and varied external conflict plot threads.

I also have to admit, the longer I think about the mythos that's been created for this series, the more I struggle with seeming contradictions, murky definitions, and hypocrisy. If I understand what I read (and believe me, at this point, that's debatable), souls seem to be what makes a person a person, imbuing them with their identity, and souls don't survive the Change. But Syre is Fallen and his son Torque is Minion. Both seem to be who they were before Falling/Changing, even though they would have lost their souls in the Change. They certainly seemed intent on recovering Shadoe's soul as their daughter/sister, and Adrian is all about Lindsay's soul being what makes her Linds.

So...which is it? Are souls tied inextricably with personality or not? What personality changes do Fallen and Minions go through when they lose their souls? It doesn't seem to make them inherently evil...Lindsay didn't sense evil in Syre and Torque. It doesn't seem to always change their personalities, either. I found that all very nebulous and confusing, and given that it's such a major element of the main plotline of this book, the lack of any clear definition and the seeming contradictions were an issue for me.

Not my largest one, however. That's reserved for Adrian's hypocrisy. There are hundreds of instances in which he committed the same crime as the Watchers - during every one of Shadoe's incarnations, in fact. So why hasn't he been punished as grievously as the Watchers were? Why hasn't he at least stepped down long before now if he's at all honorable? He chases down Helena days after he finds out about her indiscretions. He sliced the wings off Syre so shortly after his that his mortal children were still young (though I'm still unclear if Nephalim are mortal, so I may be wrong about that). Why does Adrian get a pass for thousands of years?

The book addresses Adrian's hypocrisy, and he acknowledges it, but that certainly doesn't excuse it. It also doesn't forgive the seeming contradiction between what Adrian tells Helena and his own situation with Lindsay at the end of the book. Unless, of course, I seriously misunderstood or missed something in the story - which, like I said, is entirely possible.

I have to admit, it sure feels like I did. And I guess, when I think about it, that's its own problem, isn't it? I started the book, read through it, enjoyed some parts more than others, had a few problems of varying significance, and finished the book. Still, despite my excitement over the potential for subsequent books in the series, I can't help feeling like I missed something big in this one.

Return from A Touch of Crimson to Paranormal Romance Genre

Return from A Touch of Crimson to OGBDA Book Reviews Home