A Wolf in Wolf's Clothing

Love and a Touch of Magic 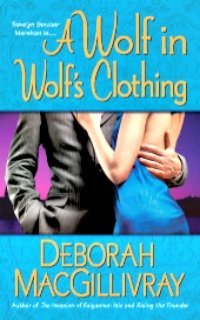 It was supposed to be a simple task, really. Doing his part in his eldest brother's plan to bring down the company of the man responsible for their father's suicide, Trevelyn Mershan goes undercover to get close to Raven Montgomerie and use her to get close to her brother Cian and the business the three Mershan brothers were preparing for a hostile takeover. But it bothered Trev on a deep level that he hadn't been able to get the beautiful Raven out of his mind since first seeing her months previously - in ways that had nothing to do with a life-long game of revenge.

When he finally speaks to her for the first time, finally gets a chance to have her in his arms, he quickly realizes that the woman is more than fair in face and form, she's beautiful in heart and mind. And he wants her. Torn between duty to his brothers and love for his woman, confused by mystical forces he doesn't understand and isn't sure he believes in, Trev feels his carefully planned life slipping out of control...and into dangerous waters that may strip everything he cares about from him. Including the woman he loves.

There is much to like about this contemporary paranormal romance, and I was surprised to find myself enjoying it as much as I did, though I'm not sure why I had such low expectations - maybe because I haven't read anything else in the series and I'm leery of picking up in the middle like I did. In fact, it was my first Deborah MacGillivray read at all, but it was comprehensive and thorough and easy to appreciate as a stand-alone book, even with the concept and subplot that was built around the three brothers, which I'm sure was initiated and further developed in the first and second books.

I liked Raven quite a lot; the unprepossessing lifestyle independent of her family's wealth was an appealing aspect of her character and her love of all things wounded, needy, or one-footed was charming. Trev was more than just a chest thumping alpha male, he was quick to accept his feelings, even when they were less than flattering or caused conflicts, and I liked how he was able to accept the possibility of the mystical and embrace the lack of logic in magical potential. They were a solid couple, though I do prefer my female leads with a little more fight, and wish Raven would have handled her ex-husband Alex a little differently. That's strictly a reading preference, though, not a complaint.

There were some stylistic aspects of the book of which I wasn't fond. The narrative tended towards a slightly florid formality that seemed ill suited for a contemporary romance and, along with the setting, made it hard for me to remember that it wasn't a historical romance, until mentions of modern times and technology jolted me back into contemporary parameters. It didn't make for the smoothest read at times. I also felt the fairy tale and wolf themes were overdone. The Big Bad Wolf/Little Red Riding Hood (et al) references got a little heavy handed and I felt a little bludgeoned with the wolf theme overkill by the end.

Then there was the characters' annoying - and frequent - habit they had of talking to themselves. Muttering under their breath I could understand, but speaking full sentences to themselves all the time? Who does that? It felt very unnatural and I didn't like that method of storytelling for informing readers of character thoughts and feelings, especially when the book is written with the options offered by a third person omniscient point of view. It ended up feeling very awkward, and as the book starts with Trev having all sorts of conversations with himself - sometimes as he was looking at himself in the rear view mirror of his car - the book started on a rough note for me.

It got better, though, and I ended up liking it, with just a few reservations that were more about my preferences and tastes than anything else. The plot wasn't particularly ground breaking, and I wonder if I missed some important setup in the paranormal theme of the romance...maybe even in the first two books?...because while I liked the paranormal aspects, the mythology of it didn't quite seem all there in reference to the auld souls. It just wasn't quite fully realized or developed enough within this book to really blend well with the romance for me.

Despite those issues, I'm pleased I read A Wolf in Wolf's Clothing, doubly so to find another new-to-me author who has several books I can take a look at. I certainly don't think this will be the only MacGillivray book I read, and while there was definitely a sense of conclusion to the trilogy of the three Mershan brothers with the three Montgomerie sisters, I was pleased to find out that the author is planning on continuing the series with other Montgomerie sisters. That's good news for fans.

Return from A Wolf in Wolf's Clothing to Paranormal Romance Genre