Some Good, Some Not So Good 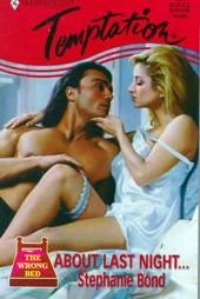 Janine Murphy has some concerns about her fiance and their upcoming marriage, but nerves are perfectly understandable for brides-to-be. Janine's concerns, though, are slightly less conventional. She's nearly thirty and a successful Physicians Assistant, but a combination of shyness in high school, work and med school after, kept her inner social butterfly firmly cocooned. She's a virgin, and in two days she's going to marry the very rich, eligible, and successful plastic surgeon Steve Larsen. They've known each other for a year, been engaged for six months, and yet it's Steve who has been so firm against them having sex before they exchange vows. And a random comment Steve made about the difference between the women you sleep with and the women you marry has been bothering Janine.

Now Janine's nervous they may not be physically compatible and wants to find out before they wed.

Goaded by her sister after her bachelorette party and feeling the liberation provided by the several alcoholic beverages she'd enjoyed during it, she dons one of her party gifts, a sexy little corset and panties set, pulls a long coat on over the scandalous (and wow - really uncomfortable) outfit, and heads across town to her fiance's hotel room. Her intent is to surprise him, then seduce him, and she talks her way into his room, climbs into his bed after ditching the coat, and starts to put the moves on him.

Tiny problem, though. The him she puts the move on isn't the him she's engaged to. In fact it's the surly and very sick Derek Stillman, in town to stand in for his brother as Steve's best man and none too happy to be disturbed by an obviously unbalanced and slightly trashy woman waking him up as he's trying so desperately not to die from the cold from hell.

Before this humiliating and potentially catastrophic night can come to an end and either Janine or Derek can flee, the hotel is hit with a mysterious epidemic and the CDC quarantines the hotel guests. Janine and Derek are stuck with each other. Neither are at all happy about it. But while absence may make the heart grow fonder, familiarity doesn't always breed contempt. As Derek and Janine get to know each other, Janine starts to wonder if "best man" is more than just a wedding honor.

While the concept of the plot for About Last Night... is harmlessly cute and the narrative and dialogue are quick, light, and humorous, I had some problems with the characters in this one. Even taking the nature of the book into effect, I found Janine's consummate clumsiness and her propensity for correcting Derek's actions (you shouldn't rub your eyes, you shouldn't crack your knuckles, etc.) a bit off-putting instead of funny or quirky, and her reaction to the quarantine and the possible implications seemed a bit overblown.

Derek was a more realistic character, and he has some issues with his brother that added some depth to his personality. He wasn't exactly a charmer to Janine for most of the book, though, and while I could understand the physical attraction inherent in the situation, I didn't get a sense of deep personal connection between them. For this sort of light comedy romance to really work for me, I have to like the characters and they have to click, and I just couldn't warm up to either of them until very close to the end.

There were things I did enjoy about this book, though, and I didn't completely dislike the main characters. The hotel manager Manny was a true pleasure as one of the secondary characters, too. I wish he'd been more involved in the story. I also liked Janine's actions with Steve towards the end, and admired her actions in dealing with the responsibility for the lost ring (that will make sense when you read it).

Stephanie Bond writes light, fun stories and the few I've read I've enjoyed. This one just slightly missed the mark for me. 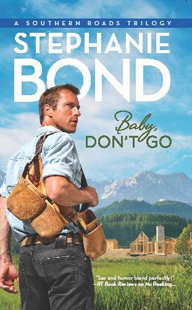 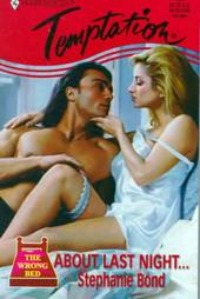 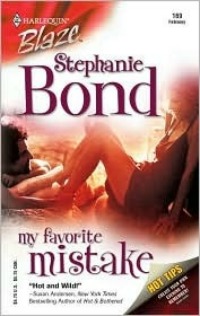 Return to top of About Last Night...