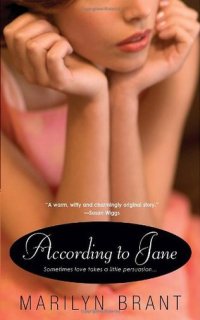 As a sophomore in high school, Ellie Barnett is tormented by Sam Blaine. He makes her life miserable with all his teasing and taunting. What makes it worse is she's crazy about him. She's known him since kindergarten but lately he just keeps prodding and poking at her, always goading her. It's driving her crazy. Then her English teacher passes out the book for the semester's reading assignment and as she picks up her copy of Pride and Prejudice, she hears a sound of derision. A scoff. Then words. In her head. Jane Austin, in fact, expressing dire warnings about Sam and general bits of wisdom about life, love, and propriety. And Ellie Barnett will never be the same again.

Having the ghost of a famous author rattling around in her head acting as confidant and best friend isn't a free ticket to fun and happiness, however, and as the years pass, no amount of advice and insight into human character helps Ellie with years of disappointment in relationships and what's looking more and more like ultimate failure in the romance department.

This quirky, odd book is difficult to classify. Technically, having a lead character who converses with the dead author of classic literature would start pushing it towards a paranormal...or denote insanity, but nothing in According To Jane would seem to indicate Ellie is suffering from a mental illness, and yet, the style of the writing and the plot lean more heavily towards contemporary woman's fiction. Maybe contemporary romance, though even that is more of a stretch for a couple of reasons that would be spoilers if I listed them here. Regardless of genre, Brant has put together a cute jaunt through the romantic psychosis of a woman whose biological clock started ticking when she was about sixteen. Since then, with Jane's help, she's navigated the unfriendly waters of love with an overly optimistic and fanciful hope for happily ever after with a modern prince charming. Needless to say, it hasn't been going well.

With a narrative that flows seamlessly through Ellie's past and present, transitioning randomly, and peppered with various heartbreaks and romantic tribulations, the story unfolds and is layered with a hopefulness and yearning for happiness that isn't dulled even during Ellie's darkest days. I have to give Brant credit for this imaginative, original book and the dedication and research put into Jane as a character. Her dialogue and her personality felt very authentic and was vital to the success of the story.

I do think the plot was a little limited and seemed one dimensional. While I understand that the span of time in the book covered years, the glimpses of various stages of Ellie's life were so focused on her yearning for true love and family that it seemed almost pathological in intensity and there was little else to define and enhance her character beyond that. It got a bit tiresome for me in a few places. I also found Jane's vehemence against Sam to be poorly supported by the explanation given. It seemed too much vitriol, especially later in the book. I also thought Jane's explanation came a little late and I would've figured Ellie would've asked Jane sooner why she was so unflinching in her abhorrence.

I loved Sam, though, and thought Brant did a really good job subtly defining him and showing his interests in the few scenes that he was in. My favorite parts of the book included him and Ellie and I wish there had been a few more - but that's not a complaint. It's me being greedy.

According To Jane is a quirky, cute book and other than those few issues, I thoroughly enjoyed it. I found the concept of Jane Austin as a cross between a guardian angel, sounding board, and best friend was intelligent and original and added an odd but definitely unique aspect to this read. I may have gotten a little tired of Ellie now and then, but overall I wanted her to have that happily ever after for which she so desperately yearned.

Return from According to Jane to Contemporary Romance Genre

Return from According to Jane to OGBDA Book Reviews Home