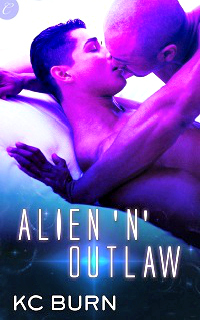 He fled his home world to avoid the marriage triad his father, the Ankylos Emporer, had arranged for him. R'kos had always known he was not like other Ankylos, but it wasn't until a recent ambassadorship that he realized how different he really is. Instead of his own kind, it is the scent of human males who stir his mate instinct. So R'kos returns to Elora Ki as soon as he can, intent on finally indulging his unlocked passions.

Occasional thief and trader Damien is on the run from the thugs of the drug lord he'd stolen from and he has to get off Elora Ki as soon as possible. Or, you know, sooner. Those drugs are too important to those who need it for him to fail. Just as he's about to be caught and likely killed, a robed figure comes to his rescue and offers him a chance of escape. All he has to do is trust a complete stranger.

Damien isn't any bigger on trust than he is on sharing space with the large, robed man. Until the cowl of the robe is pushed aside and Damien's lust is stirred. Suddenly trusting this alien who came to his rescue is worth reconsidering. Especially if R'kos will go with him as they flee.

With nicely rounded out moments of cuteness and flares of sizzling heat, Damien and Ricky's romance appealed to me on a lot of levels. It's not terribly long at about 129 pages, though there are enough plot elements to keep it from feeling overly abrupt or shallow. I was pleasantly surprised by how much goes on between the two main characters in the space allowed, and how the various external conflicts are nicely spread throughout the book.

None of those conflicts and plot elements had any particular depth or detail, but neither did I feel that they were being plowed through in a race to the finish line. I would have preferred one or two less elements, though, so the remaining plot threads could have been expanded and fleshed out more.

I thoroughly enjoyed both characters, and some of their early scenes in which they explore each other's different physiology were amusing and highly entertaining. Burn kept the heat between them at high levels, and their chemistry worked for me, as did the arc of their romance. At least, right up until the climax of the tale.

I'm not sure what it was about R'kos when he goes back to his home world, but his actions and choices seemed to contradict what I'd thought I knew about him both as a possessive alpha male and a thoughtful individual to that point. That left Damien in a vulnerable position and not surprisingly, he was confronted with some unpleasantness that I couldn't imagine Ricky, given everything that led up to it, allowing to happen.

My issues with that, and with the quick resolution at the end, tarnished the read just a little, but overall this was a perfectly enjoyable short novel/long novella that had moments both sizzling and fun. I wish I'd read the first installment in the series first, but not because this one needed that setup - it doesn't. It reads just fine as a standalone. I just think I would have enjoyed the characters and their story like I did this one. 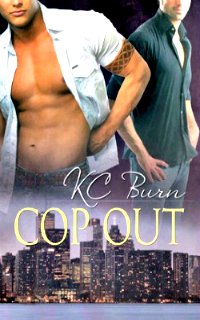 Return from Alien 'n' Outlaw to One Good Book Home