All He Ever Needed 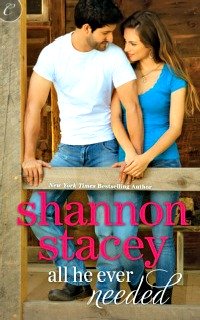 Disclosure:   An ARC of this book was provided to me by Carina Press via NetGalley.
This rating, review, and all included thoughts and comments are my own.

Demolitions expert Mitch Kowalski is a rolling stone, a rambling man through and through. That serves him well, as his company has a diverse and geographically wide-spread clientele. It fits his social life just fine, too, because Mitch is a good-time guy. He enjoys women, all sorts of women, but he's always upfront about the fact that he plays, never stays.

It's been three years since his last visit to hometown Whitford, Maine, but his baby brother broke his leg and can't manage the family lodge until he gets the cast off. Mitch has committed to six weeks of his time while Ryan heals. He's not back in town a day before he steps into the town's diner and meets the new-to-him owner, Paige Sullivan.

Suddenly six weeks in a town full of people who know every last one of his wildest antics growing up...and still gossip about them...doesn't seem so bad. Especially now that he knows exactly how he plans to spend his downtime, and with whom.

Growing up with a weak, needy, wanderlust mother who spends her life chasing after one man or another molded Paige into the independent woman that she is. For two years she's been living her dream, putting down roots, owning her own business, her own tiny little home, dependent on no man for her happiness. As far as Paige is concerned, men are nice enough to look at, but they offer nothing that she...and a few good batteries...can't take care of herself.

Then again, some men are nicer to look at than others, and gorgeous Mitch Kowalski definitely reminds Paige how easy it would be to submit to a man's hard-pressed seduction. And when no-strings Mitch locks horns with no-man Paige, the sparks that flare up between them are hot enough to burn both of their tightly-held convictions right to the ground.

There are several things I liked about Mitch and Paige's book, not the least of which was the fact that it didn't read like the fourth book in a series. I read the first book over a year ago but missed the previous two, and I didn't know how that would affect the read. It wasn't a problem at all.

Stacey set up the characters and the town with a deft hand, painting them with personality and vibrant color, capturing the small-town charm and the peccadilloes of the residents in a way that felt charming and fresh and new. This could very well have been a series debut.

Mitch and Paige were a lot of fun together. On their own, Paige appealed to me a little more than Mitch did, but I didn't dislike him. He just seemed a bit shallow, more driven by self-interest, especially initially, than I prefer in a main romantic lead character. Paige, on the other hand, charmed me from start to finish. I loved her independence and her determination to make her way and follow her dreams on her own merits. No man needed.

Their road to Happily Ever After is a fairly well-traveled one. It isn't the most original premise. The plot is fairly predictable. He's a total commitment-phobe who never leaves a woman unsatisfied, but always leaves. She's the determined firecracker, the only one who refuses to cave to his many and varied charms. Of course he changes her mind, of course she changes his.

Though there aren't many surprises, neither are there a bunch of big misunderstandings, unnecessary angst, or any of the other trite, ubiquitous relationship conflicts that drive me a little batty.

Still, had their relationship been the only thing going on in the book, I probably would have gotten a little bored. Stacey proved herself more wily than that, though. There are several secondary and ancillary plot threads that pop up throughout the narrative, and secondary characters play an important role in adding diversity and depth to both the cast and the tale. There was also a bit of groundwork laid, I believe, for Mitch's two remaining single brothers and their stories.

This ended up being a really fun contemporary romance. Sweet in places, quirky and charming in others, a little funny here and there, a lot sexy here and there. With the diversity in the plot threads, there are even elements that lean in the chick lit direction every now and then. I enjoyed it.

Stacey has appealing literary voice, and she's created a lovable world that makes me want to pop open an online map so I can figure out how to get to Whitford for a short vacation. The characters feel like old friends. I may have missed the second and third books in this charming series, but I have every plan to continue on from here.

Return from All He Ever Needed to Contemporary Romance

Return from All He Ever Needed to One Good Book Home