All Tied Up is a Bit Knotted 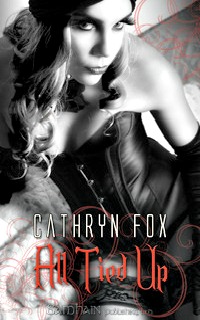 Pamina, Goddess of Passion and Everything Enchanted is summoned by the pledge of three friends determined to swear off men. With a touch of magic and a bite of an apple, she hires the three women who share a design company to renovate an Old Victorian and turn it into a sexual retreat, with each friend taking a room to decorate according to their deepest fantasies. Lindsay Bell, the bawdy bad girl of the trio, is intent on a BDSM room that'll tickle her fancy. What she hadn't planned on was gorgeous handyman Brad Caldwell to help her. Soon all Lindsay can think of is trying out - with Brad - all the new toys for the room and getting Brad to take her where she's always wanted to go...the pledge to swear off men be damned.

Unfortunately, I had some problems with this novella on just about every front. Beyond the set up of the concept for the plot, there just wasn't much attention given to plot or character development, and the relationship between Brad and Lindsay suffered as a result. Seeming perfunctory and shallow, neither lends to the sort of tone that would allow for a seductive BDSM scene...but that doesn't even really become an issue because the 'play' in this role play was exceedingly tame. Not that I would have wanted hard core, I didn't. But I just couldn't suspend my disbelief...and a bit of distaste...in part because the development of the characters and relationship were so sparse, and in part because I just didn't buy the idea that Lindsay would in just a few days time share with Brad a kink (a relatively harmless kink, really) that she'd never mentioned to any of her other boyfriends before. There are just too many problems with that all around.

There was an attempt to add some depth to Brad's character, and much of that attempt succeeded. I liked his issues with wanting to go to med school and the problems he's had with women over his blue collar job. He and the not-quite-a-cat were my two favorite parts of this novella. I wish there had been more time spent on and with both of them and less on Lindsay, who's unrelenting focus on sex and not much else turned me off.

Return from All Tied Up to Paranormal Romance Genre

Return from All Tied Up to OGBDA Book Reviews Home