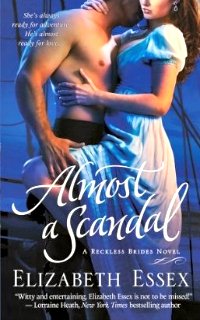 Disclosure:   An ARC of this book was provided to me by St. Martin's Press via NetGalley.

When her brother forsakes family tradition and personal honor, disappearing the day he is supposed to become a member of His Majesty's Royal Navy and board the ship Audacious, Sally Kent knows what she has to do to avoid the family scandal and disgrace. She disguises her gender, dons the midshipmen's uniform, and heads to the docks to take her brother's place.

It's just her dubious luck that she's met by David St. Vincent Colyear, family friend and current lieutenant aboard Audacious. The man has filled out in the six years since she last saw him, and though curt and dour, something about him sets Sally's pace racing. Not necessarily the reaction she wants for a man she is going to have to work to impress and yet try to avoid lest he discover her true identity.

I seem to keep stumbling over the woman-passing-as-a-boy theme in historical romance of late. I've even read a book in the last year in which the heroine went to sea with the Navy as Sally did here. I don't mind the theme, really, but the seeming prevalence is starting to wear on me.

Fortunately, this story was one of the better ones I've read, so it stood out in a crowd. Essex didn't draw out Sally's well-intentioned if ill-advised deception for so long that it started to annoy, and I genuinely enjoyed her aptitude in the midshipman's role. She really was born ahead of her time, perfectly suited to a life in what was solely a man's world. I loved her plucky, competent, tomboyish, and fiercely independent heart.

And Col was a perfect complement to her. Handsome, strong, loyal, and determined, he also trusted Sally's skill and relied on her to do her job even after he finds out she's a woman. It worked for me. Together they worked for me.

I have to admit, though, as much as I enjoyed the romance between Sally and Col, I was way out of my depth with the naval terminology. There was a lot of it, and without explanation or definition, I had a very hard time with much of the details of naval life and the action on board the ship. It's probably very historical accurate and nautically sound, but it was too much for me.

Late in the book there were a couple of developments that I wasn't fond of, and Sally seemed to fade out of the narrative a bit. The impetus of the plot lost a bit of momentum at that point. And I didn't understand the introduction of Grace's character at all. Her presence and the subsequent scenese with Sally made me question my understanding of Sally as a character. It was a little jarring.

Overall, though, this was a very nice series debut from a new-to-me author. Historical romance fans with an appreciation of the women-disguised-as-a boy theme should definitely mark this as a title to try. Even if you're more ambivalent about theme, this was a solid story with a sweeping romance with great characters and can appeal to a wide audience. I liked it very much.

Return from Almost a Scandal to Historical Romance

Return from Almost a Scandal to One Good Book Home