Along Came a Spider 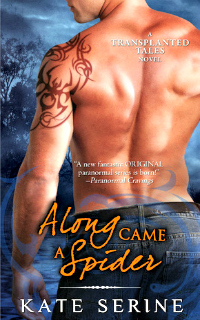 Disclosure:   An ARC of this book was provided to me by Kensington Books via NetGalley.

Trish Muffett, investigator for the Fairytale Management Authority, just finished working a brutal crime scene when she's attacked by the two vampires responsible for the victim's death. For a Tale like Trish, vampires aren't unusual, but the two who attack her in the alley feel different than normal Tale vamps. And she has no idea why.

It's not like she has time to figure it out, either, what with trying not to die and all. Fortunately for Trish, not dying gets a lot easier when Chicago's very own vigilante, The Spider, comes to her rescue.

She is stunned when she recognizes the Tale to whom she now owes her life. The Spider is none other than Nicky "Little Boy" Blue, a man who left Chicago two years ago to track down Vlad Dracula, the Tale responsible for his wife Juliet's death. Oh, yeah, and he's the only man Trish Muffett has ever loved. Awkward!

It's even more awkward when Trish is attacked again, this time in her own home by an obviously pissed off poltergeist, and it's Nicky Blue who once again saves the day - and her sanity - when he shows up in her living room. Wait...Nicky Blue broke into her apartment. When he thought she was sleeping. Uh...yeah, someone's got some serious 'splaining to do.

Teaming up when they discover that the new vamps are Dracula's handiwork, Trish and Nicky race to catch the literary fiend. Whatever his master plan, Vlad is turning Ordinaries and they're killing Tales. He's got to be stopped. Unfortunately, their investigation has them practically tripping over agents from the Agency, the Ordinaries' elite Men in Black squad.

As tensions between the Agency and the FMA heat up and unrest grows in the Tale community, Trish and Nicky have to find the one monster at the center of it all and close his book for good. Unless he ends them first.

My feelings are completely conflicted about this book. I love the world SeRine created with this series, and though I didn't read the second book, I mostly enjoyed the first in the series, Red. This one, despite being an overall better story with a more engaging and complex external conflict, had elements that bothered me a lot while I was reading. And they were pretty important elements, too.

This is one of those books - and series - that walks the line between paranormal romance and urban fantasy. It's a hard line to tread and I've read few that could pull off both aspects with equal aplomb. This one didn't. Not for me, anyway. The first person point-of-view narrative was my first problem. It just isn't a favorite of mine in conjunction with a romance arc. And that romance arc was far more prominent in this story than it was in the first book.

Normally that would be a good thing, but between the POV and Nicky, who I didn't like as a character nearly as much as I did Nate in Red, that put the final kibosh on the appeal of the romance in general.

I don't know what it was about Nicky, really... I liked him just fine as an ancillary character in Red. As a heavily involved secondary character in this book, he began to wear on me by the halfway point. Everything from his name, which struck me as too-cutesy after being mentioned as many times as one would expect for his level of story involvement, to his very vaguely defined criminal enterprise (I would have liked a lot more explanation about just how criminal that enterprise was), to his odd relationship with his dead wife Juliet and his sudden spurt of emotional connection to Trish, just started to rub me the wrong way and never quite smoothed out for me.

And if he called Trish "doll" one more time, I was going to scream. Suffering through his dialogue was like being dropped into a bad prohibition-era mobster flick. Not my thing.

I liked Trish a lot more than I did Nicky. In fact, I liked her a lot period. She was a little inconsistent at times, and she wavered a bit between take-no-prisoners badass chick to squealy damsel-in-distress, but overall, I found her to be a very palatable heroine. Much more so than Red in the first book. She definitely wasn't the stereotypical, emotional-commitment-issue-having, gun-toting, sarcastic, ass-kicking heroine, a fact that I was most grateful about, but she managed to mostly hold her own when she wasn't screaming or fleeing danger in terror.

Mostly because of her appeal and despite my issues with Nicky, I was very much engaged in the first half of the book. The story started strong and the plot had a lot going on from the beginning. The two main threads of external conflict, the growing issue with the Agency douche bags and the search for Dracula, provided a nice, meaty bit of drama for the characters. Much danger and mystery surrounded it all.

I was about halfway in when I started to feel like the storylines got a little lost. There weren't a lot of answers to be had at that point, just growing badness with the Agency and with Dracula, and Trish and Nicky seemed to be spinning their wheels a little in both areas. The book seemed to lose a lot of its momentum at that point, and I started growing more and more frustrated by some things, most notably the Tales' lack of action against the Agency for some pretty heinous actions.

That was also about the time the romance went completely off the rails for me. Given all the backstory with Juliet and some pretty startling revelations about her relationship with Nicky around the time of her death (which I didn't like for several reasons), I did not expect, nor did I enjoy, the seemingly abrupt about-face in Nicky's feelings for Trish. I just couldn't buy it. Not without a more detailed foundation and or some emotional resolution concerning his dead wife.

And the problems I was having with both the romance and the external conflicts plagued me throughout that whole third quarter of the book. It got so bad at one point that I almost put the book down. Nicky gives Trish a gun as they get ready to walk into a dangerous situation, then tells her to expect the dangerous people they're going to meet to take it from her. When Trish asked a very valid, "well then why give it to me in the first place?" Nicky's response was something along the lines of him wanting to make an impression.

I just stared at that passage for a while feeling not just a little gobsmacked. Because of course, when you're walking into a very dangerous situation to meet very dangerous people, bringing a gun that you know will be taken from you is an excellent idea. Obviously, these people need to have more weaponry at their disposal to end you should your presence miff them.

I was so disgusted at that point that it didn't matter what happened in the scene they walked into. I was already predisposed to hating it. And that's the problem that I had with that whole middle part of the book.

It got better, though. In fact, it got a hell of a lot better. When the pieces (finally) started to fall together and the answers started coming, the external conflict picked up speed and intensity as the climax approached. I loved the last twenty percent of the book. Action packed, emotional, dangerous, even a little tragic in very surprising ways, the end of the book was definitely a very high point of the read for me.

Therein lies the conflict. There were parts of this book I liked, parts I loved, parts I didn't like, and parts I hated. That definitely makes rating it difficult.

I love SeRine's world of Transplanted Tales. I do. It's unique and intriguing and the characters are diverse and fascinating. I even love SeRine's authorial voice, which resonates with such clarity in the narrative. Unfortunately, I don't always like what that voice is saying to me, and it leaves me feeling very torn about the book and the series both. 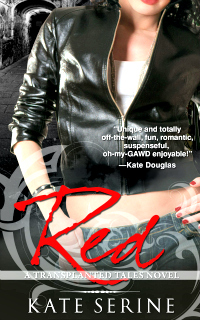 Return from Along Came a Spider to Fantasy Romance

Return from Along Came a Spider to One Good Book Home