As It Has Been, So Does It End 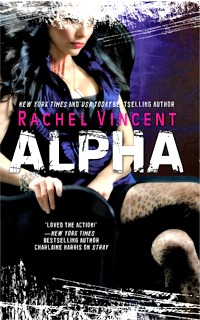 After all of the struggles, the preparations, the politics, the weeks of tragedy and torment, the grievous loss of family and friends, suffering the slings and arrows of the megalomaniacal and Machiavellian Calvin Malone and his cadre of thugs and rubes...and it all comes down to this for Faythe Sanders, the south-central Pride, and its allies: war.

We knew it was coming. For five out of the six books, at least, we knew it was coming. While waiting for the inevitable, Rachel Vincent has charmed with her smooth writing style, believable characters, and interesting world building and mythos. Admittedly, some books in the series were more charming than others, but without a doubt, Vincent knows how to shove a clawed hand into a readers heart and squeeze every drop of emotion out of them while she weaves a story about a character who I think all would admit, at least, is fallible, and the family, Pride, lovers, and friends who love her. And after it all, with the final page turned and the saga ended, I feel compelled to say this - despite my grievances with this book and the last, and to a lesser extent the series as a whole, I credit Vincent for making me care about these people, feel loss and joy with them. Cry and smile. Okay, I admit it, one or two times there may even have been a sob. Her writing style is flawless, and she's extremely good at enhancing reader emotion through story. It's a gift that many writers don't quite manage.

But for me, the bloom is only part of the rose, and while with Alpha we get that war we've all known was coming, I found the getting supremely disappointing, and the book as a whole (unsurprisingly) predictable. And I was afraid, after Shift (The Shifters, Book 5), that I would.

And is it just me, or does the same sort of thing happen in every book? Faythe gets kidnapped. Her value as a tabby is shoved down our throats. Her all-important (but by this point, overwritten) struggle to maintain her value as an enforcer is called into question. She's assaulted and bedraggled. She overcomes some sort of stupidity of her own making. She pushes away/denies/betrays Marc. She looks back and pats herself on the back for her "growth." Lather. Rinse. Repeat.

Okay, I'll admit, I was way off. Faythe wasn't kidnapped. She was arrested. Like she was in the third book, if memory serves. The rest could be a Shifters series "Must Contain" checklist. And Alpha has all the boxes checked. The repetitive formula for this series isn't, however, its most tragic flaw.

I have rarely detested a character more, or been more disappointed in the utter lack of development and maturity. She is everything - absolutely everything - I hate in a character. And unlike other series, where I may have started out disliking the lead and grown to like them over the arc of the series, I actually went from disliking her to utterly loathing her by the end. She got worse through the series, not better, as the stakes were raised and she proved again and again to be completely worthless to her Pride and the people she's supposed to love more than she loves herself. Without someone pointing out the impact her actions have on others, she doesn't even notice anyone or anything else beyond herself. And I'm sorry, but being self involved, petulant, immature, entitled, and whiny enough to make a werecat's ears bleed doesn't make for an appealing heroine. Sure, Faythe always feels so wretched/regretful/guilty/[insert adjective here] for the mistakes she makes and the damage they inflict, but she keeps frickin' making them over and over and over again. Just a little character growth would've been nice. A smidge. Anything. Sadly, none was forthcoming.

Then there's the poorly conceived, against character, overwritten, and painfully melodramatic love triangle between Jace, Faythe, and Marc. I'm not going to add spoilers here. Let's just say I wasn't a fan, to put it lightly. I expressed my feelings on that in the previous book's review and those feelings haven't changed. I will say this, though...from the moment that "triangle" developed, I had an idea on how it was going to end. And it ended exactly - absolutely exactly in every aspect - the way I guessed it would two books ago.

And for all the buildup to the impending conflict, and all the time and energy put into the six book series, sticking it out to the end to get to the war...it ended, so to speak, with more of a whimper than a bang. I am determined not to give away spoilers about the ending, but just want to say I wasn't satisfied with it. There was way too much unresolved and not enough justice to balance out the scope of the events in the series for my tastes. And for all the loss, tragedy, betrayal, and angst over the six books, there just wasn't enough realized gain. I have no idea if Vincent has any plans to stay with this world she's created and begin another series set sometime after the events of this one, but if not...if nothing achieved by the conclusion of this book is ever seen come to fruition, then ultimately, this book, and the whole of the Shifters series, ends up being nothing more than a prelude to a kiss.