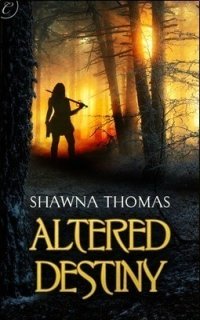 She's heard it all before. The rumors. The fear-driven warnings. And each time they're stirred, tavern owner Selia's business takes a hit. People don't venture out when they think the Svistra are coming. The monstrous Svistra; a race of blood-drinking, murderous, ravening beasts. They are on the move from their lands in the north, intent on slaughtering everything in their wake.

They are the boogeymen her people fear.

That doesn't mean she believes the Svistra are actually close, though. She's heard it all before...but...admittedly, not like this time, her source a company of the King's soldiers who stop at her tavern on their way to track a band of Svistra allegedly attacking some of the northernmost villages. Then a week passes and Selia figures the new rumors are just as baseless as the rest. Until the night she comes back from checking her traps and finds three thieves beating a man on the path to her tavern. After dispatching them and going to the prone body on the ground, Selia is stunned to realize the victim isn't human.

But his very presence, the fact he hadn't fought back against the thieves when Svistra were known to be powerful enough to handle ten men in battle, and his broken, polite, raspy-whispered request for water... None of that tracks with the horror stories she's heard. His behavior doesn't make sense if everything she thought she knew about Svistra was true. That contradiction makes it impossible to end his life as easily as she ended those of the three brigands. She can't trust him, but Selia can't kill him, either.

With the help of Oren, the man she considers both her brother and her responsibility, they nurse the Svistra back to health. His name is Jaden. Saving him, though, will have wider ramifications than Selia could ever imagine. In fact, sparing his life, then helping him heal, will alter the course of history for both their races...and it will forever alter Selia's heart.

Complex, dynamic, and powerful, this fantasy romance by Thomas hit every one of my happy-reader buttons. The world-building was a little on the light side, without a whole lot of explanation for some of the things that exist in that world beyond the barest of understandings of the human kingdoms and the history of the Svistra, but the ensemble cast of main and secondary characters were richly defined and vividly drawn and their multi-faceted story was engrossing.

The Svistra's backstory and their dubious nature were at turns fascinating and heartbreaking...and disturbingly vicious. I loved that Thomas didn't go the easy route and paint them as the mindless villains in the piece, but I liked that they certainly weren't sympathetic fluffy bunnies of love and peace, either. Not even Jaden, really, the most human-friendly of the lot of them. Their diet and abilities couldn't help but remind me of vampires, but other elements of their nature kept that from being too much a problem for me. And I think it would have been a problem for me in this sort of fantasy novel. Instead I was able to enjoy their place in the world and understand their motivations...if some of their actions were a bit on the coldly ruthless side.

The plot threads of the increasing hostilities between humans and Svistra, alongside those of the power-mad actions of Jaden's brother, and Selia's and Jaden's struggle to survive, were more than enough to provide a layered and intricate plot that grabbed and held my attention at every turn. That being said, it was my utter enchantment with the characters that pushed my enjoyment of this book to the highest levels.

I adored Selia for her independence, survivalist intelligence, and strength, and appreciated her dedication and loyalty to those causes and people she believes in. She is a strong and self-sufficient lead character with a sense of honor and decency that mark all my favorite fictional heroines. Jaden delighted me for his unwavering belief in his ideals and his desire to save his people, his protectiveness and dedication to Selia, and his ability to rise above his nature to be what his people deserved to be long before they had the means to be it. The romance between Jaden and Selia is subtly written, probably more so than strict fans of romance will likely enjoy, and it's not a primary plotline in the story, but it is inexorably woven into every story element and raging external conflict and is the driving force in many of the actions and attitudes of both characters. It was enough for my tastes, and I loved it. I loved even more how their feelings for each other had such an impact on the surrounding story.

This book was a nearly flawless reading experience. Through the high points and lows, through the risks, dangers, and threats, through the revealed truths and uncovered deceits, through heart-breaking loss and clench-fisted triumphs, this story wound around my heart and sunk in deep. It drew me in and forced me to feel the full sweep of emotional entanglement for the characters as it was entertaining and impressing me with its well-written plot. For all the books I read in all the genres in which I read them, I don't actually find a lot of books that I consider truly five star reads. For me, this is one of them.

Wow! I am so glad you loved the book! Thank you so much for taking time to read and review it!

Thank YOU, Shawna, for writing it. It made me a very, very happy reader.