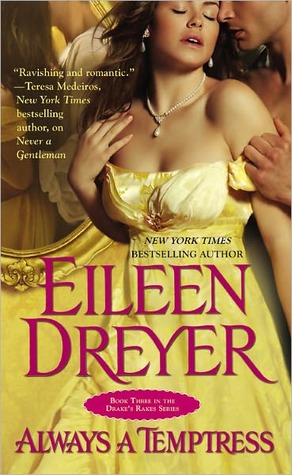 Her reputation among members of the ton is scandalous, her admirers as legion as those tight-lipped matrons who decry her shamelessness. The always fashionable and easily bored Dowager Duchess Kate Murphy revels in her reputation. Inflames it whenever she can. And never lets a soul see the truth behind the gay smile and quick wit.

Sir Harry Lidge is furious and fed up. Still smarting from Kate's betrayal all those years ago, tormented by the horrors endured on the battlefield, Harry is quick to jump at the rumors of Kate's treasonous activities. He does what any one of Drake's Rakes would do. Kidnaps and imprisons Her Grace, intent on getting answers and finding the verse she's said to have. A verse that is the key to a beautiful, treasonous woman's sedition.

Harry should have known his plans wouldn't go quite as he'd thought. Nothing in his life ever has when even briefly touched by the Duchess' hand. He didn't expect things to go quite as awry as they do, though, and he certainly didn't expect to be slapped in the face with two startling facts that raise all sorts of uncomfortable questions. Someone is trying very hard to kill the Duchess...and even more disturbing, she would seem to rather they finish the job than be stuck in a dark, enclosed room - even when placed there for her own safety.

Suddenly, what Harry thought he knew of the spoiled, salacious, ruthless Duchess Kate Murphy and what he sees with his own eyes are two very different things. And he hasn't the first clue which to trust.

I'm getting a little frustrated at feeling like the last girl at the party with all these in-progress series I'm stumbling into lately. Especially when they have a major series plot arc that wends its way through each book, or, like the Drake's Rakes series, seem to have both an overlapping or concurrent timeline with the other books and a major series plot arc. That definitely added a bit of confusion and made it difficult to really appreciate the external conflict of the plot. I wasn't always clear, especially in the beginning and towards the end, what was going on or who it was going on against.

Fortunately, that ended up being a minor complaint when held up against how much I loved the full and fabulous set of characters of this book and the romance plotline. Kate was, frankly, one of the most engaging and vibrant characters I've read in the genre lately. Her past is brutally tragic, horrifying, and bitterly painful, the manner in which she's learned not only to cope but to triumph in its aftermath is fabulous. I couldn't help but utterly and completely respect and adore her. She did far more than what she had to do to keep appearances, even setting herself up for criticism as she kept herself safe and saved others, all in a time when she had no one to turn to for real assistance and even noble widows had limited options. I admired her rather a lot.

Harry was a prat. But hey, he was a believable prat. A stubborn, distrustful, quick-to-judge git. Not that his actions of the past were a surprise. Just a disappointment. But then, first impressions aren't everything, and I loved how he dealt with the major paradigm shift when he realized the scope of his errors and misconceptions. He did a very satisfying turn-around in a very realistic fashion, and I was finally able to appreciate the character as a man, not just the bane of Kate's existence and an unfeeling ass.

Together, he and Kate shot sparks off each other even before the past was cleared up, and once the truth started coming out, the sparks turned into something warmer, deeper, and eventually hotter. They were tentative allies trying to make up for long-dead mistakes, unable to deny the passion they have always had for each other.

I was so very grateful that the truth was revealed relatively quickly in the narrative, that the storyline wasn't mired down by the angst from lies and secrets and miscommunications. It gave Harry and Kate time to heal from the past as they cautiously tiptoed towards the future. And I have to give credit for the way Kate's wounds and fears were dealt with. Harry, for all that he started out a git, became a patient and gentle hand with Kate. He was perfect with her and for her.

Their romance arc in the book was really all I could focus on as far as story goes, given my lack of experience with the previous books, but it was enough to provide a thoroughly satisfying read. Combined with a wealth of vibrant and unique secondary characters - rabble-rousing miscreants and adorable for it - and the complex and painful past of both lead characters, the path of their romance more than made up for my lack connection to the surrounding external conflicts in the book. It was more than enough to secure my enjoyment in the read.

This is my first experience with a book by Eileen Dreyer. The authencity and realism in the setting, the fabulously colorful characters, and a narrative lush with artistry in the development and evolution of plot guarantee that it will not be my last. It's becoming quite clear to me that I've missed out on some fantastic storytelling by letting historical romance fall out of my favor for the last several years. Now that I'm getting back into reading it, it's been quite a fun ride, highlighted by excellent stories such as this.

Return from Always a Temptress to Historical Romance Genre

Return from Always a Temptress to OGBDA Book Reviews Home