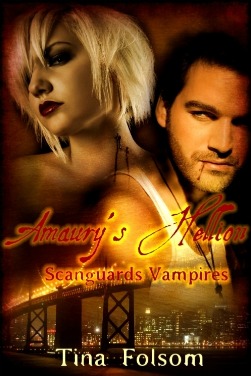 Cursed to be forever battered by the encroaching emotions of every living being surrounding him while love is forever denied, forced to seek the solace of silence in the release of sex, Amaury LeSang has spent hundreds of years tormented by the pain of a horrendous mistake he made. He hides the pain and loneliness from his friends and coworkers at the vampire-owned security company, Scanguards, and suffers in silence...until the night he is stalked by a hunter who knows what he is, a hunter who is determined to make him pay the ultimate price for his life of blood.

Nina Martens didn't know much about her brother's death, but she knows who to blame. She'd found the notes her brother had left, scribblings that told of the existence of monsters, and where to find them. Carefully staking out the men - the vampires - who run Scanguards leads her to Amaury LeSang, and she follows him one night, intent on ambushing him and getting a little payback for her baby brother. She wasn't expecting him to pick up her tail, to turn the tables on her...and she sure wasn't expecting him to kiss her instead of kill her.

She was so shocked by her body's traitorous response to that kiss that she dropped her stake and took off as soon as she slipped his grasp. He was so bemused by the stake that it wasn't until Nina was long gone that he realized he hadn't once heard her emotions. And suddenly, the woman who quite obviously wants him dead is the first glimpse of peace he's had in hundreds of years.

This second book in the Scanguards Vampires series was a bit of a disappointment for me after the unique series opener, Samson's Lovely Mortal. Lacking the originality and the amusing twists, Amaury's Hellion seemed more generic and recycled in both plot and character. That's not to say it was bad, per se, but it wasn't what I was hoping for after the promise of the series debut.

Amaury's character was the largest let down. When introduced in the first book, he seemed dark and tortured with an edge of sexual cruelty, but those character traits seemed homogenized here, and he quickly became more a fluffy romance guy (with fangs) once he and Nina hooked up. And it seems that every major PNR series has to have that one vampire (or demon or whatever) who is doomed to have daily meaningless sex through the ages as punishment for some past sin. Just off the top of my head I can think of two: the Black Dagger Brotherhood series went that route with Rhage and Lords of the Underworld has Paris, keeper of Promiscuity. Nothing new was added here to offer Amaury's curse its own twist. I loved the idea of Samson seeing a shrink for erectile dysfunction in the first book (that's still hilarious to me), and there just wasn't anything to compare here. I just kept wondering why, if Amaury was so tortured by his curse, he didn't live out in the country where the emotions of others couldn't reach him.

Nina was a pretty typical, and unfortunately forgettable, heroine. I've never been a big fan of characters who think that an awareness of vampires instantly turns them into SuperBuffies, faster than a speeding splinter and able to leap tall, dark, and fangy with a single bound. It's a characterization cliche that has been heavily overplayed in books, and didn't work for me any better here. And of course Nina is the only one in all the world who can quiet Amaury's emotion reading, because she's the one with a grudge against vampires who is stalking Amaury based on the unexplained scribblings of her dead brother. I wanted to buy it, but I just didn't.

They did have some chemistry together, though, despite my issues with their characters as individuals, and while I didn't think Amaury was the character that we'd been introduced to in the previous book, I certainly didn't dislike him. Nina got on my nerves a little, yes, but Amaury wasn't a bad guy. I just wish he'd fulfilled the promise that he'd had.

The book also had some of the same sort of grammatical and editing issues that the first book had, and the narrative seemed to lack polish because of it. There were some very odd moments in the dialogue between Amaury and Nina that seemed stilted and unnatural. It gave the book that same lack of sophistication that I noticed in Samson's Lovely Mortal, but it didn't detract too much from the overall reading experience.

This wasn't a bad book, really, and for fans who like their PNR with a lot of yummy sex, I can imagine this will be a big hit. Unfortunately, it just didn't quite offer me all that I'd hoped it would, and the issues with the characters and plot kept me from appreciating it as much as I did the first book. I still have promise for the series, though, and intend to follow up with Gabriel's Mate (Scanguards Vampires #3) soon. 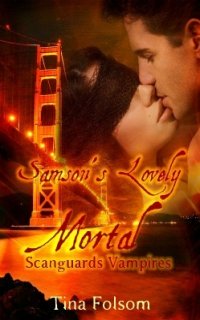