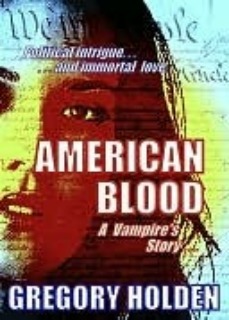 She was the first - the origin. Two thousand years ago she was forced into a leper colony and worked as a slave for the Romans, sent deep into caves to excavate two different rocks that the Empire used for color pigmentation. Her leprosy was highly advanced when she got lost deep in the maze of caves. It was highly advanced until she stumbled into a glowing, warm pool of water and found the stone. The water saved her life, the stone changed it forever. But it made everyone else who came close to it ill with a coughing sickness. It didn't kill them. She did that, when the thirst for blood grew so intense she couldn't ignore it. She's been the apex of apex predators ever since.

The vampire - the first vampire - is now being hunted by an entity with even fewer scruples and less conscience than the highly evolved predator. An entity known for throwing cannon fodder at a problem until sheer numbers overwhelm the enemy, regardless of death toll. An entity coldly focused on its own agenda and utterly unsympathetic to ideals. The American government.

Seven years after the twin towers fell, members of the administration are desperate to take out the highest terrorist threat - mostly for political reasons, to salvage two terms beleaguered by scandal and economic disaster. Add some pork to a bill or two and you have enough money to capture, study, and control the single most efficient and cold stone killer on the planet. But scientists aren't politicians and Calida isn't just a killer, a fact that microbiologist Dr. Ryan becomes aware of when studying her remarkable physiology. Something about Calida draws him in beyond his fascination with her on a genetic level.

Before he can get all the answers to her with his science, Calida is taken out of the lab and used as a weapon by a force of evil that rivals dictators and terrorists. Being forced to kill doesn't sit well on Calida, but she's not given much in the way of choice. Ryan is sent with her to take down the most wanted terrorist on the planet. If they fail, they're expendable...and if they succeed, they're expendable. And while Calida may be a predator, she's not the monster of this story. Not even close.

By no means a perfect story, American Blood: A Vampire's Story suffers from some technical problems. There are grammatical errors and misused words (i.e. 'our' instead of 'are'), and an overall lack of the sort of polish that is found in more mass market publications. There are also story issues, like the beginning which seemed abrupt and choppy, a narrative that had some awkward transitions and felt a bit clunky on and off throughout the book, dialogue that lacked fluidity and a natural cadence in places, and more than one plot point that stretched the boundaries of believability (a microbiologist civilian with little to no field experience sent into Afghanistan on a vital military mission? Really??) and/or came off way too heavy-handed and overdone (subtly is often more chilling when you're defining villainy). I would have loved to have seen what a thorough editor could have done with it.

Yet, while all that may be true, there are a lot of things about this book that totally worked for me and got me really excited, not the least of which is the concept of the story itself. One of the most impressive things about this book is the simple fact that I completely buy not only the possibility but the probability that something like the events described absolutely could and would happen. Totally.

It actually reminded me quite a lot of Jurassic Park in that way - a story that had some flaws and sure, dealt with some woo-woo science, but the motivations of the characters and the plausibility of the sometimes twisted path of scientific 'progress' so enthusiastically (if unwisely) pursued were spot on. And that's the same feeling I got from American Blood: A Vampire's Story. If the US government could get its hands on the first vampire, poke, prod, and do everything but dissect it before unleashing it on the country's unsuspecting enemies?? Hell yeah, I see that happening. Weaponizing an apex predator? Yup. Totally believable. Maybe I'm jaded, maybe I'm cynical, and even though I love my country...I'm not even a little naive in my understanding that tyranny is not relegated to foreign soil. And that's where the majority of the strength of this book lies.

Admittedly, the characters are a bit two-dimensional and slightly stereotypical...and other than in Calida's case, there's not a lot of depth in their personalities or backstory. The development of the romantic relationship between Calida and Ryan is a bit perfunctory and stuffed into an odd setting, but their scenes and interactions are solid from the beginning, and I really enjoyed their final scene - a lot. I liked Ryan as a character. Idealist, maybe, but an all around uncomplicated good guy with a pretty clear moral compass. Sort of a geek socially, but pretty confident of his abilities and his science. And there's a lot of science - pretty good science, too. I don't have an advanced degree in microbiology...or geology...or anthropology, but I wasn't so overwhelmed with the science stuff that it made my brain hurt, and I really liked the angle for explaining Calida's abilities and limitations.

Overall, and despite issues, this is a story that resonated with inherent truisms and used a fictional vehicle to shine a slim beam into the pitch black depths of political aspiration. The book and the characters both will stick with me. I'd love to see a sequel, as I think the groundwork supports it, and I would've appreciated a bit more...comprehensive end for a conclusion. Another sequel might offer that. I'll keep hoping.

Return to Top of American Blood: A Vampire's Story