And Call Me in the Morning 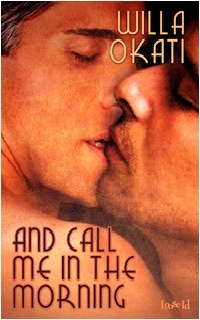 And Call Me In the Morning is the story of Eli and Zane, best friends, doctors at the same hospital, and joined at the hip to such a degree that their best friends tease them unmercifully about their "real" relationship. But Eli is straight. And so is Zach. Or they always have been, until the relentless pressure from friends with their best interests at heart push Zane into doing something rash...something crazy...and something he's dreamt of doing for a year - kissing his best friend. And that one kiss sparks something in Eli that he can't quench. Soon quenching it is the last thing on his mind. Eli and Zane learn that no matter how far along in life they are (43 and 41 respectively), or how defined they've been by sexual rolls, it's never too late to find love and live life as it was meant to be lead. With love, hope, and fun.

I loved the story of Eli and Zane. It was a sweet, tender journey towards discovering love in a most unlikely place and while it may not have been the most original story, nor broke any new m/m romance-genre grounds, it was a definite feel-good story that made me smile. The plot was well paced and steady, with just enough conflict to keep it interesting (though a bit predictable) without being melodramatic...and I love gay-for-you themed stories. They don't always work, but with these two characters, it really did.

All that being said, I had some problems with a couple of things in And Call Me in the Morning. I don't know if it's Willa Okati's writing style or if I'm just out of the loop, but the narrative - told in a loose third person from Eli's perspective - was sometimes a struggle to understand. As too the dialogue between the characters. I'm not sure why, exactly, but it was almost like there were times when things weren't said in complete sentences (particularly the dialogue), or described with a complete concept, and the narrative was difficult to follow because of it. Plus there was a lot of very internal-type communication between Eli and Zane. More said with looks and action than dialogue. That can be an effective tool, but it was sometimes a little too vague to sufficiently describe what was happening in the scene. Character development was also a problem for me. I thought Zane was probably the most fleshed out of the characters, the most three-dimensional, but as the story was slanted from Eli's perspective, I felt his development should have been more fully realized. Secondary characters were two dimensional - with maybe the exception of Taye, but they didn't have much of an impact on the story so I was pretty forgiving of that.

Overall, I liked And Call Me in the Morning, but the difficulties I had discerning what was going on or what Eli and Zane were talking about interrupted the flow of the story for me, and combined with the sweet but unoriginal plot and predictable conflict, I can't rate it higher than three stars. I've read other books by Willa Okati and while I think this one was by far the most romantic and sweet of them, I don't necessarily think it was the best written. Still, I liked it. And I loved Eli and Zane.