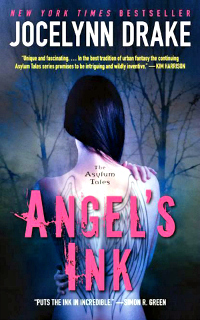 Disclosure:   A copy of this book was provided to me by the publisher.

Gage has always known that being the best tattoo artist in Low Town has its price. All magic does, and that's what his skin art is, magic. Simple spells, really. For luck, or love, or any sundry little and not-so-little thing. Still, since he escaped the warlocks of the Ivory Tower at the cost of the use of magic, among other, equally unpleasant things, any unauthorized use is enough to sign his death warrant if he's found out.

That's why Gage is so good at living under the radar. Or he was until the night a dying young woman came into his shop and asked to have angel wings tattooed on her back.

With a tug of sympathy guiding his hand, Gage worked on the ingredients in the tattoo ink. He couldn't cure the woman. No magic tattoo could cure cancer. He may be able to extend her life a little, or improve it slightly before she died. It would be his gift to a brave girl for whom he felt an odd kinship.

Unfortunately, Gage forgot one very important thing: no good deed goes unpunished. His tattoo works in ways he couldn't possibly have imagined, and now he's got Ivory Tower thugs hunting him down like a dog and the grim reaper in a snit about what he's done. So much for living under the radar. Hell, Gage will be lucky just to live to see the dawn.

As much as I loved the idea of this story and felt the world that Drake has created for the series was dark, dangerous, and imaginative, I couldn't connect to this one like I wanted to. Most of my problem with the book lies with Gage. Between his attitude and his actions, he was fairly unpalatable to me as the hero.

He lies to every single person in his life, even those who mean the most to him, and they often pay steep prices for his perpetual bad choices. And for someone who is trying to stay away from warlocks, he sure did manage to stumble and flail around through his days like he's thumbing his nose at them at every turn. I just didn't find very much to recommend him as either a man or a warlock in the story.

The secondary characters had the potential to balance out some of my issues with Gage, but most never really got the sort of definition or depth needed to make them seem much better than two dimensional cutouts to me. Those that did get some development weren't included in the story enough to have as much impact as they could have.

That was a particular problem when it came to Trixie, who is supposed to be a love interest of Gage's. It was a relationship that never seemed natural or organic to the story or the characters. I never felt a drop of emotional or sexual chemistry between them, despite Gage's alleged two-year infatuation with her, and the relationship plot threads seemed to serve little purpose beyond adding yet another dangerous, hopeless situation to Gage's plate.

And that plate was ridiculously overburdened. The plot just kept churning out life-threatening or world-ending catastrophes one after another after another in a seemingly never-ending stream of badness, with no relief and little levity to balance the depressing weight of them all. Though the book does end on a positive note, it wasn't enough of a payoff for the chaotic and depressing journey.

Return from Angel's Ink to One Good Book Home