Lighter Than I Was Hoping For 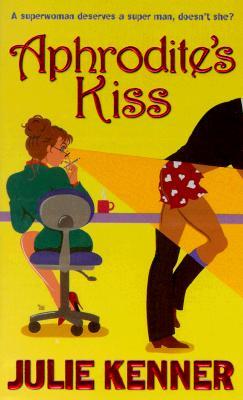 Zoe Smith is almost twenty-five years old. Instead of preparing a party for the big day, however, she's struggling with insecurities, worried about telling her mother about her halfling nature (afraid that her Mom will spurn her like she did Zoe's father before she was born), and working on her superhero skills to try to pass whatever tests she needs to pass when she submits her application to the Venerate Council of Protectors. Only problem is, she's iffy at best with telekinesis, hasn't come close to mastering flying with the cloak, and if that wasn't bad enough, as her birthday gets closer and closer, the superhuman hypersensitivity of all her senses (most women are speaking metaphorically when they talk about the orgasmic effects of chocolate - Zoe, not so much) is getting harder and harder to control. Simply put, the elementary school librarian (even potential superheros need a secret identity) is a mess. So much so that one more straw on this heavily-laden camel's back may push her into choosing forfeiting her Protector heritage and accepting mortalization, giving up her abilities and all memories of her more-than-human heritage.

He's a little down on his luck and strapped for cash since stubborn pride pushed him to leave the force when a bullet in his leg ended his ability to do field work. The private investigations business isn't exactly booming. In fact, his current case has him spying on a seemingly faithful woman with a fine reputation at the behest of his client, the scum-sucking, thug-minded husband. The whole mess is making him feel dirty. That is, until he meets Zoe during a particularly low point of the job. Five minutes with her and he knows he'll never be the same.

Zoe fights her attraction to the mortal man, even though he makes her body and heart zing stronger than the best chocolate. Unfortunately, her problems only mount when her cousin Mordichai starts popping up, acting in ways that make no sense for a fellow Protector-in-training, and don't bode particularly well for Zoe's continued existence, either. She only has a short time before her birthday, but all the worries and insecurities may have been a mighty waste of time if she can't even make it to twenty-five, let alone survive it.

Quirky and unique, Aphrodite's Kiss has several things going for it. The narrative is smooth, the dialogue has a natural conversational flow, and the mythos offers up an interesting concept, though I found it to be sparsely defined and a bit undeveloped. The romance between Taylor and Zoe was cute and sweet, but a little protracted. As a character, though, Taylor was a pleasant blend of earnest good guy and clueless male. He's got a charming, sexy way about him, balanced with a truly decent and giving nature and a protective streak a mile wide. I liked him.

Zoe was a bit flighty, which is fine for the style and tone of the story, but she was also a little slow on the uptake sometimes and her waffling about telling her mother she's a halfling and in contact with her father and older half-brother got old very quickly, as did the should-I-shouldn't-I over her attraction to Taylor. She is, in a lot of ways, an innocent. A bit naive and too trusting. Uncomplicated. Her provincialism was cute at first, but started to wear on me long before the end. Kick ass heroine who can handle herself in all situations she is not. I would have preferred it had she been more so.

The plot was my biggest problem with the book. I felt the central conflict was slow to develop and unevenly paced, and the transitions between the protagonist and antagonist threads were rough. The tone was so disparate that I found it difficult to peg just how to take the threat level. On one hand you have the hypersensitive Zoe and her wacky and wonderful friends and sweet potential romance. On the other you have a megalomaniac Outcast coldly but intently planning the death of a relative and the conquering of the world. Then the final conflict and denouement came...and went...with a startling about face and a few too many neat plot thread wrap ups.

The strongest pluses for the book were the characters, Taylor in particular, but also a nice mix of secondary and ancillary characters that added humor and poignancy to the story. I wish we'd had more page time with several of them, but I enjoyed Zoe's best friend and thought her brother was introduced quite nicely, even though he wasn't utilized as much as I'd hoped.

Despite my issues, this wasn't a badly written book. I just wish there had been more substantive development of the mythos and a more balanced tone. I would have enjoyed reading more about the Protectors and their role in the world had that been the case. Unfortunately, the biggest stumbling block for me with this book was that the light paranormal/superhero romance just wasn't to my reading tastes. Neither the stylistic choice of mixing quirky fun with serious threat or the subject matter of the sparsely explained superheros did much for me, and the female lead occasionally tried my patience. Taylor was a doll, though. No argument from me on that one.