Phenomenal Romance, But The Plot... 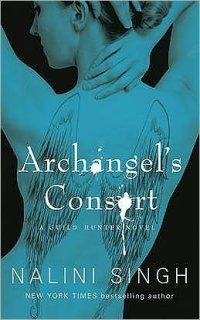 They survived Uram and fell in love. They survived Lijuan and deepened a bond the likes of which makes even an archangel a little mortal. Now, back in New York following the events of Archangel's Kiss, Guild Hunter and newly angel-Made Elena and her archangel consort Raphael feel the effects of an unimaginable force rising from Sleep. As an archangel eons older than even the unearthly Lijuan, Raphael's mother Caliane is a being that has the sort of power beyond the imaginings of even the oldest of the Cadre of Ten...and a madness to match.

Fierce natural disasters and bizarre weather patterns roar wildly across the surface of the planet and vampires and angels start acting erratic and homicidal as the Ancient slowly starts to regain consciousness after a millennium of Sleep. When she wakes, not even the combined force of every angel and archangel, Made and human in the world will be able to make her pause...let alone stop her.

And Mommy Dearest seems to be focusing her still slumberous attention on her son...and his newly Made consort with a still-mortal heart.

Picking up where Archangel's Kiss left off, Nalini Singh continues the epic romance of Elena and Raphael and broadens their lives as they return to a more normal modus operandi after her recuperation in the Refuge. It was great seeing Elena return to her Guild Hunting, even the little bit we see here, and Raphael is ever so potent as the Archangel of New York, holding the reins of North America from his aerie in Archangel Tower.

Their relationship is masterfully and powerfully written, and Singh has adeptly kept Elena and Raphael as individual and unique as they each deserve to be even as their bonds deepen. The depth of emotion between them is gripping, yet the stubborn, fiercely independent Guild Hunter and the commanding, utterly autocratic archangel are in full force. That Singh maintains the inherent nature in both these incredible characters while bringing together their hearts and souls says much about her skill as an author.

Actually, Singh has really set herself apart with the complexity and depth in all her characters, from the most primary to the ancillary and everyone in between. I have a tremendous fondness for Raphael's Seven, each with their own stories that are often alluded to but never explained, with Dmitri and Illium being obvious favorites...though I have to admit an almost obsessive curiosity about the icily ethereal Aodhan. Each of Singh's characters are fiercely compelling in their own right, and so fully realized that they seem to step out of the pages and breathe deep. Since the beginning, that gift remains one of the driving forces of my interest in this layered and complex series.

Unfortunately, this third book disappointed in ways that neither Angels' Blood (one of my favorite reads in 2009) nor Archangel's Kiss (one of my favorite reads in 2010) did, and most of those disappointments are centered around the plot. After the first two books, I think I got spoiled. Singh had an exquisite, layered, deadly plot arc in both books, with multiple plot threads beyond the main characters and their relationship. There was such a fluid definition in them that the first book lead seamlessly into the second, building threat and danger to ferocious intensity, culminating in the conclusion that left Bejing a wasteland.

So much of that wonderful depth and complexity was missing in Archangel's Consort that the plot aspects of the book were intensely disappointing. Don't get me wrong, I love this series and these characters with unimpeachable devotion. That's fact. But when I look at this book and compare it to the previous two, I had some major issues. Not the least of which was that the major conflict of this book, the build up to the awakening of the Ancient, went largely unresolved by the end, and what resolution there was ended up being tragically anticlimactic. Over eighty percent of the book was full of impending doom, and yet it ended with a bit of a whimper. And where the previous books had those layers I mentioned in the plot, this book suffered from a very limited and abrupt issue with the Archangel Neha that never really went anywhere, and some gruesome but ultimately half-hearted pot-stirring by a character for which that stirring, given the ending of the last book, seemed totally against character.

And not to be unsympathetic or anything, but by three books in, I'm a little over the depth of Elena's trauma over her childhood. It was grievously horrendous, yes. And I understand that something about being angel-Made and the year in which she was in a coma recovering from her fall has stirred that all up again and made the losses and trauma screamingly fresh. Still, each book has had so much of it that it gets to be a bit much for me, and when coupled with Elena's loathsome family, Jeffrey in particular, I end up wishing Elena would just get over it all and let Raphael kill the bastard - preferably in a long, painful manner. I just hope there's some measure of emotional resolution coming in the future.

Then there's the sex. Believe me, I'm stunned that I felt this way, but for me, there was too much of it and not enough of anything else. Not enough of the Seven, not enough of a comprehensive and layered plot, not enough realized threat, danger, or damage...nothing. It seemed like every time Elena and Raphael were in the same room they were getting groiny, and believe me, I'm all about loving the groiny, but with this rich and tasty a world, and this epic a cast of characters, I'd have happily given up a few of those sex scenes to get more development in other areas (except the one in which my two favorite angels danced - I'll keep that one, thanks).

This is such a fantastic series. The world is so unique and deliciously detailed. The creativity of the mythos and history amazes me. The characters are breathtaking in their reality and intensity, even as they heartily embrace their fantastical natures. I love this world and the people in it, and I highly recommend this entire series for fans of the genre. That is unequivocal. But in this case, and hopefully only this case, the story could have been better.