When It Raines It Pours 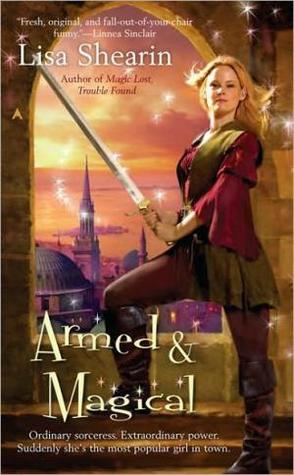 Raine Benares is on the Isle of Mid with hope that the powerful mages there will be able to free her from the Saghred's insidious influence. Since arriving she's been kept under constant surveillance and protection, Paladin Mychael's Guardians keeping her in their sights and within reach. When an assassination attempt forces her hand and displays her magical potential to allies and enemies alike, Raine becomes a political pawn and an even bigger target. Then spellsingers start to disappear and Raine discovers that a malevolent force is working to take control of the Saghred, and what protections and shields are in place may not be enough to stop it - especially when the soul-stealing rock seems to want to be used by every nefarious elf or goblin in the land.

The further I read into the Raine Benares series, the more I love Raine and her family and friends. There's something about her dry wit, her sarcasm and tongue-in-cheek humor, her willingness to risk her life - and her soul - for the people she cares about (and their willingness to do the same for her), and the likelihood that trouble will not only find her, it'll give her a big sloppy kiss and try to lift her wallet, too, that keeps me reading and wanting more. The characters are definitely the driving force of the series for me. There's a subtle romantic triangle - and I normally hate those, but it works well here, and Shearin keeps it from being a mess of angst and drama. Instead it serves to flesh out and add character dimension to Raine, Mychael, and Tam, and adds an emotional component to each of their personalities that is very appealing.

In the first book, Magic Lost, Trouble Found, I initially had some trouble warming up to the 'voice' of Raine and feeling connected with the story. Shearin writes the series from Raine's first person POV, and it's a lot heavier on narration than dialogue, so it took me awhile to get used to the limited emotional expression in the narrative and Raine's no nonsense personality. Once I did, however, that first book really worked for me, and that same sense of personality transferred very well to this book, with an added layer of emotional expression and intensity in Raine that I felt was missing in the previous book.

I wasn't as enamored with the plot of the story in Armed & Magical, however. It started quick and strong, but following an early action sequence that got the book off with a bang, it got bogged down a bit with excessive exposition, then segued into less adventuresome investigation and some political stuff that dragged for me. At several points, I could tell my attention was wandering from what was going on around Raine, and I didn't have that problem with the first book. I really liked the broadened understanding of the world and the societal structure, though, and I love the mix of fantasy and modern colloquialisms that pepper the dialogue and narrative. It gives the series a sense of hip freshness and a unique bent in the genre.

The conflict with the antagonist and the story surrounding it felt a little lackluster to me, though, coming together a bit too conveniently. And perhaps it's nothing more than perception, but it felt too close in nature to the plot of the previous book for my tastes - at least in broad-stroke generalities. Also, where I felt the danger to Raine and friends in the last book was gripping and intense through the whole of that story, in this one there were peaks and valleys, and even the most dangerous scenes seemed less visceral than the entire last quarter of the first book. For me, it made the flow of this story seem a bit choppier and less fluid, and the ending slightly anticlimactic.

There were a few points in the narrative that felt repetitive - one in particular that stuck out as being word-for-word duplication of a previous passage. I wasn't quite sure if it was a purposeful tool on the author's part to drive a point home, but regardless, the aspects of the narrative that felt repetitive - as well as the one that more than felt it - added to the drag in the narration through the middle of the book. I also have a tiny issue with how many times Raine mentions or draws on the fact that she's a Benares and speaks so often as to the many and varied reasons that's important for her or significant to her actions. I was well versed in that by the end of the first book and feel that point has been driven in a little too hard by now.

Despite being slightly less enamored with the plot and conflict of Armed & Magical, I'm completely committed to this series and look forward to spending more time with Raine and her family and friends. They really are the most thrilling and fun aspects of this series and I can't wait to see how things progress from here for all of them.