Intriguing World, But The Characters... 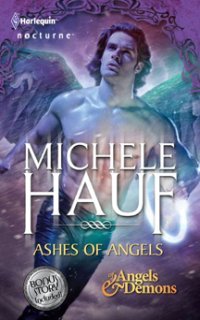 Series: Of Angels and Demons, Book 3

Note: This book includes the novella The Ninja Vampire's Girl, Book 2.5 of the Of Angels and Demons series.

Cassandra Stevens is a muse, a mortal woman who is marked from birth to be a mate for the Fallen. That may sound romantic; it's anything but. When lust-crazed Fallen find their muse they are mindless and fierce, demonic in their intent on raping and impregnating their female regardless of the muse's wishes. Then, when they impregnate the women, what is birthed is a monster of horrific proportions, a flesh- and blood-hungry nephilim that will consume everything in its path.

Her grandmother had warned her, taught her, prepared her, and Cassandra has spent her life training and learning to protect herself, because one thing Cassandra has always known, her Fallen would find her. And she had no intention of being a homicidal baby's mama.

For all that preparation, Cassandra wasn't ready when she felt the mark on her wrist start to tingle, then glow, as she was dancing in a club with a sexy stranger. To her growing horror, the wait was over. Samandirial has been summoned from Below and has come for her.

He's only been on Earth for a day, and after a quick walkabout, he's in Berlin with an intensity of purpose unlike any other Fallen. He has no intention of raping and impregnating the delectable Cassandra, not that he doesn't desire her, because he does - above all others - but he wants one thing even more than that: Above. When he'd been spit out of Below and called to Earth by the vampires, Samandirial knew they were planning to start the sort of battle that could lead to an apocalypse. If he stops them, he may finally have a chance at redemption and forgiveness. He may finally be able to go home. It is everything that ever mattered to him.

And he needs the help of his muse, the one person guaranteed to distrust him the most.

It was quite clear from the start of this book that it was an installment of a previously established series. That can often be a problem for me, especially in shorter novels, where the dearth of sufficient exposition seems common when making room for character introduction and relationship development. That wasn't a large issue for me with this book. I didn't feel I had any trouble catching on to the world that Hauf created. In fact, I enjoyed that world, though I'm weary of the large upsurge of angels in fiction lately. They're not my favorite paranormal creature. Still, in this book, their history and the mythos surrounding the multiple supernatural races was intriguing. Hauf did a nice job conceptualizing the rolls of the muses, Fallen, vampires, and the rest, weaving together their purposes and motivations into a cohesive whole supported by the story.

My problems lay in the execution of that story.

The characters were wildly inconsistent. Cassandra's initial distrust of Sam made sense given her history, but the too fast, lust-induced about-face, while necessary for the romance, didn't make sense because of that same history. She trained for years in preparation for Sam's arrival, was supposed to be an accomplished fighter and a real hard ass, but came across as a giggling, blushing, tittering twit far too often for my tastes as soon as she stopped fearing Sam. e.g. A nephalim is raging around destroying Berlin and she and her sister take a time out for a slumber party complete with hand holding and lover comparison sex talk. Really??

He's supposed to be an ages-old Fallen who's been spending most of the past few thousand years Below. Have some self respect, man. It's hard to get lusty and appreciative of a male romantic lead who strikes me more like a nerdy puppy with a nipping habit than a warrior Fallen intent on redemption and regaining Above at all costs. He also spends one day on Earth and is suddenly spouting the slang and lingo of an average twelve-year old (when he's not sounding all stiff and proper), knows everything there is to know about the history he's missed, can speak every language, and is up on all the cultural references...right up until it's more convenient for the story if he isn't. Sam's numerous inconsistencies boggled my mind.

So did the apparent and oft-mentioned glass heart of his. Talk about your less-than-sturdy containment. I was not happy with that aspect of his physiology.

Besides the characters, the narrative caused me a few moments of grief, as well. The prose was fairly pedestrian, descriptive scenes and action passages lacked sophistication and variety, and the dialogue had some rough spots that failed in achieving a natural, organic conversational flow. There were brights spots, too, of course, and a few scenes that made me chuckle or things that made me smile. It wasn't all bad.

There was this snippet of conversation between Sam and Cassandra, in fact, that made me grin:

"I've got everything under control."

"So I should have saved the one you tossed at me for you?"

"Did I toss a vampire at you? That was rude."

I do wish I'd taken the advice of the author given at the beginning and read The Ninja Vampire's Girl first. It was short, but it offered a few nice glimpses of the world that was created for the series. It also reflected some of the same problems I had with the main story. The good news is that you can dive into this book even if you haven't read the preceding books in the series. Less rosy is my lack of desire to go back and find out where this series began, nor do I have plans to continue with it from here. It was just a bit too lacking in sophistication, maturity, and polish for my personal taste.

Return to top of Ashes of Angels