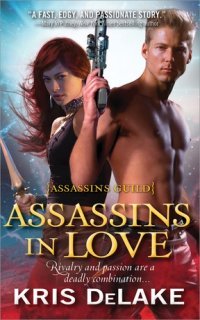 Rikki Bastogne kills people for a living. She's good at it. She does so legally, more or less, careful of the jobs she takes and the locations in which she works. Even so, it's not like her occupation is the most risk-free, nor do her targets line up with a relaxed smile and wait to be removed from existence. It's a dangerous, solitary life of secrecy and hypervigilance.

One thing is absolute for Rikki. She wants nothing to do with the Assassins Guild. She's not a joiner, the only rules she follows are her own, and she's damned if she's going to turn over any of her money to an organization that requires one and demands the other.

That's why she's traversing the NetherRealm on a spaceship cruise, trying to get her latest target out the airlock. And she's none too happy to be interrupted by one of the most gorgeous men she's ever seen while she's doing it. Her level of happiness isn't destined to get any higher when the man pushes her out of the way, completes her task, and sweeps her up as he makes his suddenly drunk-appearing way through the ship in as public a manner as possible.

Nothing covert about that. He's going to get them both arrested. And that's her greatest concern until she finds out exactly who he is. After that she's just convinced he's there to kill her.

Misha doesn't know if Rikki is immoral or just incompetent, but whichever it is, he's tired of getting picked up and questioned for jobs she's done. As an Assassins Guild member, rules and control are his religion and her actions are starting to affect his excellent reputation. That's why he's hired Rikki for the job on this ship. He had planned to yank her in and nail her down, find out if she's trying to ruin him or if she just needs his help, and either get her into the Guild or out of the business.

Misha had no idea how instant and intense his attraction would be for the fiery woman, or how memories of their past would affect his behavior. Maybe if he had, he would have done something different. Maybe if he had, he wouldn't have spent an unforgettable night with her, then let her get the better of him. Maybe he wouldn't have had to track her halfway across the galaxy all over again. Maybe. But after that one night, just one night of feeling her, tasting her, having her...Misha definitely had his doubts.

If the name Kris DeLake isn't familiar to you, maybe Kristine Kathryn Rusch rings a few bells, or a couple of the award-winning author's other pen names, Kristine Grayson (romance) or Kris Nelscott (mystery). If not, then I have to admit, you're not alone. They were new to me, too. Explains a few things, though, because this book sure didn't read like an authorial debut.

Tight writing, an imaginative, futuristic SciFi world of mayhem, death, and hot sex among the stars, great characters, and a layered plot gave this novel a wonderfully robust balance of fun and chaos that appealed to me from the first paragraph. It's an odd story, I'll say that. Or maybe unique is a better word - less negative connotations. Quirky, even.

The hard-as-nails Rikki and the chameleon Misha are far more complex and in-depth characters than those easily attached adjectives would indicate. In fact, Rikki's past and her insecurities go a long way in defining her, just as Misha's resolute dedication to his code of honor does him. In them, DeLake has crafted two memorable characters with the sort of chemistry that approaches the level of incendiary...then tossed in the match. They were fun, sexy to the point of sizzle, and oh-so-deadly.

What impressed me the most about them, and about the book, actually, is how cleverly written their interpersonal journey was. The prickly lack of trust and wariness that ebbed and flowed between them as the story progressed perfectly suited the characters and their personalities and became an organic extension of their inherent natures. It was a little frustrating on a romantic level, because you can't really grow depth of emotion in soil made rocky by distrust, but it was just right for the story and felt very realistic. Plus, by the time those trust issues started to finally be firmly resolved, several major story elements surrounding them had been kicked off and nicely fleshed out, providing a well-rounded tale that fit perfectly with the characters featured in it.

I wasn't completely sold on how the timeline of the plot and the plot itself had been laid out. There was more than one plot thread throughout the book, and it seemed the three major ones were segregated into the beginning, middle, and end of the book instead of being more cohesively blended together throughout. Each of those parts was told well enough, but the number of them prevented each from being fully developed in the page time they were given.

Especially disappointing to me was the almost perfunctory plot thread surrounding the Guild in the latter part of the book. I would have loved to have seen more of that plotline and the secondary characters introduced in it and less of the cruise ship shenanigans in the beginning. I felt the late-page introduction short-changed the ending quarter of the book just enough to keep that aspect from fully satisfying. The resolution, too, was a bit anticlimactic.

That really sums up the whole experience of the book, too. It was fun. A lot of fun. There was originality in story, a healthy dose of sizzle in the relationship, and two damaged souls that find each other, feel each other's hearts, and realize they need each other to claim their happiness as they dodge massive meteor-sized space drama. Together.

Return from Assassins in Love to 4 Star Reviews

Return from Assassins in Love to OGBDA Book Reviews Home