The Problem Wasn't His Mouth 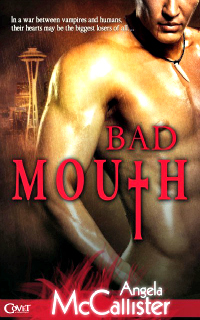 Disclosures:   An ARC of this book was provided to me by Covet publisher Entangled Publishing LLC via NetGalley.

Vampire Liaison Valerie Craig has a big, bad situation on her hands. There have been a rash of bloodings lately, vampires draining human victims, and an increase in derangements, or a transformation from human to vampire that went wrong. She has no choice but to take the matter to the king and queen of the vampire nation and ask for help to put an end to the crimes.

There are a couple of problems with her goal, however. First, Valerie loathes vampires with a deep and highly bigoted passion, so dealing with them in person always gives her a case of the willies. Even if she can get a handle on that reaction, she's got to simultaneously convince two members of undead royalty that there is a problem, and that their own people are responsible, without making one single political misstep lest the temperamental Immortalis Dominorum view her accusations as an aggressive act, potentially kicking off an inter-species war in the process. The sort of war that would not go well for the human population.

As it turns out, the vampires do something even worse than start a war. They give her one single vampire to act as her backup and mouthpiece during her investigation. And if Val's instinctive reaction to the king and queen of Dominorum is bad, then the foul-mouthed, bad-tempered killer Kade is going to give her convulsions.

She hates vampires, he hates humans, and they will have to rise above their prejudices to work together to stop the killings and prevent a war that would decimate the population of both their peoples.

I think I should have reviewed this book sooner, because the more time that's passed since I finished it, the more problems I have with the story upon reflection. There were some nice, fresh elements in the world building and concept of the plot. I enjoyed the vampire caste system and the idea of the Vampire Liaison Office for which Val works. The external conflict of the investigation into the bloodings may have been a bit pedestrian, but it was introduced well and fleshed out enough to sustain the narrative. It also provided a nice framework for the relationship arc between the two main characters.

Unfortunately, all those good individual pieces weren't assembled in a way that appealed to me. I struggled with the characters, their romance, and various plot points and story elements that either didn't make sense in the framework of the story or contradicted previously established mythos. It all just ended up seeming a bit of a frenetic mess.

My concerns started early in the book. Val's ignorance and militant bigotry was so extreme it was off-putting. She was working on legislation that would eventually result in the eradication of an entire race of sentient beings because her ex-husband was a douchebag to her. Thousands of people expendable because one guy did her wrong. That made it sort of hard for me to warm up to her as the romantic heroine.

To make matters worse, she was a hypocrite. She blasts her friend Graham for going gaga over the vampire Rex and Domina when he meets them, but five minutes after meeting Kade she does the same thing. I was far into the book before her character evolved enough for me to find her tolerable, and even then she was too inconsistent for me to really like her.

I did like Kade, though. Quite a lot. Problem is, he's supposed to be this foul-mouthed tough guy. So much so that the book is titled accordingly. Except he wasn't. Oh sure, there was profanity, and every once in a while he'd blurt out something...earthier than what one would hear in normal polite conversation, but it never struck me as egregious, nor was it consistent throughout the narrative. And by the end of the book there were more cheesy-romance mouth moments than bad mouth moments.

Val still reacted to his language throughout the book like he was a drunk sailor with poor impulse control. It got tiresome.

They did have solid sexual chemistry, and had the timeline of the story occurred over a longer span than the handful of days it does, the romance would have been a plus for me. Val and Kade just went into it with way too much baggage for me to buy that they'd get over their prejudices and fall in love in less then a week. I don't like romance arcs that culminate that quickly to begin with, and these characters started with pretty virulent antagonism that quick-flashed into romance melodrama well before the end of the book. It didn't work for me.

There were some interesting secondary characters that had surface appeal, but none of them were really fleshed out in any great detail. If I'm dealing with a series that will feature those characters as protagonists in their own book at a later time, that lack of character definition doesn't bother me as much, but nothing I've seen has mentioned that's the case with this book so I wasn't even able to be really happy with them.

Other niggling details, like seeming contradictions in established mythos (Graham bounced back faster than I thought was possible), moments of character stupidity, questionable timelines, and a Big Bad's suspect motivations all served to muddy the waters more than they entertained. And boy howdy, that Big Bad took the concept of a Long Game to extremes far beyond insidious Machiavellian intent and straight into delusional idiocy. I'm still not sure I understand the reasons behind it all.

To be fair, I didn't dislike the book while I was reading it. I didn't love it, but it was okay. It wasn't until I gave it a few days to marinate in my mind, though, that the sum the issues that had built up throughout the story started to wear down my opinion of the read. It may have had all the right pieces, but it just didn't put them together in a way that left me happy with the book. I would like to revisit the world, though. There's potential there.

Return from Bad Mouth to One Good Book Home