Focusing on the Book 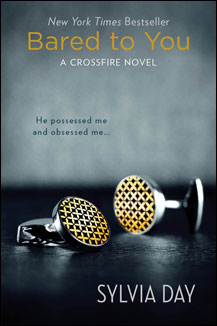 Disclosure:   An ARC of this book was provided to me through NetGalley. This rating, review, and all included thoughts and comments are my own.

When New York City newbie Eva Tramell first came face to face with the gorgeous and rich Gideon Cross, she was, quite literally, knocked on her butt by the power of her attraction for the man. It was almost a pity that all that dark and gorgeous was attached to such an offensive personality. Before she'd even learned his first name, the stunningly magnetic Mr. Cross announced his intentions towards Eva in as...plain-spoken a way possible.

Then she finds out that Gideon Cross is owner and CEO of Cross Industries and owns the building she works in. That's too much complication for her. It doesn't matter how hot the man makes her, it's not wise to sex it up where you work, even if she hadn't been extremely offended by his initial...offer.

"Think of the rudeness. I'm offended by how he just threw it out there. I hate feeling like a vagina with legs."

Problem is, it's not just Eva feeling that intense chemistry. Gideon is feeling it as well. And domineering, successful Gideon is only used to one thing: getting whatever he wants whenever he wants it. He wants Eva.

In getting what he wants, though, Gideon ends up with far more than even he'd bargained for. For the first time in his life a relationship with a woman is more than casual sex. It's more than he knows how to handle, and more, maybe, than the baggage carried by two wounded souls can handle. Giving in to their intense desire for each other will either end up bringing them more happiness than they'd ever dreamed, or burn them out and leave nothing but ashes.

It would be so easy to hop up on a soapbox and focus not on the content of this book but the rigmarole surrounding it. To chime in with my opinions on the similarities between this book and Grey. Then again, as I understand, Grey has it's own issues in that regard. Frankly, it's hard not to imagine that Day hopped on a coattail or two with this book, then rode them straight to the bank. The ramifications of that decision are what they are and honestly, they're none of my business. I have no greater or lesser power than the singular decision on where to spend my money...and where not to. So no soapbox. Just a review.

There's little doubt that Day is an accomplished author who can produce a sophisticated narrative. Parts of this story I enjoyed quite a lot. I liked the relationship between Eva and her best friend Cary, even when it gets complicated. I appreciated the emotional baggage Eva, Gideon, and Cary were dragging around, and could clearly see the affect of that baggage on the corresponding character's actions and decisions. Some of those things fit together to create a sweeping landscape of emotional damage and relationship evolution for all the characters throughout the story, but especially in the emotion-packed second half.

On a less positive note, my impressions of Eva and Gideon sea-sawed throughout the book. In the very beginning, I liked Eva's fortitude and her grasp on her self respect, and she really nailed Gideon with some excellent put-him-in-his-place zingers, but I wasn't at all happy with the endless and excessive gushing about just how god-like he is in looks and sex appeal, especially at the expense of solid backstory and character definition. At least she was consistent in her worship of the hunka hunka burnin' love, because that was about all she was consistent in, including her reaction to her family's money, which she claimed to eschew even as she took advantage of it at every turn.

There just seemed to be fairly little substance to Eva's character beyond her desire for the man and her determination to not give in to that desire. Until, of course, she completely compromised herself because her lust was just so very, very overwhelming and she wanted Gideon just that much.

Even with all that, Eva still made a better first impression than Gideon did. The twenty-eight year old, massively rich, massively gorgeous, massively arrogant, creepy stalker guy who, with no explanation for how this would even be possible, seems to own a majority of New York City. Willing suspension of disbelief was out the window at that point.

I don't care how rich you are, what twenty-eight year old man has had time to start, then build his own fully diversified corporation up to the point of making him one of the richest and most well-respected men in the world? Cross, however, is not only obscenely rich and good-looking, he owns and manages his own company, owns the building Eva works in, the one she lives in, at least two of the clubs she goes to (which he has an active enough hand in to be able to track clientele by credit card usage), one of the health clubs, a hotel, and his own home. In New York City.

Yeah...not really seeing how that's remotely plausible. If he'd inherited either the fortune, the company, or the property (preferably all three), that would be one thing, but that's not what his limited backstory seemed to imply. Not that much in the way of detailed backstory for his character is really disclosed.

I'll say this, though, as the story progressed, I found myself warming to Gideon and souring on Eva. At least Gideon was trying, albeit in a completely dysfunctional way at times. Eva just runs away like a child when things with Gideon get screwed up (which is, admittedly, frequent). Then Gideon chases after her, they make up, and proceed to have the Best. Sex. Ever. Every time. This seems to be the basic formula of their relationship throughout most of the book. Even when she's telling him she's not running...as she's running. It got a little absurd at times.

The sex is explicit, graphic, and erotic, yes. And there is certainly quite a lot of it. No problem for me there. I had no problem with the romance between Gideon and Eva in the latter part of the book, either. It had it's ups and downs, but I started to really like Gideon and wanted him to have some happiness, and Eva had some lovely moments of establishing personal boundaries and forcing Gideon to recognize and respect them. He was controlling and dominant, yes, but other than that freaky stalker stuff in the beginning, he didn't strike me as all that different from any random über-alpha, possessive male. He was also obviously helpless in his feelings for Eva, and that was endearing in places as he is so clearly in uncharted waters.

I don't think Bared to You is a bad book, exactly, so much as an uneven one. It has elements that work very well, and it has characters who are sympathetic and likable, though that comes and goes for each character. Some elements of the story are utterly unrealistic, and Gideon and Eva are extremely childish in places. They're also utterly hot and wonderfully erotic in others. Parts of their story touched me, parts annoyed me, parts disgusted me, parts amused me. In the end, summing everything up and averaging it all out, the pluses didn't quite outweigh the minuses...but they did at least mitigate some of them.

Return from Bared to You to Contemporary Romance Genre

Return from Bared to You to OGBDA Book Reviews Home