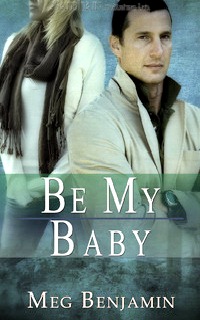 Jessamyn Carroll fled Pennsylvania with her infant son when her rich and powerful mother-in-law made it clear that she was expected to bring the baby into the family fold...a fold that Jess's deceased husband had escaped years before he'd met and married Jessamyn. Mommy dearest will stop at nothing to get her grandson back - absolutely nothing, and Jess has taken refuge under her maiden name in Konigsburg, careful to keep her whereabouts a secret from the long reach of her mother-in-law. But making ends meet is tough for any single mother. More so when she's got to keep her head down and watch out for any potential threat.

Lars Toleffson is glad he moved down to Konigsburg after his two brothers, Cal and Pete, who are now both married and living happy lives with his new sisters-in-law. He's got willing baby sitters every time he turns around, but the stress of being a single father combined with his two year old daughter's...precocious nature (and the Mississippi is a small stream) is wearing on him. Now that his daughter's daily caretaker is moving, he's got to find someone else to watch her every day. Taking out an add in the paper for a new caretaker brings Jessamyn Carroll to his office.

The pretty Jess stirs Lars' juices, but a horrendous previous marriage and debilitating divorce keeps him firmly hands-off. Jess is as pretty as new sin and great as a caretaker, but his juices are just going to have stew for a little longer. At least until a stranger asking odd questions shows up in a town that doesn't feel too warmly about strangers and less so about presumptuous questions just before Jess' home gets broken into - twice - and she gets assaulted by the perpetrator. Before Lars even realizes it, protective instincts he hadn't counted on heat those stewing juices to a boiling point.

Welcome back to Konigsburg, Texas, tourist mecca and home to lots of quirky characters just a bit off from center. Since the Toleffson brothers showed up it's been one wild romance after another - and a true treat for happy readers everywhere. With each book, Benjamin has broadened and deepened the world of Konigsburg and the characters who populate it, improving stylistically with each turn. From a technical standpoint, I think Be My Baby is the most well rounded and developed of all the books, with a detailed plot, appealing, endearing characters, a steady, flowing narrative, and realistic dialogue, though Venus in Blue Jeans still wins my vote for the highest level of quirky character fun and humor.

The most serious of the first three books, Jess and Lars both have pasts that have scarred their hearts and impacted their daily lives, and tragedy has struck Jess in particular very deeply. The humor is more subtle and intermittent than in the previous books, though Konigsburg's finest still shine bright. Overall, the story maintains a nice balance between humor and suspense, and there are far fewer gaps in plot, timing, and transition than in the previous books in the series. I did, however, feel the ending was too slick and quickly wrapped up, with all the secondary plots threads getting tied off too cleanly. Lars' ex-wife Sherice, for example, went from being a plot thread to a footnote with jarring abruptness given the way that thread had developed. It was exceptionally anticlimactic, especially as I was hoping to finally see her get what she so richly deserves.

Still, I think Be My Baby is the most technically and stylistically well written and developed. Even with that, though, it's not my favorite of the Konigsburg books, for strictly subjective and personal preference-based reasons. In the end, I just wasn't as fond of Lars as I was of Cal and didn't think he had quite the scope of development through the story arc of book that Pete had in his. I liked him, but there just wasn't much about him that made his character really stand out for me. I felt similarly of Jess, but had the added problem of questioning her intelligence and logic in more than a few places. Maybe that's not something I should blame Jess for, but when she repeatedly turned down a safer haven closer to town because of her primary job and the promise she made to the vacationing owner, but contemplates just up and leaving town entirely when she fears her mother-in-law is closing in, I questioned her decision making. You can't move into town because of prior commitments...but leaving town is fine? That issue in particular seemed too much like author's choice to get the plot to a certain point, instead of organic character action. I also had a problem with the development of the romance between Lars and Jess. I read of their growing affection for each other and their hot little lust moments, but I never really felt there was any real fire behind it. I couldn't get fully on board with the romantic aspects of the relationship because of it.

I also had sort of an odd problem with Lars' daughter, Daisy. I freely admit that I have no kids and almost no experience with two-year-olds, but her dialogue and actions seemed to me to be advanced beyond her age and it kept tripping me up when she was in a scene. I could be totally off base with the cognitive and verbal abilities of a toddler, or she could be an atypical child, I know and acknowledge that. But even so, as I was reading, the issues I had distracted me when she was in the scene.

For those reasons, Be My Baby wasn't my favorite in the series, even though I recognize it's a more complete and balanced book with a more fully formed and realized plot. What hasn't changed, though, is my appreciation for Benjamin's Konigsburg, Texas series as a whole and my anticipated delight in reading the story of the final, and for me the most intriguing of the Toleffson brothers, Erik. Going hand in hand with the continuing improvement of the series, Erik is the most damaged and layered of all the brothers and the juxtaposition of those two things provide tremendous potential for a meaty, fun book. I can't wait to read his story in Long Time Gone: Konigsburg, Texas Book 4.

Return from Be My Baby to Contemporary Romance Genre

Return from Be My Baby to OGBDA Book Reviews Home