Packs a Hell of an Emotional Punch 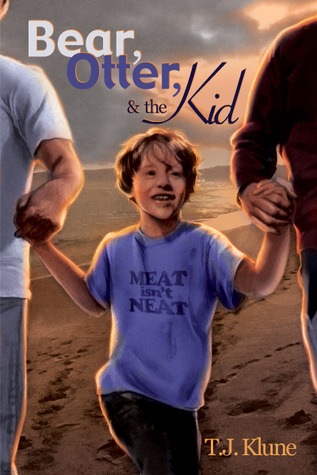 The day before Derrick "Bear" McKenna's eighteenth birthday, his mother gave him the sort of birthday present from which Bear may never recover. A letter. Saying goodbye.

When he wakes up on his birthday he is sick with fear and anger and loss. He's just a kid himself, really, but suddenly he is the sole parental figure for his exceptional six-year-old brother, Tyson, aka the Kid. His college fund is gone right along with his plans for the future, and he is left to figure out how to take care of the Kid with the exactly $137.50 (of his own money) his mother was...kind enough...to leave for them.

Desperate and near crazed with the horror of it all, Bear reaches out to the one person he trusts more than anyone, the one who means more to him than anyone, even more than his best friend Creed and his girlfriend Anna, though he never, ever examines those feelings. And when Bear, mired in depression and desperation and soaked to the gills in booze, reaches out to Creed's older brother Otter and Otter comes to his aid, Bear steps over a line he isn't capable of even recognizing, let alone being comfortable with.

And he loses everything that matters...again...because of it. Everything except the Kid.

For three years Bear and the Kid are on their own. While the time passes, Creed goes off to college, Bear gets a promotion at the grocery store where he and Anna work, the Kid becomes truly terrifying with his intelligence, and things settle into a routine. Some days are good. Some days aren't. Life moves on. Then suddenly, on the same day Creed flies home for his summer break, another friend long gone returns. After three long, painful, bitter years, Otter is home.

And life for Bear will never be the same again. Whether it'll be better...or far, far worse...only time will tell.

There's a ton of things to like about Klune's debut, Bear, Otter, & the Kid, not the least of which is it's a hell of an emotional roller coaster that slammed into my heart with the force of a major detonation. With main characters named Bear, Otter, and the Kid, along with some rather unique stylistic choices in the narrative, there's almost fairy tale quality about the book - but it's definitely more towards the Grimm side of fairy tales. Not that there isn't humor, in fact, there were parts that made me chuckle out loud, but there is quite a lot of less-than-pleasant reality, too, as Bear struggles to raise both himself and his little brother as his life and his identity are put through the wringer.

As far as the characters go, I. Loved. The Kid. Loved him. He was my favorite character of the book by far. In fact, for all the thousands of books I've read in my life, for all the millions of characters that have flitted through my consciousness, only to pass out of my mind to make room for the next crowd, the Kid made a place for himself right near the top of the heap. And I was also very fond of Otter, who I appreciated both for his decisions - even when they were impossible and painful - and for his open, generous, loving heart.

But Bear... God, Bear... There were times I just wanted to drown him in that ocean of his and move on. He was just a little too...stuck in his head...all the time, over everything, and it made for some frustrating reading. So much of the melodramatic angst of the book could have been avoided if he'd just manned up and spoken up or spoken out. Would it have been as powerfully emotional a read? No, but I would've felt better about his mental state and his emotional maturity.

In all honesty, I had difficulty viewing Bear as a strong lead character in a successful romance because of his age and his personality and it's pretty much the sole reason I couldn't rate the book with a full complement of stars. Even very close to the end of the book Bear still struck me as needy and judgmental, prickly and defensive, terrified and hostile. And I am not a fan of hypocrisy in any form, so Bear's reaction to Creed and Anna really bothered me. It was totally realistic and believable, don't get me wrong, but I'm no larger a fan of hypocrisy in my fiction than I am of it in my life, and it tends to bother me whenever I encounter it.

I very much enjoyed the loose format, fluid timeline, and more stream-of-consciousness narrative, but I wasn't a fan of the first person, present tense POV. It had the unfortunate result of highlighting all my issues with getting stuck in Bear's head. That being said, the plot was well conceived and executed and the pacing of the emotional ups and downs was consistent throughout the book

A few plot threads confused me a little, there were a couple of times I wasn't sure exactly what the significance or impact a scene was really suppose to have, or was unable to glean the meaning in the subtext while the characters seemed to be doing so. A few balls were dropped, a few scenes didn't make sense, or lacked some believability. Nothing too major, really.

There were also several plot threads that were left unresolved or those which could have been better developed to add a bit of depth and dimension to the plot. The whole mother thing, while providing several gut-wrenching scenes that were successfully horrific and emotionally traumatizing, didn't make a lot of sense in the big picture of the story. Without readers being given a reason for her to show up, an explanation of how she knew what she knew, or having anything relating to her presence tied into the rest of the story, it ended up seeming more like a plot contrivance than an organic evolution to the events of the story.

As an epic emotional journey that rips out your guts and leaves your shattered heart pattering weakly in your chest, Bear, Otter, & the Kid was wildly, crazily successful. I felt like my emotions had been through a natural disaster when this book was done. I'm pretty sure my soul would've looked like a tornado-ravaged town if I could've taken its picture. It may not have been a perfect book, but it was so powerful on an emotional level that despite the issues I mentioned, I ended up feeling both deeply moved and glad I had read it. Heck, even if the book had nothing more going for it than the Kid (which isn't the case by any means), it still would've been a right good time.

And I have to say it again. Loved. The Kid.

I really liked this book as well. I sort of felt that the Kid was too grown at times, especially towards the end. The mother was too freaking much and I wanted to STRANGLE her, what a b!tch and how absolutely not needed for the story.

I was really rooting for these two. I did think it a bit hypocritical of Bear with his reaction to Anna and Creed, but a very human one. No one ever thinks about what they've been doing only what's being done to them (I know plenty of ppl like this).

Glad you enjoyed the story as well. I've re-read it a couple of times already :)

I love when you add your thoughts about books we've both read, Mariana! Especially about the reaction Bear had about Anna and Creed. I tried to emphasize in my review that I thought it was completely believable (not only do I know ppl like that, I have points in my past where I have done something like that, much as it pains me to admit), but maybe that point got buried under my dislike of it in fiction/life now.

I thought the Kid seemed a bit too grown up at times, too, actually - but I couldn't help but totally love him anyway! ;-)

Return from Bear, Otter, & the Kid to LGBT-M/M

Return from Bear, Otter, & the Kid to One Good Book Home