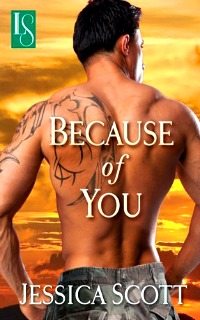 He felt the pull, that elemental attraction of a man to a woman, from the moment he saw her in the bar the night before he and his men were to be deployed overseas. The kiss they shared would linger in his mind for a while, a fond memory of a slice of rare sweetness. Where Sergeant First Class Shane Garrison was going, he knew there was a lot of heat and sand, but nothing remotely resembling anything sweet.

It'd been so long since Registered Nurse Jen St. James had felt like a sexy, attractive woman that she hardly recognized the sensation when Shane kissed her. Battling the cancer that she sacrificed a breast to survive has left her scarred both physically and emotionally, but that one kiss sparked something in Jen she hadn't expected. Desire. It's just her luck that it's for a man sworn into service to his country and anxious to deploy so he can get back to his job.

This deployment, though, isn't quite like anything Shane has ever experienced before. Not only are tensions in the platoon running high thanks to a superior officer doing his best to be as incompetent as possible, but the missions are hot and extremely dangerous. And long ago he learned a valuable lesson about missions, knew that no matter how well trained, how good your intel, how prepared you are, sometimes the only difference between situation normal and SNAFU is luck.

Pinned down on a dusty Iraqi road, taking heavy fire and desperate for decent cover, Shane's luck runs out.

Jen hadn't expected to see Shane again so soon, and she would have given anything not to have seen him quite this way, clinging to life at the base hospital where Jen works. When he comes to and is informed of the condition of his body, Jen realizes that her feelings for Shane aren't going anywhere, but the man he used to be, a man who defines himself by his calling to serve his country and his dedication to the men under his command, may be gone forever.

It's almost a pity that the cover of Scott's authorial and series debut is so damn pretty, because it in no way prepared me for the gritty and realistic emotional journey that takes place between Jen and Shane over the course of the story. It is a far more weighty and significant a tale than I was expecting. At turns tense and heartbreaking, sometimes emotionally devastating, Because of You is complex and layered, with touches of humor here and there to lighten, in a very small way, the intensity of the jagged, corrosive price of war on those who fight it.

Jen may not be a soldier, but her battle and tentative victory over breast cancer helped define her character. I really enjoyed her, and commend Scott on a realistic portrayal of the effects losing a breast could have on a young woman. There were moments when her issues with her self-image overwhelmed her and moments when she was just so damn strong it killed me. Through it all she was a calm voice of reason in a storm of male uncertainty and panic. She's a character I ended up respecting a hell of a lot.

I wasn't as enamored with Shane on a personal level. Oh, I absolutely believed, beyond a shadow of doubt, that Shane's physical and emotional response to his injuries is very true-to-life. Capturing that in all its grim and uncomfortable glory is a testament to Scott's writing ability and her own military experience. Shane was a painfully realistic character, believable to the extreme, damaged, complex, and complicated. I just didn't like him.

His over-inflated sense of personal responsibility bordered on a god complex...or a martyr complex...and both lost its appeal long before his surly attitude and self-pity waned. If I had been expecting a different sort of story, something less light and sexy like the book cover suggests, I could have focused on the awesomeness of the writing for his character, because I gotta say, it was absolutely spot on. Because of my expectations, though, I just ended up annoyed with him and feeling like his attitude dampened the effectiveness of the romance in the book.

It is a grim reality that soldiers sometimes don't come home alive. And sometimes, those who do don't come home in one piece, either physically, mentally, or both. Terms and phrases like post-traumatic stress disorder and survivor's guilt have become a part of our modern lexicon for that very reason. That's the reality of the world we live in. Scott captured that, wove it into a story of survival and recovery, and created a sweeping and emotional tale. It just wasn't quite the tale I was expecting. It was just, for me, a little too real to be consistently entertaining.

There were also a few plot points left unresolved, points that I hope carry over into the next book in the series. Personal and professional problems concerning Shane's friend and CO Trent Davila and his wife Laura started as ancillary plot threads in this book, but there was almost nothing in the way of clarification or resolution provided. The conclusion of the book was fairly open-ended in regards to them, but very dire.

I enjoyed those story threads on their own, but the addition did seem to muddy the waters towards the end of the book and impinged on the conclusion of the arc of the romance between Shane and Jen. That, combined with the fact that I was totally unsatisfied by the lack of resolution relating to Shane's over-inflated sense of responsibility kept this book from being a completely satisfying romantic read.

As a realistic, gritty, and devastating emotional journey of two hearts battered by their own personal battles as well as external conflicts both foreign and domestic, though, it was an extremely well-written and gripping book. Whoever suggested to Scott that she should try her hand at writing professionally deserves a medal. And for Scott, who has served her country in ways I can't even begin to truly comprehend, well...she probably has some already. And she has my respect and heartfelt appreciation for her service, as well.

Return from Because of You to Contemporary Romance

Return from Because of You to OGBDA Book Reviews Home