I Love a Raine Night 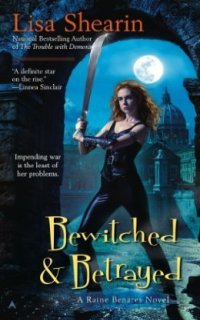 Once a Seeker with modest magical talents, Raine Benares is now bonded to a soul-sucking rock known as the Saghred and got both a major power upgrade and a plethora of people out to kill her so they can steal it and use it for their own nefarious purposes. Fortunately, Raine's not dead yet, and neither are the people she cares most about. For Raine, that constitutes a good day. Unfortunately for Raine, that's all that constitutes a good day in the continuing nightmare that is life as the Saghred's bondservant.

Now she's racing around trying to catch the twisted, evil souls that slipped from the Saghred when the Demon Queen managed to open it. The megalomaniacal psychopath Sarad Nukpana is one of those souls, but Raine has a deep, sinking, terrifying suspicion that she won't have to hunt down that monster. She has no doubt he'll be coming after her. When the dessicated corpse of a high ranking elven general is literally dropped at her feet with a message for her from Nukpana, her suspicions are confirmed. And worse, he says everyone she holds dear is next.

Another fun day in the life of Raine Benares.

Bewitched & Betrayed is just as action-packed, just as teeming with lovable characters, just as wild a roller coaster ride as the first three books in the series. Told in first person from Raine's POV, she is the core of the series and I adore her. She's such a feisty, stubborn elf, and despite odds most surely stacked against her, manages to grit her teeth (mostly to stop the screaming), lock her legs (uh...mostly to keep herself from fleeing in terror), and fight back with everything she is and ever will be. The narrative, her internal monologue, is rife with sardonic and self-effacing humor that makes her ever so sympathetic and lends a lot of humor to a seemingly never-ending series of increasingly deadly situations.

She's not fighting alone, though. She's got the elven force of light that is Paladin Mychael Eiliesor, and the seductive darkness that is goblin Tamnais Nathrach, as well as her cousin Phaelan and her bodyguard Vegard, among others. In fact, the longer she's chained to the Saghred, the more genuine friends and allies she realizes she has. That's probably a good thing, because the number of her enemies sure aren't getting any smaller. As secondary and ancillary characters, they're all richly drawn and nicely fleshed out. Even the horrifying ones.

And holy cow, Mychael was given a bunch of fantastic character development in this book. He was included in more of the story than he's been in the previous books (more Mychael is always a good thing) and we get to find out a little about his past. I loved every minute of it. Not to mention how much I adored the resolution of the romantic triangle between Raine, Mychael, and Tam. My hat is off to Lisa Shearin for that, because not only was it finally resolved and done without a lot of needless angst, it was also done with aplomb and in the big picture, genuinely furthered the overall series arc. I love it when that happens.

There are still a few issues, and they've been issues throughout the series. This book suffered a similar excess of exposition as other books in the series. In fact, because both the episodic book plot threads and the overall series arc plot threads are so complex and layered, with each book Raine's "synopsis" segments get longer and longer. Because I've read each book in the series, those sections seriously bog down the pacing, even as they allow for new readers to catch up with what's been going on so far. I'd love to see a far more condensed version of the exposition in future books.

One of the biggest issues I had with the previous books was far less prevalent in this book. Repetition in the narrative has been a complaint of mine since the first book in the series, Magic Lost, Trouble Found. Information and phrasing in the narrative was oft repeated throughout the books. There's still some of that, but to a far lesser degree. And while Raine of course mentions being a Benares and all that implies more than once, it seemed much less frequent than in previous books.

A few other big positives for this book were the resolution of a few of the dangling plot threads, the introduction of a couple of intriguing new characters, and some absolutely delicious series arc plot progression. I felt at the end of the last book, The Trouble with Demons, that Raine and Co. weren't any better off at the end of it than they were at the beginning, and the problems just kept on getting deeper and deeper. In this book, though the problems are far, far from over, the characters have scored a few key victories and everyone seems to be ready to continue the fight more positively and proactively. It's like the gloves are off and the growing anti-Saghred and anti-Nukpana force is ready to not only up the game a notch, but blow their opponent right off the board.

Personally, I can't wait to see what comes next. Thankfully, I won't have to wait long, as Con & Conjure will be available 3/29/11.