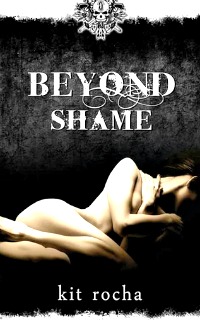 Disclosure:   An ARC of this book was provided to me via NetGalley.

Noelle Cunningham broke the rules, and punishment for her crime meant banishment from the city of Eden. It had been the only home she'd ever known. Now lost, alone, and deep in the slums that surround the walled Eden, she is at the mercy of the brutal thugs that rule the dark, decaying landscape.

Just as Noelle is about to fall victim of one such thug, she runs into a man unlike any she's ever seen. Inked up, grim, muscular, he could be her worst nightmare. Instead, as she falls into the unknown gang member's arms, drugged to the gills and barely conscious, she has only hope that he can be her savior.

Jasper McCray, right hand man to Sector Four's gang leader, is more devil than angel, but something about the helpless and innocent Noelle stirs every one of his protective instincts. She is elegance and refinement in a world that has lost both, and he wants her. Life in the slums is dangerous, though, even deadly, and the O'Kane gang runs the sector with an iron fist. They work hard, and they sure as hell play hard. Sex is frequent and varied and far darker than anything anyone in Eden could comprehend.

He may want the soft, beautiful Noelle, but she may not be able to handle living the life he lives, the sort of life everyone in the gang embraces. And if she doesn't give herself, if she can't give over to the sexuality he senses brimming in her, she will be no better off than if he'd not rescued her. Only time will tell if, when she's told what's expected of her, her initial survival will become permanent membership into the gang. Or death.

The highlight of the book for me was the characters. Complex and layered, with their own issues, faults, and strengths, they were colorful and entertaining. Well...except for Noelle. I understood her nature, easily grasped the impetus that drove her to violate Eden's laws and join with the O'Kane gang. Her timidity in all things as she started to recognize and embrace her sexual desires, however, bored me. She's just not the sort of female lead character I enjoy reading about.

Lex, on the other hand, rocked my world. Strong, smart, independent, wicked, powerful...with a soft, nurturing side just as significant, she was almost perfect for me. And her relationship with Dallas is definitely one of the more complex I've read lately. I enjoyed her quite a lot. Unfortunately she wasn't the heroine of this book.

It wasn't my favorite read of the year, nor am I certain at this point as to whether I would continue the series if given the opportunity. I think it would depend on who is featured as the main characters. I have to say, though...and maybe I'm damning the book with faint praise, but given how many elements of the book are in almost direct opposition of my personal reading preferences, the fact that I enjoyed it as much as I did is really a testament to the book and the pair of best friends who wrote it. I would absolutely recommend it for readers who favor those elements I don't.

Return from Beyond Shame to 2012 Reviews

Return from Beyond Shame to One Good Book Home