Beyond the Darkness Delight 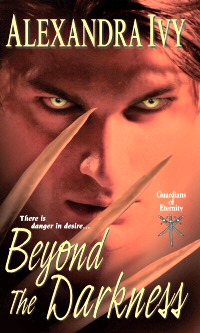 I admit, I believe the Guardians of Eternity series hasn't quite reached the level of exceptional paranormal romance (yet). I think it's a very solid and satisfying paranormal romance series - with a slight issue here and there. There doesn't seem to be a lot that differentiates and individualizes the lead romantic pairing in each book in either character development or the formula of the evolving romance, and I believe that is what separates the solid and satisfying from the exceptional. I've long been a huge fan of paranormal romance novels and series, though, so I have a pretty high tolerance for that lack of differentiation and individualization. It's a common malady in the paranormal romance series sub-genre. That being said, there are some series, like Christine Feehan's Carpathians, that I stopped reading a long time ago because the formula got to be too much, the characters too interchangeable, the women too often somehow lesser than their mates. I'm taking a break (and have been since Acheron) from Sherrilyn Kenyon's Dark Hunter series for similar reasons.

I'm still reading Alexandra Ivy's Guardians of Eternity series. Why? Because it's still giving me exactly what I like in my paranormal romance novels. An uber-alpha male and a strong, independent female that lock heads, fangs, fists and wits, humor, and charm to create an explosive chemistry that works for me quite nicely. There's also the characters from previous novels that get tossed into the mix, and I love seeing the continuing development there.

In Beyond the Darkness, in particular, Ivy has gone one step further, and seems to have added another dimension to the series arc, hinting at something coming that may draw together all the characters we've met so far and pit them against one decidedly evil threat to all demonkind. It was a tantalizing and tricky thing to do, because it provided the series a cohesion and depth previously unattained. Not to mention, this particular book is the first of the series to provide a male pureblood werewolf as top dog (so to speak) instead of another of the leeches (as Salvatore would call them), so we got to get a much better - though still too brief for me - view of the difference between the vampire culture and the declining werewolf culture. The differences were handled nicely, even if I wish I'd seen a few more of them to make them really stand out. When combined with my appreciation for the series and the characters to date, it raised my enjoyment of this book and the series even higher.

Not to mention that Alexandra Ivy has managed to take a character I have disliked since he was introduced, Salvatore Giuliani, and made me not only like him (a little), but understand him better and appreciate his responsibilities and the demands of saving a race from extinction. That stunned me, because I said in my review of Darkness Unleashed (Guardians of Eternity, Book 5) I was not looking forward to a book about Giuliani. Up until this point I've found him arrogant, manipulative, and at turns boorish and sadistic in how he treated his curs and females. There was a lot of ground to cover to get me to like him, and while he still isn't my favorite character, I admit, I did warm to him. I had no such trouble with Harley. I found her just as competent, intelligent, and strong as all of Ivy's female leads (except maybe Abby). I enjoyed very much her calling Giuliani to task again and again for his arrogance and I appreciated her willful resistance to bowing to the alpha's power. I thought the plot supporting her backstory was well defined and explained everything about her character. In fact, I think this is the first book in the series in which I completely bought into exactly why the male and female lead are exactly the way they are and was very impressed by how deftly the author blended the pair without diminishing either individual.

Salvatore has been searching for the four genetically altered pureblood cubs for thirty years, and has finally stumbled across the third (after the first fell in love and mated to the vampire Anasso, Styx, and the second proved to be barren...though she also fell under the spell of the leech Jagr, and Salvatore had no chance there). Imagine his surprise when he realizes that the third of the female cubs, the delicate in appearance but anything but delicate in reality Harley, is not only within his grasp, but is also his true mate - a bond he thought lost to the mysteries of the past for his species, as it had been a hundred years or more since the last pureblood true mating. Harley has been living cloistered from the werewolves, kept hidden by Caine, the upstart cur who's been using Harley's blood to try to find his personal holy grail - turning curs into purebloods and being the messiah of the species. She's been lied to her entire life - about the death of her sisters at the claws of the Were King himself, in particular, so meeting up with him on a moonlit night sends terror through her heart and violence through her soul. Neither know, nor soon realize, that each are a pawn in a far deadlier game, and ancient evil and a long dead nemesis rise against them both. If they fall, they lose more than their lives, they lose the entirety of the battered and beleaguered were species.

Excellent novel, and a fun, fast read. It didn't have quite the same amount of humor that some of the others in the series do, and I truly missed the sardonic acceptance that each of the vampires showed when they realized their mates weren't going to make life easy on them. Salvatore was less humorous, more intense that way - but in his defense, he had some truly charming and adorable moments towards the end that I won't go into further to prevent spoilers. They were endearing, though. Beyond the Darkness is also the first in the series that has set me on the edge of my seat for the next - and it's exactly because of the added dimension I mentioned as well as the plot thread with Caine. Dastardly Ivy keeps making her books better and better. I very much enjoyed it.

Return from Beyond the Darkness to Paranormal Romance

Return from Beyond the Darkness to One Good Book Home