Beyond the Misty Shore 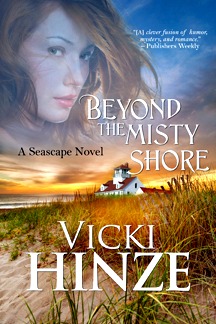 Disclosure:   An ARC of this book was provided to me by Bell Bridge Books via NetGalley. This rating, review, and all included thoughts and comments are my own.

Artist T.J. MacGregor had come to the Seascape Inn to heal. To find peace. There had been a sense of something almost magical about the place on his first visit years ago, and after suffering yet another painful loss and a crushing personal blow, coming back to Seascape had offered him the only hope he could find. That was nine months ago. He still hasn't left.

Whenever he tries to so much as step over Seascape's property line, his body is seared by a crushing and bone-deep cold, a brutal cold that strips him of consciousness and leaves him passed out and shivering. His hope has become his prison. His haven a hell. And he has no idea how to break free.

Two years ago, Maggie Wright's cousin Carolyn died in a mysterious car accident that Maggie suspected wasn't all that accidental. Only now can Maggie follow through on a promise she made, a promise to investigate what really happened, to find out why Carolyn was where she was when the car crashed, and maybe even discover who had caused the crash. Maggie had her suspicions and they began and ended with her cousin's fiancé, the respected artist Tyler James, also known as T.J. MacGregor. But she has to find him to question him.

She tries his studio in New Orleans first, but instead of answers, or the man himself, she finds a painting that practically reaches out and embraces her in a cocoon of peace and protection. A painting that shouldn't still exist, if the stories of Carolyn's accident are true. It is a piece she couldn't come close to affording on her own, but the sense of serenity she feels when she gazes at it is one she hasn't felt since she was a child. In that instant, Maggie knows she's going to the place in the painting, the Seascape Inn, for a stay. It is almost a compulsion. Or a quest for something she hadn't realized she desperately needed.

It's her good luck that the very man she seeks to question about her cousin literally trips over her as she is toting her luggage to her room in the inn just days later. Well, it's some sort of luck, at least, as meeting the surly and antagonistic man who probably had a hand in her cousin's death doesn't exactly strike her in any way good. In fact, he pushes every one of her seriously annoyed buttons, and despite the situation...or maybe because of it...she revels in doing her level best to return the favor.

She hasn't even gotten a chance to pin him down for answers before something...odd...about the inn they share starts to seep ever-so-slowly into her consciousness. There is peace - at times - and a feeling of being watched and weighed when no human eyes are around. Then there are those episodes she sees from her window. Inexplicable episodes of...something...when she spots T.J. down by the beach, when she sees him try - flailing and batting at an unseen assailant as he does - to step across some line she can't fathom. When he passes out and collapses from the effort. Every time.

Something is very weird at the Seascape Inn. Something Maggie doesn't understand but can't deny. And it's starting to draw her closer to the one man who not only obviously wants nothing to do with her, but who may have been responsible for the death of her cousin.

For all that I read, or maybe because of it, I'm rarely surprised by a book. There are always going to be books that are better than I expected, some that aren't as good as I'd anticipated, and occasionally a book blurb doesn't accurately represent the book's contents. That's just how it goes and it's not what I mean by being surprised. That's a part of it, maybe, but it's not the whole.

Beyond the Misty Shore surprised me. It was a wonderful love story. And it was so much more. It was a ghost story. A mystery. A sexy romance. It was quirky. Funny. Had moments of tragic loss and gentle hope. It had cute characters with small-town appeal. Stubborn characters with sardonic wit. It was weird. Even a little scary sometimes. It was written with poise and grace and had passages that were so beautifully lyrical they were almost poetic. It was, in a word, unique.

I wasn't expecting to be so captivated by the creep-factor. Or for the characters to grow on me so quickly. Or for the obviously haunted inn to be so subtly and sublimely woven into a story centered in the gift of timeless, selfless love and healing hearts. This book was just so much more than I expected on every front. It exceeded all expectation.

The relationship between Maggie and MacGregor, tense at first, then warming, but quirky and fun throughout, enchanted me. Both are wounded. Both find solace at Seascape and eventually with each other. Their neediness and yearning for peace was intrinsic to them but didn't make them grasping or needy. Their wounded wariness made them real. The metaphorical teeth they bared at each other because of it made them a lot of fun. And the sparks they struck off each other made me chuckle...and eventually pant.

I loved them for their humor when they needed to keep the fear of several big unknowns at bay. I felt for how their growing feelings for each other stirred their panic over their loss of control. They tease each other, and fight loudly, and I adored that. I understood who they are and sympathized with how damaged they were. They were as close to perfect for each other and as characters as any I've read in recent memory.

The grandmotherly Miss Hattie, caretaker of Seascape Inn, was a charming enigma. The woo-woo element of the place was both chilling and heartening at turns. More than one force was at work in the place, not all my questions were answered about that, and I sure did spend a good portion of the book debating on whether the haunting elements were well-intentioned or not. The book clung tight to its mysteries, for sure. All of that was icing on an already pretty fantastic cake, because it kept me thinking.

And simply, it was very beautifully written. It perfectly captured the scene and setting, the history and the mystery, and the deep, complex, sometimes conflicting emotions that are startingly realistic despite the fantastical situation. Powerful emotions, hearty story of love, loss, forgiveness and hope, sweeping romance. This book, quite literally, had it all. I loved it.

Return from Beyond the Misty Shore to Paranormal Romance Genre

Return from Beyond the Misty Shore to OGBDA Book Review Home