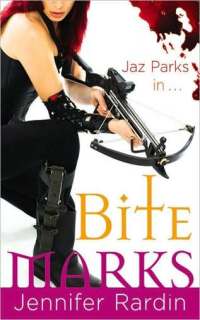 Looking for a turbo-charged actionfest? Want a solid urban fantasy read with a heroine that doesn't make you want to smack her for being stupid or neurotic? Want a fine hunk of a vamp to partner with her? Protect her? Be willing to die for her? Even though she doesn't need him to because she's strong in her own right?

Well then look no further, peeps, because Rardin's Jaz Parks series delivers it all on a silver platter for your reading delight.

If you're unfamiliar with the series - and as it's now coming out in mass market paperback a book at a time, I hope those numbers dwindle significantly - then start with book #1 in the series, Once Bitten, Twice Shy (Jaz Parks). The series is layered, plots and characters intertwined, and while each book has its own arc, none can be fully appreciated as a stand-alone. There are too many things that go on as a result of occurrences in previous books, too many nods given to past moments.

I've been a fan of the series since the beginning; it's absolutely one of my favorite series in the genre. Not because the books are perfect on their own - they're not. In fact, there are aspects of the story telling in each book that I would have preferred done differently, but in this case, the experience of the series as a whole is greater than the sum of its parts...if you know what I mean.

Rardin has a few quirks as an author that tend to disrupt the flow of the narrative - she has a tendency to slip into a description of what happened at some point days, minutes, or hours previously to get Jaz and her crew to where they are in the books without warning the reader that it's coming, so I've had occasion to wonder if I'm reading past events or current ones at times. That's mostly (but not exclusively) done in the beginning of each book, so you jump into the action right away, then find out how you got to that action a bit later. It's a little disconcerting. Another grievance I have is that Rardin has a tendency to throw everything and the kitchen sink at Jaz and Co. in a seemingly never-ending barrage of badness during each "mission" and in so doing, she sacrifices cohesion in the plot. I've never felt that any "mission" was written in any sort of easily followed, linear fashion and as a result, I haven't been able to really cheer for the CIA aspects - even when they're successful.

Oddly enough, that's what keeps each book from garnering a solid five star mark from me, yet it doesn't affect at all how much I love the series. Because the things I do love about the series, Rardin is absolutely fantastic with. And that's, quite frankly, the people. The characters. Their lives. Their feelings. Their...story.

Jaz Parks is a tortured, flawed, and in some ways slightly nutso heroine whose loyalty and bravery are unequaled. She's got a dark side - a very, very dark side that she hides from the people she's sworn to herself to protect, yet she carries on funny and insightful conversations with her dead grandmother...in her head...as Granny Mae plays poker (or canasta or whatever) with Bob Hope and Abe Lincoln.

Vayl is a nearly three hundred year old vampire and while he's the country's top assassin - holding that position for the past eighty-some odd years, he's got his own baggage. Industrial-sized and hefty weight baggage in the shape of two sons lost centuries ago. The drive to find their reincarnated souls pushes him for so long that they are the reason for his entire existence - until Jaz Parks blows into his tattered soul and clings.

Their relationship is complex, fraught with insecurity and past demons, yet changing and strengthening through each book. I'm a paranormal romance fan - and while this isn't what I'd consider a romance-laden series, it's still satisfying the romance lover in me. It's written brilliantly, and in a very satisfying way. And I can't say enough about the wide and varied array of secondary and ancillary characters that have wormed their way into my heart. There are a legion of them, and they are vital to the series as a whole - and written as three dimensional and as important as Jaz and Vayl. Kudos on that.

So it all boils down to this...I didn't give a synopsis of the plot Bite Marks because the main plot of each book isn't really why I read the series. I suppose I could say that Jaz and Vayl have another mission and all hell breaks loose on this one, just like on all the others. That's the quick and dirty. And largely unimportant (to me). It's the fierce artistry in how they handle it and how Jaz manages to continue to triumph over past traumas and losses one labored step at a time that is really the driving force in the series (for me) and that just can't be summarized easily. You just gotta experience it.

Okay...and I admit...I just have to know what Bergman's going to dream up next. *snickers* Robokitty. Hee!