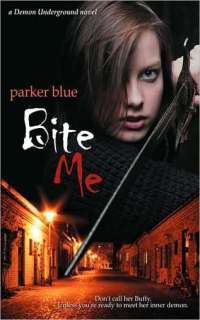 Val Shapiro is having a really bad day. It's her eighteenth birthday and the 'celebration' has included killing a vampire and being ostracized by her family. They kicked her out of the house, fired her from the family owned and run bookstore, and forbid her any contact with her younger sister, all because her mother - quite possibly the maternal unit least likely to win any Mother of the Year Awards, thinks her oldest daughter...who is mostly human (it's the 1/8th lust demon part that bothers her)...is a horrible influence on her youngest daughter (who's fully human, but doesn't have the sense given a Tsetse fly).

On the bright side, Val found a dog (sure, it's part hellhound, but it's wicked good at sniffing out vampires, understands English and can speak in Val's mind), got a job (which may or may not cause containment issues with her inner demon who Val refers to as Lola), and got a new place to live (with the sister of her new SCU cop partner, and Val doesn't think a roommate is quite the way to hide her...uniqueness), but still, things are looking up. They don't look up for long, however, and soon Val and her partner Dan are on the case of a rise in vampire deaths and a new vampire movement in town. Threats to her family and to her new friends are rising and the city of San Antonio is getting more and more dangerous at night, but Val's determined to stop evil from spreading. The only question is, will determination be enough?

Without a doubt, there is something appealing about Parker Blue's YA Urban Fantasy book, Bite Me, especially for any Buffy fans out there. There are definite similarities, but to be fair, Ms. Blue acknowledges both the similarities and the differences, and frankly, I like Val Shapiro a heck of a lot better than I ever liked Buffy Summers. The show, however, had the complexity of plot and depth in mythos, originality, and creativity that this book lacks.

I have to be honest, I'm not very familiar with YA novels, so I don't have any idea what the standards are, and I don't want to seem overcritical because of that. That being said, I thought Bite Me was okay for a simple, sort of two dimensional story without a particularly well developed plot where the action wasn't completely realistic and the idea of anything resembling even nominal police procedure was absent. It wasn't a bad book, really, but it lacked sophistication and complexity at every turn.

On the good end of the spectrum, I actually really enjoyed Val's combination of youth, innocence, and aggression and felt bad for the family hand she got dealt. I loved Fang, her hellhound/terrier mutt, and he and Val were by far the shining lights of personality among the characters. Dan was okay, if a little underdeveloped, and there's hope for Val's distant cousin, Micah, too. The drawbacks to the story, though, were quite noticeable, and while I didn't have any problem zipping through the book - it didn't bore me - I did think that it lacked any real conflict or struggle, and the one it offered up just didn't seem to develop that cleanly. The resolutions that occur through the story to what few minor plot threads exist, along with the resolution of the overall story arc all seemed to come a bit too quickly without much conflict and the only one who seemed in any real danger was a character I wouldn't really have minded being offed to begin with.

I don't know if Bite Me is a standard in YA novel, but I've read some Harry Potter and a few other things (though it's been quite a while) so I don't think YA has to be synonymous with simplistic, and that's the impression I got by the end of the read. It's not a bad book, but it is a simple one. I think kids would like it, though, and can see younger teenagers enjoying it and empathizing with Val's family and social plight. There is a sequel out now, the second in the Demon Underground series, Try Me, but I don't know that I'll be continuing with it. The story has some bite, just not quite enough bite for me.

Return from Bite Me to Urban Fantasy Genre

Return from Bite Me to OGBDA Book Reviews Home