Lots to Devour in this Small Bite 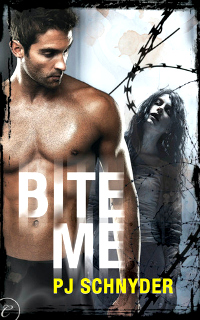 Disclosure:   A copy of this book was provided to me by Carina Press via NetGalley.

The scream that rips through the night while Seth is on patrol is, sadly, not an uncommon sound for the werewolf shifter and London pack's Alpha. Not since the zombie outbreak turned London into a literal dead zone. As common as it may be, though, Seth has no intention of letting it go unheeded. Chasing the echoes of the scream into the nearby park, Seth is stunned to see a pretty human woman standing over a small family, fiercely protecting them, her guns blazing at the horde of walking dead attacking them.

Maisie knows she's in a world of trouble. Her ammo is running out, the people she's trying to save are so petrified they can't even help themselves, and the zombies attacking aren't acting like the zombies she's depressingly familiar with. These are faster, their attacks coordinated.

The huge, half-shifted werewolf that suddenly appears and starts tearing through the zombies with brutal efficiency startles her at first, but Maisie can hardly complain about the much-needed assist. Maybe she'll live through the night after all. But if these new, faster, more intelligent zombies are indicative of a shift in the zombie population, it's going to take more than a sexy alpha werewolf and a tough chick with guns and a limp to save what's left of London. It'll take a miracle.

Wow, this was such a fun read. Frankly, I wasn't expecting to like it nearly as much as I did. I'm not a fan of zombies, so I tend to avoid books that feature them, but I was curious about the mix of shifter romance and zombie apocalypse in this novella. I thought I'd give it a chance, but my expectations weren't high. By the end, every one of those expectations were greatly exceeded.

Despite the short length of this novella, there is an abundance of world building, plenty of action, and enough depth of character that both Seth and Maisie were more well-rounded than I'm used to reading in stories of this length. And the tale is written with a fast, engaging style and has a healthy serving of humor that appealed to me, despite the bleak post-apocalyptic London setting and the zombies that made it that way.

Both Seth and Maisie were quirky, completely likable characters, especially the indomitable Maisie, who I adored, and their chemistry was off the charts.

The relationship between them built up a lot faster than I normally prefer in my romance, as the entire story timeline takes place over a couple of days, but Seth and Maisie acknowledge that in the narrative, and that, along with the fact that Seth's werewolf nature allowed for a bit more leniency from me about that, served to mitigate any serious issue with how quick they get to their Happily Ever After. Or...well...potential HEA, as the Ever After in the story is fairly dependent on those zombies being dispatched sooner rather than later.

One of the things I liked most about this story was the wealth of emotional baggage each character is dragging around. Seth has the weight of his responsibilities as pack alpha and the lingering damage from his former lover's betrayal. Maisie is still struggling with the guilt from surviving the zombie attack that killed her family and has a damaged leg and a permanent limp as a daily reminder. Neither one of them were exactly normal and well-adjusted, but both of them were just three dimensional enough to keep from coming off as cardboard cutouts of real people.

There were a surprising number of twists and turns in the plot given the story's shorter length, but I do wish there had been a bit more attention given to fleshing out and better defining the external conflict of the story. That particular plot element was fairly thin, with so much of the story space having already been allotted to building up the foundation of the world and the characters themselves.

It actually took me awhile to recognize that there was a specific thread of external conflict going on in the unusual zombie attacks occurring around the city. There was just so much else to focus on that it didn't even occur to me that the tidbits of information about them were being woven into both this particular story's arc as well as the larger series arc until the story started cresting into its climax. Because of that, the end of the story seemed a bit rushed to me and didn't quite answer all the questions I had, nor resolve all the issues.

I wish this had been a full-length novel. And not because I would have liked seeing one or two elements have a bit more room to really be explored in the story...though that is part of the reason. Mostly, though, I just wasn't ready to be finished with Seth and Maisie's story. I loved them so much as characters and a couple that I wanted to spend more time with them both. On the bright side, if Schnyder's goal, like P.T. Barnum's, was to leave them wanting more, Schnyder achieved the hell out of it. I want more from her as an author and more of this series.

Return from Bite Me to Paranormal Romance

Return from Bite Me to One Good Book Home