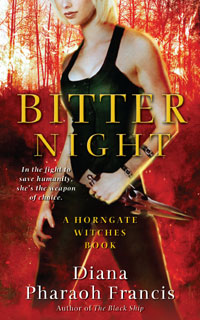 Thirty years ago, she thought a hangover was the worst that could happen when she went out with her college roommate for a girls night out. She was so very, very wrong. Enslaved and stripped of her humanity, she was turned into a being that is infinitely harder to kill but contained and constrained through magic, spelled by compulsion to protect and defend the young woman she thought was her friend. Max has been struggling against that enforced slavery ever since, even as she has risen to the position of Shadowblade Prime, leader of the night warriors and counterpoint to the Sunspears, who battle and protect her old college roommate, the witch Giselle, during the day.

Resentful and full of rage even now, and always waiting for an opportunity to slip her gilded leash and kill the witch who holds it, she is still Giselle's most powerful and effective weapon, first line of defense and offense. It isn't until beings of godlike power, the Guardians, declare war on humanity in an effort to bring back and balance the magic on earth, calling on witches and their warriors to be their army, that Max starts to realize that beyond the hatred she has for Giselle is a sense of responsibility and concern for her fellow Blades and Spears, and a sense of home in Giselle's territory, Horngate. The Guardians may be knocking on their door, but Giselle has no intention of answering, and for once, Max and her oldest enemy are of like minds. With a growing group of people she's just now realizing are friends, Max will stand against the Guardians in their attempt to decimate Horngate or bow Giselle to their will.

War is coming, but in all wars, there is always a first battle, and Max stands at the front of the line to fight it.

Diana Pharaoh Francis kicks off her action packed Horngate Witches series with a complex, complicated lead character and a wealth of unique and original world building and mythos. Max is a real treat. Her years since being forced into becoming a Shadowblade have honed her into a steely force of dangerous will, a female of death, and she skates the line of feral self destruction. She's sarcastic, wicked, wild, and has a dark sense of humor. She's ruled by a fierce code of honor and is dedicated to those in her charge. Her relationship with Giselle, however, is a fascinating dichotomy and, for me, one of the biggest draws of the book. I've not read anything quite like it before.

Once close friends, Max now openly loathes Giselle and often tells the witch of her intention to kill her. Giselle has tortured Max and done unspeakable things to her, yet she's not exactly a despot, and her territory is full of people who serve and protect her willingly. And as much as Max dislikes Giselle, she acknowledges her inherent strength and willingness to protect her people. It is a complicated, sometimes odd relationship with a wealth of development potential.

The plot is also nicely layered, with a conflict and its subsequent fall out between witches Giselle and a real nasty piece of work, Selange, as one of the major plot threads. It worked nicely as both a lead in and a compliment to the wider, apparent series arc of the battle against the Guardians.

The pace is break-neck, and the action fierce and brutal. Francis' characters can and do take a lot of punishment. There is not an overwhelming depth to the world yet, and Francis tends to describe more than explain, so there's a lot left unknown, but that didn't lessen my enjoyment of the read.

I had a couple of issues that did, though. While I really enjoyed Max, I had a problem with Alexander. I liked him well enough, I just didn't think he was as strong a character as he should have been given his position. It weakened the parts of the story in which he was featured. There was an odd old world feel to his speech and actions, which was fine, I guess, but it didn't always blend well with Max's more contemporary nature. And I'm not sure I totally bought into the building blocks of the romantic relationship between him and Max. It read more like I was being told that there was a romantic connection than experiencing it evolve naturally through the story.

I also had an issue with the sometimes overwhelming amount of description. I wish there had been a more even distribution between description and explanation. Knowing which road the characters were taking on the trip from here to there and getting a clear picture of all manner of landmarks and scenery encountered isn't as important to me as having a greater understanding of the world at large and the people who inhabit it. Secondary character development in particular suffered because of it. In that regard, the narrative occasionally bogged down but still left many, many questions unanswered.

Even with those issues, though, I'm excited about this series. Max is a great character and her relationship with Giselle was fantastic reading. I'm perfectly okay with some unanswered questions as the series unfolds, and will wait to see how the world continues to develop in future books, but I do hope that Alexander is written with a bit more strength if he's going to continue to be a romantic interest of Max's. I love that the female is the leader in their relationship, it's a nice role reversal, but there needs to be some tweaking for me to really get on board with it. Generally speaking, though, this is a good, strong urban fantasy series and despite a few issues, it offers up non-stop action and a heroine who won't quit. 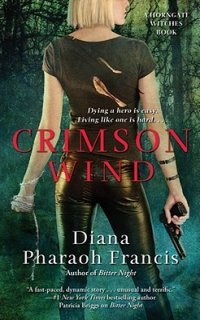