Written With Artistry But Lacking....Something 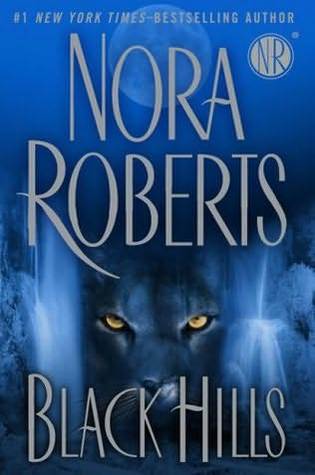 For years I've read Nora Roberts books, always considering myself a huge fan. Whether contemporary romance, paranormal romance, or romantic suspense...whether stand alone books or trilogies or short series...I've always counted on Roberts for a sweeping romantic read that satisfies as it entertains, and for years she's delivered. Some books, of course, I've liked more than others. Some series or trilogies have hit closer to home than others. Some characters I've liked more than others. That's to be expected, I suppose, when you favor an author that produces such a wide range and so many opportunities to read.

And saying that, I can honestly admit I enjoyed Black Hills. It wasn't my favorite effort, but I did enjoy it. The story of Lil and Cooper, two people who have loved each other their whole lives, who knew the love of best friends as children, the world-ending romance of young love, and the sometimes too realistic love of adults, was definitely comprehensive and at turns sweet, romantic, and sensual. Their characters were palatable enough, though I always felt that Lil had a bit more life in her than Coop did, and I very much enjoyed her profession and her passion for it. The surrounding threat of a serial killer loose in the Black Hills of South Dakota was reasonably represented and blended well with the romantic narrative, as do most of Roberts' efforts in this sub-genre. And yet...

Without a doubt, Nora Roberts has written some of the best romantic suspense out there. Montana Sky was a personal favorite of mine, as was River's End and Carolina Moon, and those are just off the top of my head. In those books, and others that I have read of Roberts, the characters and the tension in the story combined with the romance to bring me into the book with almost lyrical effortlessness, until I cared beyond reason for the lives of the characters and their love and safety. I can't say that Black Hills evoked that same sort of passion in me, and that's a true shame.

Like I said, I liked the characters - Roberts is excellent at filling her book with both lead characters and secondary and ancillary characters that could be neighbors, relatives, friends, they're so often recognizable. So comfortable. But for some reason, Black Hills didn't connect me to them as other books of hers have done, so I never quite reached that reading nirvana of feeling like I'd stepped into the book and had it surround me, capture me, and force me into experiencing it on a visceral level. And I can't say I'm sure why it didn't happen here.

Maybe it was the writing style. The flow of the narrative struck me as odd through most of the book...there was a very artistic structure even to the dialogue that read more like a painting of words to stand back and admire aesthetically than a flowing, living story that sucked me in. Several important scenes in Black Hills, scenes that would have given a reader a much more personal experience with these characters, were sort of glossed over or mentioned in a past tense...like the big scene between Lil and Coop that split them up for almost twelve years. Or the scene in New York that closed the door on Cooper's career on the police force. Or Lil's breakup with Jean-Paul. The way this story unfolded, with significant scenes happening outside of the reader's awareness and having them told instead of experienced, I think, hindered the intimacy between character and reader and kept that relationship at a far more superficial level than I'm used to in Nora Robert's books. At least...I think that's part of the reason.

I also never quite got any sense that I was able to feel what Lil and Cooper were feeling for each other, and Cooper in particular was a far more stoic character than I prefer. The words for his love for Lil were there...eventually...but by then he'd put off such a phlegmatic air that I had a hard time pinning him down. He seemed rather joyless, even proclaiming his love. Dedicated, yes. Unwavering, yes. Determined, yes. Happy about it? Not really. That didn't connect well with me. In that regard, the simple joy between Tansy and Farley in their relationship was more appealing to me as a reader.

I liked the story. I'm still a fan of Roberts. And I'm not one of the many critics who think she's jumped the shark as an author and is now just regurgitating romances and scenes and dialogue with each "new" book. There were parts of this story and characters in it that I felt worked very well. But I've seen her do better. And I was hoping that Black Hills was one of the better ones. It just...wasn't. Not quite.

Return to top of Black Hills