Didn't Totally Fly For Me 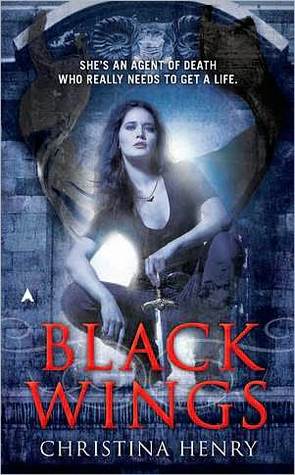 Madeline Black knows death. Not personally, really, but certainly more intimately than most. She is, in fact, an Agent of Death. Much like a junior associate at any major corporation, she's fairly low on the totem pole, but she and other agents like her get their weekly assignments of impending demises. It's her job to go out and collect the recently departed souls, give them their choices, and guide them to the door.

The Door. The one between the living and the dead, between this plane of existence and whatever is next. Maddy has no more an idea of what's beyond that door than the normal mortal. No one does until they go through it themselves, agents included. Maddy's in no rush to find out for herself.

Pity for her, then, that someone or something wants to hasten the process along.

When her best friend is killed and she comes face to face with the monster that killed and - god - maybe ate his soul, Maddy's horror knows no bounds. She barely survives the experience, but not before the creature tells her that he's the thing that killed her mother. And now he's coming after her.

With a suspicious new tenant who is more gorgeous than human, a mysterious increase in demon encounters, and a sudden massive fluctuation in her own magical ability, Maddy's life is suddenly thrown into chaos. The kind that will kill her if she doesn't figure out what's going on around her, what part she has to play in it, and who she can trust. Without those answers, Maddy will end up just as dead as those she guides.

It seems I can't crack an urban fantasy book lately without brushing up against some sort of angel mythos. That wouldn't be a problem if I liked angel mythos, but it's not my favorite thing. I don't hate it, but it's very hit-and-miss for me. In this one it was more of a miss, but part of my problem with it in this case was the confusion created by the delivery, as opposed to the proposed mythos itself.

There was a lot going on in the plot of this book, a couple of different factions trying to put an end to Maddy's life, and a lot of people creating chaos in that life. It certainly made it hard to keep the rules of the world straight, because the Bad Guys don't follow them, yet Maddy was often held accountable for them. I wish the story had been a little more streamlined, or that some of the developments had been held off for later books. I think it would've helped both with my big picture comprehension and with the overall appeal of the book.

I didn't mind Maddy as the lead character, so that's a plus. She was fairly standard for the genre with her irreverent nature and her trouble with authority. Much more wise-ass than bad-ass, but I have to admit, I'm a fan of the snark. Her gargoyle Beezle provided some amusement as a secondary character, too, but her new tenant Gabriel didn't really work for me as the love interest. His backstory was interesting, but I didn't feel the chemistry that I was being told existed between him and Maddy. Instead I felt a bit emotionally manipulated by their relationship restrictions.

A few things about the story threw me off. I thought Maddy's reaction to her friend's death was oddly unremarkable. Her sudden power upgrade struck me as not only too convenient but also a bit contrived, and gave her a vibe that tread dangerously close to being Mary Sue. I didn't like the sudden declaration from her boss at the end, either. That came out of nowhere and just seemed to muddy already heavily muddied waters.

Muddy water actually about sums up how I feel about the whole read. There was nothing I could point to and say that it was unequivocally bad or that I didn't like it, per se, but there wasn't anything of particular merit that stood out as unabashedly awesome, either. The story was a little muddy, the characters a little pedestrian, and the mythos a little convoluted and not to my personal taste. It was, for me, just an okay read.