A Better Book Than Its Cover 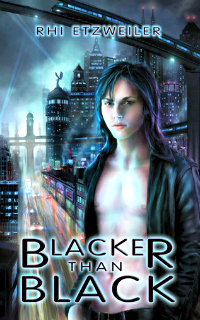 Black knows all about the dark underbelly of life. He should. He lives it every night. He and his twin sister were little more than children when circumstances forced them to the streets. Now they're Nightwalkers, selling themselves to survive.

Not sex...or blood, for that matter. Their vampire johns - Lyche, they call themselves - don't drink blood, and sex has never been one of the services the siblings offer. Besides, vampires have other needs. What Black and his sister sell is their chi, their life energy.

Hey, it's a renewable resource, and vampires pay well for it. Not that the transaction is risk-free. Quite the contrary, especially as he and his sister don't just sell their chi. They steal vampire chi for themselves in the process.

Turns out, their johns don't appreciate that much, a fact that becomes painfully clear when Black taps the very last vampire he should have anything to do with, Monsieur Garthelle. Not only is Garthelle the top vampire in the city and the law of the land, but the chi tap Black did on the guy goes wrong in a way that no other has.

Now he's got two choices. Either he lets Garthelle turn him and his sister into his two pet spies during some swanky party thing the vampire is holding for his nearest and dearest not-exactly-friends, or Garthelle will end them both.

Which really isn't any choice at all, is it?

With a fresh and original twist on vampire mythos and a complex and intricate story, Etzweiler's Blacker than Black was a much more entertaining read than I was expecting based on the cover alone. No offense to the art designer, but wow - that cover does this book no favors at all. Fortunately, both the atmospheric world and Black's travails after biting off more of Garthelle's chi than he could handle made up for it nicely.

I loved the mystery and investigation surrounding the murdered Lyche, and the world that Black and his sister are surviving in has just enough of a touch of slightly futuristic dystopian nightmare to give it a seedy, humans-are-second-class-citizens-at-best flavor but not so much that it turned me off (I'm not normally a fan). It was a nice balance, and all the meatiest plot threads were woven together in a way that slowly revealed more and more pertinent details about the characters and the Lyche culture.

It wasn't love at first chapter for me, though. I have to admit, I had to work at it a bit in the beginning. Black is narrating his story in first person perspective. Nothing unusual about that; a good majority of urban fantasy fiction is the same. What was unique...and, for me, off-putting, was the present tense in the telling. It made the beginning of the book in particular feel a bit odd and jarring, and I was well into the story before I realized I was no longer getting jerked out of the read every few minutes by the style of the narration.

The fact that Black wasn't my favorite character didn't help matters, either. I didn't dislike him. He had several good points. I just didn't think he was all that strong as the lead character - especially in comparison to his sister, who I loved. Black tended to focus too much on the fallout of his tap of Garthelle's chi for my taste, shortchanging the story's potential for more comprehensive world building and additional plot depth.

And because the story is being told by Black, who is almost completely ignorant of Lyche culture and all the labyrinthian politics, obfuscated loyalties, and seemingly cross-purpose agendas, he didn't serve as a very good source of information about them as the story progressed. I was forced to learn what I could as Black did, around his obsession with fighting off the effect of Garthelle's chi. There just wasn't sufficient explanation for me to be able to fully immerse myself in the world, or be consistently solid on was going on in it.

I liked what there was, don't get me wrong, and some of it I liked a whole lot. There just wasn't quite enough of it for me.

Black's sister would have made a stronger protagonist, I think (though that would obviously have put the kibosh on the M/M leanings). She was brash, cagey, independent, and showed no fear, even when she felt it. And she loved the hell out of her brother, which softened her roughest edges nicely. I was saddened to see her so underutilized in the story, but every moment of page time she got improved whichever scene that included her.

Garthelle was the other character that really worked for me. I can't say I feel like I knew him all that well by the end, and I still don't completely buy his motives or the wisdom of the decision to bring Black and his sister into his situation, but I loved his inscrutable, stoic exterior, especially when it was so clearly covering up a much more vulnerable side of himself. His machinations were deliciously Machiavellian, but those moments when he let his guard down around Black were some of my favorites of the book.

It all set a nice foundation for the personal conflict between him and Black, but as most of Black's best efforts were made with the hopes of getting out from under Garthelle's influence, it threw a monkey wrench into the arc of the romantic relationship between them. I just never felt they were ever on equal footing - neither in Lyche culture nor in the relationship that slowly develops between them. That put a serious crimp on the romance-flavored aspects and made some stuff at the end of the book not quite as satisfying as I would have preferred.

If this was a first book in a series, I think most of my other issues with parts of the story - an abrupt ending, the odd relationship jump between Black and Garthelle, and the myriad questions that lingered after the final page - would have been largely mitigated. Plus, I'm greedy. When I'm impressed by the originality of a book's world or the freshness of the plot, I can only want more.

This book begs a sequel. Or a series. As a stand alone it was entertaining, if not always consistently so, and I liked it. If it was the start of something bigger, it may have been love by the end. For now, I can only hope to see more of Black and Garthelle...and Red and Blue, for that matter...at some point in the future.

Return from Blacker than Black to LGBT-M/M Urban Fantasy

Return from Blacker than Black to One Good Book Home