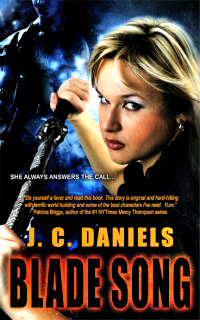 Disclosure:   An ARC of this book was provided to me by publisher Shiloh Walker, Inc. via NetGalley.

It's not like Kit Colbana is happy to take a job for the alpha of the cat shifters. There are a lot easier ways to die if she were feeling that suicidal. Even though her small business is light on cases lately and she's feeling the pinch financially, she would have turned the job down flat, no matter how lucrative the proffered fee. But the job is finding a runaway kid, and Kit, part private investigator, sometime thief, preferred courier, resolute bounty hunter, and even occasional assassin, has a genuine soft spot for cases concerning kids.

She also has a true gift for finding things. It's in her half-breed blood. Kit's father may have been human but her mother had been full-blooded aneira, a race of ancient warriors versed in magic. Her blood gives Kit a unique set of skills perfectly suited for finding things like a lost cat shifter kid. And when her investigation into his disappearance reveals that there are more children missing, it also gives her the ability to stop those responsible.

Well...she hopes it will, anyway, as Kit has no intention of stopping until either she's dead, or the monster responsible for the kidnapping and murdering of children is. It's just her bad luck that her human half tends to be a lot easier to kill than any of the baddies she's going to be facing on this case. Life sucks that way.

J.C. Daniels, nom de plume of prolific author Shiloh Walker, kicks off her urban fantasy series debut with a strong, stubborn heroine with a smart mouth and a lot of confidence in her own deadly skills. The world of the Colbana Files drew me in, exciting and intriguing me from the first page, and the setting, being a Florida girl myself, had great appeal.

I liked Kit. She's maybe a bit typical for the genre, a kick-ass, sarcastic warrior woman whose mouth writes checks her oft-abused body ends up cashing, but she's amusing, especially when she's picking at Damon, and her hyper-vigilant caution around creatures who could so easily end her keeps her real. She's a troublemaker, surely, and man, she's abrasive at times. She's also deeply damaged by a torturous childhood that still haunts her and tends to rush headlong into danger, but she's also got a code of honor and is loyal to those very few people she trusts. I actually liked her very much, even when she was frustrating me.

I can't say the same for Damon, the cat shifter who practically glues himself to Kit's side while she's on the case. Well, I could, but it would be a gross understatement. I loved him. Loved. Him. He's all kinds of sly, dark danger and secretive, stalking seduction. He's the complete package and I adored every shiver-worthy second of every scene he was in.

The character dynamic between him and Kit was great, and while there was also a plot thread of romance there...eventually...I can't say it was my favorite element of the read. It was just a little odd for me. That there was a thread of romance at all, though, did appeal. Call me a big softy but I prefer at least some romance in almost everything I read.

That's not to say I'm a fan of the ubiquitous love triangle. In fact, I have little patience and less tolerance for anything even vaguely resembling a love triangle. I was a little worried about the vampire Jude at times because of that. Worried, and then surprised as the plot progressed, reached the climax of the conflict, and resolved. His presence in the book didn't evolve into what I was worried it was going to evolve into, I'm happy to say, but I was definitely affected by his character in the story. And that's all I'm able to say without risking spoilers, so I'll leave it at that.

Some elements of the read weren't as successful for me as others. The characters and story as a whole were solid, the well-drawn world full of plenty of deadly threat, but I had some issues with info dumping in the beginning and the ending felt rushed to me. And I'm still not sure I completely bought the motivation and actions of the Bad Guy in relation to the hunting. Sure, the guy was evil incarnate, but I still can't figure out why he did some of the things he did..

In truth, those issues were relatively minor and didn't take away much from my enjoyment in this read. I just liked Kit and Damon too much, and their story excited me. I've struggled with several urban fantasy series I've tried lately, but this one held its appeal throughout the tale. With a damaged but likable heroine I appreciate and a dark world full of danger at every turn, this debut gives me hope that I've found a new urban fantasy series that will provide chills and thrills for a long time to come. I look forward to being along for the ride. 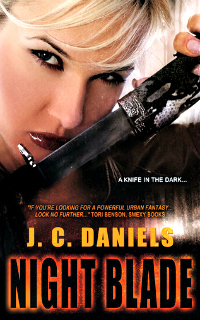 Return from Blade Song to One Good Book Home