Blame It On Cupid

The Right Stuff at the Right Time 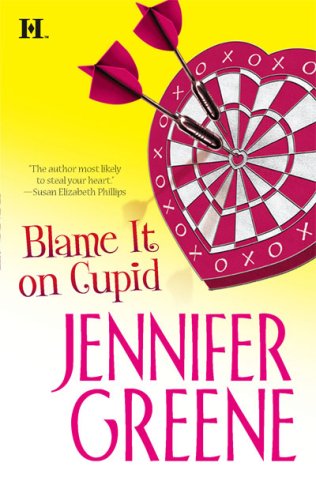 Footloose and free spirited Merry Olson didn't expect that the guardianship agreement she signed on a napkin a decade ago would ever result in her pulling up stakes in Minnesota and haring across the country to Oakburg, Virginia, but when the lawyer of her friend Charlie called and informed her of his sudden death, she had exactly one thought: to get to his daughter as soon as humanly possible and wrap her up in as much love as the eleven-year-old could stand. Not that the young, childless Merry had the first clue about raising children, but she'd been a girl of eleven once and she knew the pain of losing a parent at a young age, so she figured she could relate, and she was sure that all Charlene needed was understanding and love, sympathy for her tragic loss, and some girl bonding. And that's exactly what Merry was going to give her.

Unfortunately, it didn't take long for Merry to realize that she is completely out of her depth with the unnaturally reserved tomboy with the shaved head and over-sized clothes and who wants to be called Charlie, has no clue how to handle the soccer mom gig in an upper class suburbia so far outside of her ken as to resemble foreign soil, and is terrified by the legal mumbo jumbo related to the court appointed guardian ad litem who she's convinced will judge her unworthy to care for Charlene. Merry is way over her head and sinking fast. Thank goodness her neighbor Jack Mackinnon is such a hero. She doesn't know what she'd do without him.

The woman is a big fluffy female menace who gets lost trying to navigate her own driveway and is a danger to herself and everyone who knows her. It took Jack all of about five minutes to figure Merry out. Well, five minutes and the fully decorated pink Christmas tree...in the middle of January. Still, it's like his new neighbor is some mysterious vortex and he just keeps getting sucked in. Maybe it's because she's so darned pretty. Maybe it's because she's so obviously clueless but so determined to provide for his friend's daughter. Maybe it's just because Merry touches his heart in a way that he hadn't realized he'd needed his whole life. Whatever it is, he's captivated, and the longer she's in his life, the more he realizes he doesn't ever want her to get away. Telling her that, though, may be a little harder than he'd ever dreamed.

Every once in a while I come across exactly the sort of book I most need at exactly the point I most needed it. Laid up with the flu for days, coughing up a lung (or two), feeling icky and ready to do just about anything to brighten my mood and take my mind off everything, I went looking for a light romantic comedy or a light contemporary romance. I was hoping for something on the empty-calorie side of brain candy. My sweets craving got more than satisfied by Blame it on Cupid.

I have to admit, as a longtime and proud tomboy myself, I related a little more with wounded Charlene (and I'd want to be called Charlie, too, regardless) than pink bunny slipper-wearing, petticure-loving, fluffy Merry, but there was something about the woman that drew me in. Flighty women like her usually annoy me pretty quick, but she was so big-hearted, so earnest in her care for Charlene, so dedicated to do as good a job as possible...and funny. Merry was funny. By the end I sort of adored her.

And then there was Jack. Sweet, clueless, hit-by-the-Merry-truck Jack. A bit of love 'em but don't love them sort at the start, a guy still feeling the sting of an ex-wife who cared more for her job than him so he doesn't get emotionally invested, he's also the guy that stomps across the yard in the snow, cursing Merry the whole way, only to shut the door she forgot to close, or the guy going over to the dark house to find out why the electricity isn't working despite having a date, or the one who is slipping into his jacket to go lend her a hand even as he's questioning his sons about why they think he'd do exactly that.

I loved him. I loved them together. And I flat-out adored how Greene developed their relationship among some other very valid and sometimes surprisingly deep plot points and threads. Issues such as the unique pain of losing a parent at a horrendously young age, gender identity, teen pregnancy, sexually transmitted disease, the heartache of first love, raising children in a modern age when sleepovers are coed, the often ravaging but sometimes subtle damage that divorce and parents' choices can have on impressionable children and teens, and several more very significant and relevant issues were all touched on to varying degrees. They added a surprising amount of depth and quite a bit of meat to a story that could have stuck with a more superficial but humorous romance and still been entertaining.

There was just so much I enjoyed about this book. Yeah, I had the flu, and I sure wasn't feeling at all good when I read it, but it kept me entertained through it all, and kept my mind off feeling cruddy. Call it chick lit, call it fluff, call it brain candy... I'll just call it a whole lotta fun when I needed fun the most.

Return from Blame It On Cupid to Non-Series Book Reviews

Return from Blame It On Cupid to OGBDA Book Reviews Home