The AMT is Terrifying 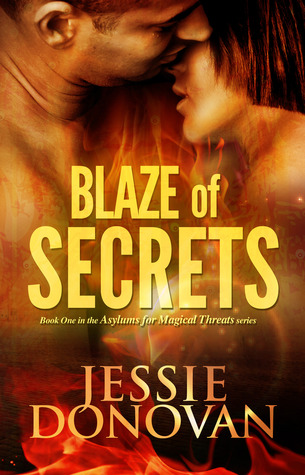 She is the first-born child of a Feiru mother in a world that hides her kind away in asylums out of a sick paranoia, fear, and prejudice. They call her elemental magic a threat to the unsuspecting human public. They keep her kind secret.

In those asylums they are stripped of their humanity and their dignity, used as lab rats, abused, and suffer torturous "medical" testing that often drives them insane, all for that nebulous Greater Good.

Now Kiarra Melini is left with a horrific choice: sacrifice herself to save her first-born brethren or sit idly by while the researchers at the asylum use her blood to strip the elemental magic from every other first-born they have interred in asylums around the world.

A tragic choice. A heartbreaking choice. But an easy one for the young woman who has been a prisoner of the Asylums for Magical Threats for fifteen years of her life.

She hadn't counted on Jaxton Ward swooping into her cell as she was attempting to end her life. She'd long since given up hope of ever being free from the AMT. Being kidnapped doesn't exactly instill in Kiarra a sense of peace and well being, though, even though Jaxton claims he's rescued her. After all, the AMT is the devil she knows. Jaxton and his anti-AMT group may prove themselves to be just a different sort of devil entirely.

Jaxton knew breaking into the AMT to get his brother and Kiarra out wasn't going to be easy, but he never figured Kiarra would rather suicide than be free. Now he's got to convince the woman he means her no harm and the rebel group he works with needs her elemental magic to fight against the very people who held her captive for most of her life. Training her is going to be a study in frustration, though, given the powerful attraction he has for the brave woman willing to die for her race.

Unique and original, this series debut by Donovan has a lot going for it, especially in the first half of the book. Kiarra was fiery, cagey, and keenly intelligent, and Jaxton was intense and sexy...and I'm a total sucker for heroes with a British accent. I enjoyed both of their characters very much, and the story was rich with solid world-building, action, and suspense.

I loved Kiarra's whole attitude and personality from the moment she's introduced as an AMT inmate through her dubious rescue and subsequent struggle to adapt to her new freedom. I think she was maybe a bit more balanced and sane than a person would be given what she's been through in her life, but I can't say I minded that for the purposes of the story. I liked her, and I was very pleased with the direction her character took following her rescue. That all worked for me nicely.

And full credit to Donovan for the creep factor and utter horror that was the AMT. I couldn't help but make comparisons to concentration camps in Nazi Germany and it was truly chilling. I find the sort of subversive, subjugating mentality that went into the creation and use of AMTs to be far more effective as a source of external conflict than an individual Big Bad because it's so damn easy to imagine something exactly like that happening, as it's happened before in humanity's darkest times.

I wish I could say I found the second half of the book as entertaining as the first. While the first half provided a solid foundation for the book, was well-conceived and written with a solid focus on fleshing out the world, defining the various factions and introducing the characters, the story took a turn for me at the halfway mark. As soon as Jaxton and Kiarra made it to Scotland and the external conflict became more significant in the plot, I felt like the book started to lose a lot of the cohesion it had established early.

There's a lot going on and it's happening to and with several different characters and their individual points of view. Between the evolution of the main characters, their relationship and all that entailed, their struggles to evade the AMT, the sinister- and almost ridiculously obscure - machinations of Bad Guy Sinclair, and the addition of Kiarra's brother Gio, who was a pretty big question mark to me and seemed an unnecessary source of ancillary conflict, there was too much to focus on. Too much was attempted and not enough of it had payoff. The plot's pacing bogged down and the story got a bit unwieldy and cumbersome.

At times I found myself getting bored - with Kiarra and Jaxton's relationship, with Sinclair's super secret and oh-so-nefarious plans, and with...whatever it was that Gio was trying to do. There were just too many sources of conflict, big reveals, and murky motivations, so many it all became white noise after awhile. It's a shame, because really, there didn't need to be anything beyond the AMT. The reality of those places and the driving force behind their existence is completely horrifying enough on its own to support an entire series of external conflict without needing all the other story detritus that cluttered the back half of this book.

I do think the series has a ton of potential, though, and there are more than enough interesting characters introduced here to provide fodder for many juicy stories to come. This one just didn't quite keep me consistently engaged beyond the story setup and the world-building, and a general sort of appreciation for the romance between Kiarra and Jaxton. Still, I can't say enough about how nice it is to read something that felt truly fresh and original. That alone is worth a lot in a genre glutted on same old same old.

Return from Blaze of Secrets to Paranormal Romance

Return from Blaze of Secrets to One Good Book Home