Blood of the Demon

No Sophomore Slump Here ~ Blood of the Demon is Excellent 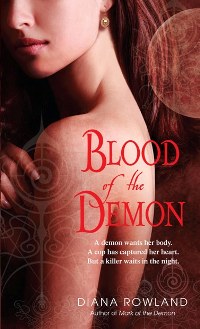 Beaulac, Louisiana's favorite homicide detective Kara Gillian is back in book two of the Kara Gillian series, and what a treat it is for readers! In this second book, which is perhaps even better than the first, Kara's just trying to be a good cop and a decent summoner of demons in the essence-absence of her aunt and mentor, Tessa, after dying...for a little while (courtesy of the demon Lord Rhyzkahl - the "little while" part, not the "dying") at the end of Mark of the Demon (Kara Gillian, Book 1). When a fellow officer is found dead from an apparent self-inflicted gunshot wound after apparently confessing to the accidental murder of his wife, it takes one look from Kara's "other sight" to know that something is horribly wrong with the scene. The question is, could Kara's demon summoning possibly be the cause?

As the bodies pile up and the plot rockets along at breakneck pace, this exquisite blend of taut cop thriller and unique urban fantasy fleshes out Kara Gillian's world in rich, layered tones, and with a deft hand, Diana Rowland pens a thoughtful, realistic background of police procedural that blends so sweetly with imaginative otherworldly creatures and mythos that the culmination of both far exceeds the sum of either part.

At the core of all of this, of course, is Kara Gillian, and it is where both books truly shine. No leather-wearing, hog-riding, shotgun-toting bad-ass heroine with a chip on her shoulder a mile wide here. Not that there's anything wrong with that, but the absence of such makes Kara Gillian stand out for her very normalcy. She's short, loves chocolate donuts way too much, can't hold a man, hell, can't even find one, and is so stressed lately that she's lost too much weight. Even her closest friends (all two of them) are concerned she's all elbows and knees and looking hauntingly exhausted as she plods her way through life just trying to keep her head above water. Of course, if dreams of Lord Rhyzkahl in all manner of delicious situations would give it a rest for a night, she might actually be able to get some sleep!

She's sarcastic and tenacious, got an insecure streak a mile wide, and she definitely doesn't know it all. She makes bad choices, risky choices, and choices that she just has to make even if she'd rather not. And she's dedicated to her job, believes in right and wrong, and protects those she cares for in any way she can. She could be you. She could be me. She could be any of us, and that's what makes her so unique. She's flawed, and she's real, and she's fun to read. Kara is what makes Mark of the Demon and Blood of the Demon stand out head and shoulders above the plethora of urban fantasy series out there. She's memorable that way.

The rest of the cast is back, as well, most notably FBI agent Ryan Kristoff, and the mix of endearing friendship and potential romantic tension between them is ratcheted up a notch by questions of just what, exactly, Ryan is and what he can do. Lots of things go unsaid between them. More go unexplained. All of it was captivating and tantalizing and I can't wait to read more. So too, the bond between Kara and the deadly yet honorable (to a point) Lord Rhyzkahl, who requests an odd boon from Kara while keeping his motives strictly to himself. And then there's that animosity between demons and Ryan, and why Ryan seems to know so much about things he shouldn't. Ah, it's all so delicious!

I had pre-ordered Blood of the Demon as soon as I could, and thoroughly enjoyed every bit of it. I personally found it a lot less descriptively gruesome than the first book in the series, and perhaps, if I have to say anything critical, a bit less tense as well. There wasn't quite the same level of danger to Kara and friends. I don't think that makes it less a pleasure to read, though, and where I'd rated Mark of the Demon a 4.5 stars, I have no need to qualify so with Blood of the Demon. This is a five star read, and perhaps surprisingly, well written enough that you don't have to read the first (but you should, because it's great). Rowland managed to sufficiently explain the occurrences in Mark of the Demon (Kara Gillian, Book 1) without beating the reader to death with exposition or dragging down the plot. Very well done, all around. I loved it.

Return from Blood of the Demon to Urban Fantasy Genre

Return from Blood of the Demon to OGBDA Book Reviews Home