Blood of the Demon

A Lighter Shade of Blood 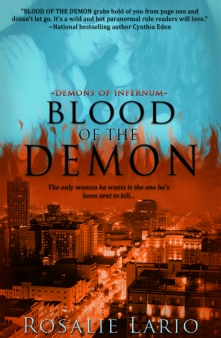 Disclosure:   An ARC of this book was provided to me by Entangled Publishing, LLC via NetGalley. This rating, review, and all included thoughts and comments are my own.

Brynn Meyers didn't know it, but the moment a tall, gorgeous stranger walked into her art gallery and drew her attention away from the use of her psychometric ability to gawk at his perfect body and shake his hand, her life was about to change forever. With his free hand clenched in a huge fist, Keegan knocked her out cold, then he kidnapped her.

But he felt really bad about it.

Keegan is a half-breed: part demon, part...something else, and he and his brothers are in our world to prevent an evil demon from finding an ancient magic text known as The Book of the Dead. Should the psychopathic demon named Mammon find this book and use the key to unlock its magic, he will raise an army of flesh-eating zombies and conquer first this world, then all the others. Keegan will do what he must, even destroy the key if necessary, to stop the vile, power hungry demon before Mammon kick-starts an apocalypse that will destroy the planet and echo through all the dimensions.

Neither the fact that Mammon is his father (no deterrent there), nor that the gorgeous Brynn makes Keegan yearn and sets his pulse pounding, will sway him from his course. Even if that course runs right over Brynn.

Brynn, after all, is the key.

Finding herself at the mercy of four men whose story of a secret government agency and protective superheros is suspect at best, Brynn feels far more like a prisoner than a protected asset. When a swift, vicious attack in her home unmasks the perpetrators as demons, however, and the truth starts to be handed over begrudgingly, Brynn's concept of reality takes a sharp, swift turn towards the macabre. The more she learns, the more danger she realizes she's in, and though it seems clear to her that Keegan wants her, the question becomes in what manner?

As his lover...or his victim?

My first experience with the writing of Rosalile Lario left me pleasantly surprised. Lario debuts this new series with a book that sketches out the world nicely but doesn't overwhelm, provides a sufficient amount of threat and danger to the main characters but doesn't mire them down in misery, offers up a sizzling romance with heat and emotion that evolves at a realistic pace, and sets up the next book well enough to keep me interested in what comes next. The infrastructure of a solid paranormal romance series debut was all in place.

That her writing style is easy to read, the narrative smooth and slick, and her primary and secondary characters had some quirky charm that made them all pretty darn likable was a bonus.

A couple of things niggled at me, though. Mammon was a truly nasty dude who commits heinous crimes, and Keegan and his brothers are set to kill an innocent Brynn if they can't stop him, yet the overall tone of the book seemed to disavow those and other dark points and ended up being lighter than I was expecting. I'm not complaining about the lighter tone - had Lario taken this book down a darker path, it could have been incredibly disturbing (some issues brushed upon: necrophilia, rape, child molestation, torture), but that lighter tone did occasionally seem slightly dissonant to the background activities of which readers are made aware.

Okay, I lied, I do have one complaint about the lighter tone. I think it's one of the reasons that there wasn't a better balance between the romance plot arc between Keegan and Brynn and the external conflict plot threads surrounding Mammon. There was too much time given to hashing and rehashing Keegan's responsibilities and his sworn duty to kill Brynn as he fights his attraction to her. While that created a nice tension at first, I think belaboring it was a mistake. There's literally no surprise in this book of what's going to happen - and what's not going to happen (it's a paranormal romance, not a Greek tragedy) - so ratcheting up the angst again and again over something that readers know will never come to pass just wastes time that could be spent further fleshing out characters, external conflict plot threads, and alternative potential dangers that could come to pass.

Instead, the whole mess about whether Keegan gives in to his attraction or stays resolute so he can kill her seemed protracted and repetitive for a good part of the book, and too much of Mammon's activities (and everyone else's) go on behind the scenes, so any progress he makes towards his grim goal was always startling for its abruptness when it was revealed. It also prevented Mammon from getting the page time to develop into a villain that should be truly feared - despite the known evil of his character.

I liked the characters, though. Brynn was a feisty soul, a fighter from way back who had to learn at an early age to take care of herself. She's quick to adapt and intelligent. Keegan's brothers were a hoot, too, and I loved when one of them blurted out some colloquialism they enjoyed or stumbled over a custom unfamiliar to them. Those scenes provided some slight comic relief and also expanded the readers awareness of them as characters.

Keegan was a delicious bite as the male romantic lead, but there were times when he got too broody and he tended to don the sackcloth and ashes a little too often (metaphorically speaking), flogging himself for his failures as big brother and refusing to see his nobility. He was a quintessential alpha male, damaged by the weight of his own definition of failure. It didn't make him unlikable, but it did suck the sexy fun out of a room now and again.

There were parts of the book that I thought were a little cheesy, parts that were harmless fun, and parts that sizzled. Some of the developments were a thrill, some held intrigue, and some were just disturbing. A handful of the actions of the characters were a little ridiculous, even slightly stupid, and one or two made me roll my eyes. A couple of plot points seemed a bit contrived, and the big conflict at the end could have been fleshed out a bit more and evolved a little differently. Still, there was more in Blood of the Demon that I enjoyed than that I didn't, and I think Lario has made a very nice opening gambit for the series with it. I'll keep my eye out for the second book, and for other tales by up-and-comer Rosalie Lario.

Return from Blood of the Demon to Paranormal Romance Genre

Return from Blood of the Demon to OGBDA Book Reviews Home